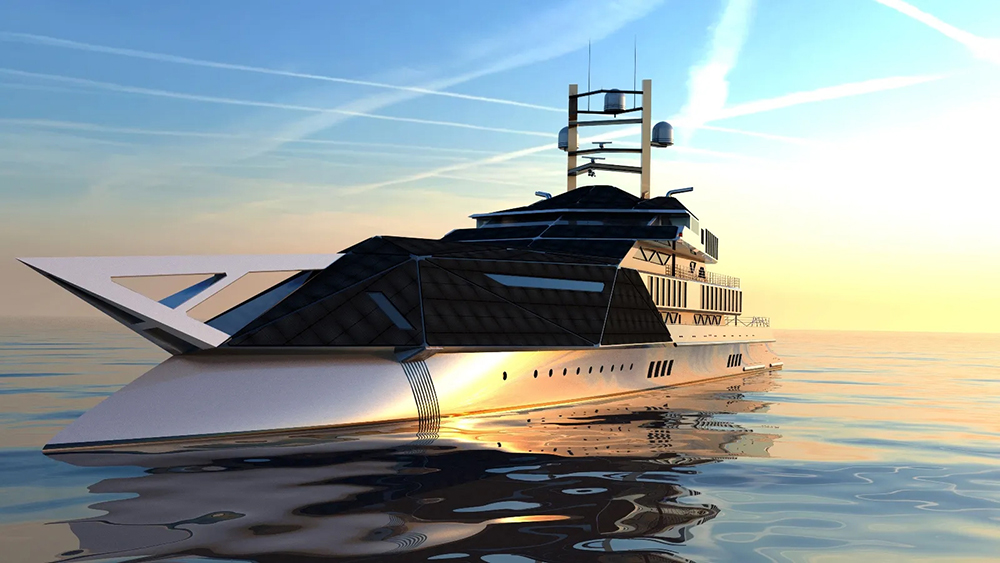 Sometimes a name can tell you everything you need to know about a superyacht. That’s certainly the case with Solar Express, at least.

The futuristic new concept, which was penned by Anthony Glasson of design studio M51, was inspired by steam trains like the one featured in the 2004 film The Polar Express. It’s also covered from tip to tail with solar panels for cleaner cruising. Hence the punning moniker.

Spanning an imposing 427 feet, the Solar Express sports a sleek, locomotive-like silhouette and a huge spike at the bow that Glasson says takes cues from a “narwhal tusk.” Looks aside, the vessel incorporates naval architecture that’s at the bleeding edge.

Glasson, who has spent a decade-plus working as an engineer on superyachts ranging all the way up to 295 feet, has centered the design on solar power. The foredeck, sundeck and stern are fitted with more than 16,000 square feet of solar panels. All the energy that’s harnessed from the sun is then stored in large batteries and used to power the yacht’s onboard amenities. It’s also used to power part of the hybrid propulsion system, which is comprised of twin Azipods and electric generators.

To improve efficiency, the Solar Express is equipped with a lightweight aluminum hull. She also features lightweight luxury materials throughout. Less excess weight allows for a greater battery capacity, though the firm did not give any figures regarding speed or range.

With a volume of 5,260 GT, Solar Express has a relatively small interior for her class. She also has fewer glitzy amenities than some other superyachts of the same size. This was a necessary measure to ensure there was enough space for solar panels.

“The idea behind the concept was inspired from my many years working as a crew member on large superyachts and witnessing the huge energy consumption first hand,” Glasson told Robb Report via email. “Solar Express is an attempt (far from perfect) to reduce fuel usage over the service life of the yacht.”

Suffice it to say, Solar Express is still plenty luxurious. She is fitted with two lavish VIP cabins on the upper deck that offer panoramic views, along with a large 33-foot swimming pool and a hot tub. You can also expect a sizable swim platform and accompanying tender.

Now show us a steam train that has all of that.