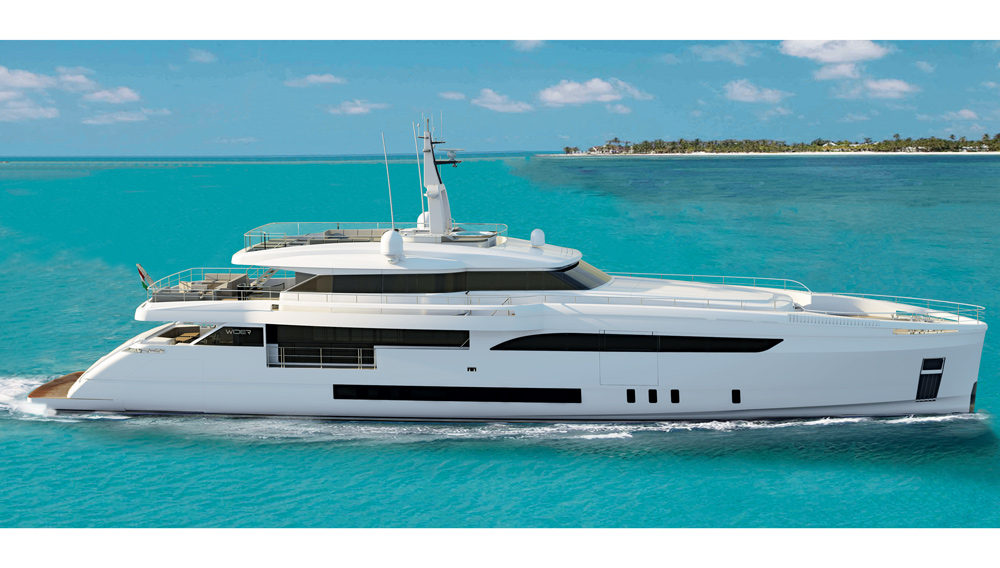 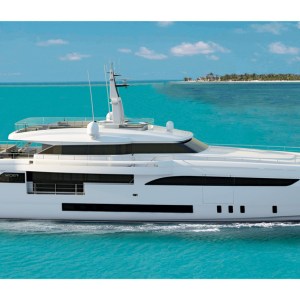 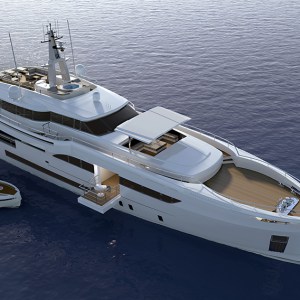 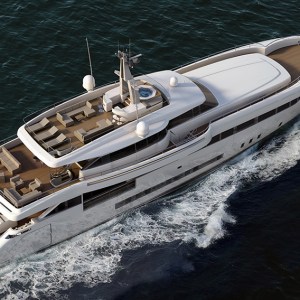 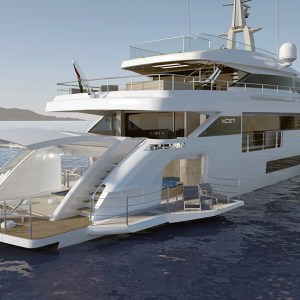 ❄ Wider’s new 150-foot superyacht.
❄ About $30 million
An evolution of the indoor-outdoor living areas on superyachts began 25 years ago, when Blohm + Voss launched Lady Moura. The 344-footer features a hatch in the starboard side of the hull that opens to a cabana. Later yachts were designed with balconies that fold out from the main-deck master suites; among these is the 241-foot Nobiskrug build called Siren, which launched in 2008. More recently, it has become popular for yachts to have beach clubs—not just swim platforms—at the stern. For its new flagship, the 150, Wider has incorporated the fold-down balcony concept into the beach-club design and added a swimming pool.

When the Wider 150 is at anchor and its 32-foot tender is deployed, the swim platform drops back into place but the door to the tender garage remains open; platforms fold down from each side of the hull near the stern; and the tender garage is refilled and transformed into a 23-foot-long, open-air saltwater swimming pool surrounded by a spacious deck.

“In the last six to eight years, beach clubs have become in vogue,” says Jeremy Roche, Wider’s sales and marketing director. “Any yacht above about 30 meters has a beach club of some description. We’ve taken it to a whole new level with the sides that open and the transom opening up. It’s a far grander, more ambitious scale.”

The first Wider 150, Genesi, was launched in the fall and was still available for purchase when Robb Report went to press. For future Wider 150 orders, the boatyard will work with owners to personalize each hull. According to Wider, it will take about two years to build each yacht.

The idea behind the Wider 150’s design, Roche says, was to create spaces that do not exist on other similar-sized yachts. For example, on the foredeck at the coach roof, where most motor yachts include crew and working spaces, the Wider 150 features an open-air living area covered by an awning that rises hydraulically. “If the owner is in a marina and he’s docked stern-to and wants to have a private dinner, what’s the good of sitting on the aft deck with people all along the quay staring at you?” Roche asks. “The owner can use this private foredeck spot, and under way he can sit there under the awning looking out in peace.”

The Wider 150 has a modest top speed of 15 knots, but it can cruise at 11 knots for 4,200 nautical miles, enabling it to make transatlantic journeys. The two power rooms house a diesel-electric propulsion system, azimuth pods, and lithium polymer batteries. According to Roche, the yacht can run for at least eight hours in total silence on battery power alone. “When the captain drops the anchor and opens up the beach club, he turns off all the engines and runs on battery power,” Roche says. “You still have lights and TV and everything you want that used to run off a generator, but on this boat the only thing you can hear is the lapping of the water.

“The outdoor spaces as a whole are great,” he continues, “but the technical aspects are there to allow the owner to enjoy those spaces in total silence.”