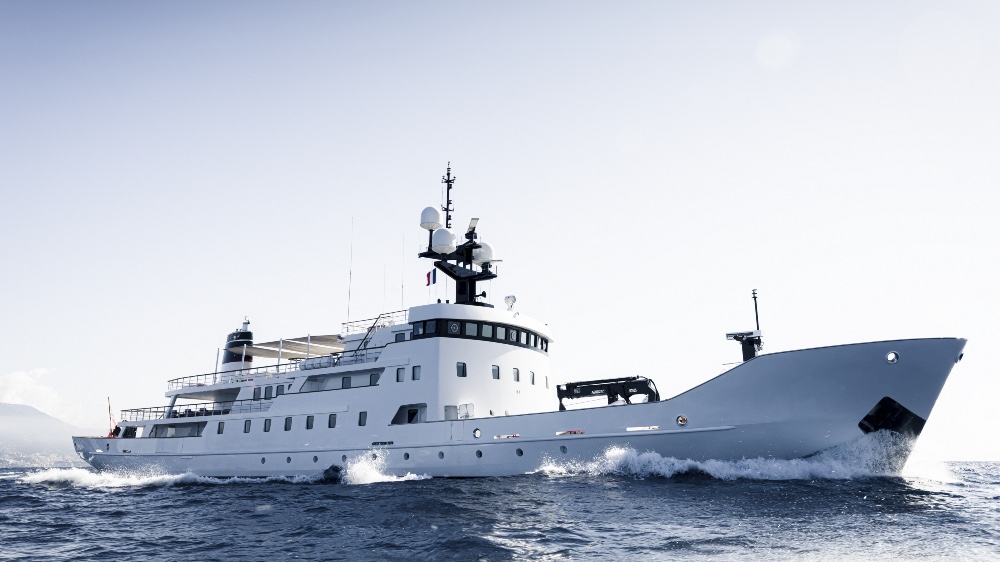 Here’s a nautical tale of how “The Spy Who Came in From the Cold” transitioned to a nice warm superyacht.

Cold War espionage is not often linked to superyachts, but a Russian spy boat is exactly how 226-foot Olivia started out in life. Commissioned by the Russian Navy in 1972, this rugged conversion yacht still sports the markings today where large sonars were once fitted, as part of her undercover search for foreign submarines.

“She was a commercial boat built in Finland, and then used as a survey ship for the Russian military operating for months at a time in high latitudes ‘allegedly’ surveying the seabed, but in actual fact she was a spy ship,” Burgess broker Tim Vickers told Robb Report during an exclusive virtual tour.

Built to the highest ice-class rating, with a 15,000-mile range and designed to “endure long stints in the toughest conditions,” Olivia’s offshore platform epitomizes the “go-anywhere” agenda now popular with many yacht owners.

A significant four-year conversion commenced in 2008, where the yacht began the slow but thorough transformation from military vessel to luxury boat at two shipyards. Rouvia Road Yacht Design & Construction in the Philippines did the beautiful rosewood interior and the yacht then moved to the Finnish shipyard Oy Laivateollisuus for completion. In 2010, her current owner bought her, converted the original ship’s office into a fifth guest cabin, and elevated Olivia to the prestige superyacht that she is today.

“Not your conventional superyacht guy, the owner comes from a shipping background. He likes a proper ship and Olivia really is a proper seaman’s ship,” says Vickers. “That said, he loves his creature comforts, and this is a family-friendly boat that has a good balance of functional features and the beauty of a very wood-paneled, shooting-cabin kind of interior.”

The interior is dominated by Rosewood joinery, with flashes of color from the owner’s art collection.  Burgess Yachts

This world traveler has been put through her paces over the last decade and has enjoyed a “pretty exhaustive cruising program,” notes Vickers. She has travelled around Southeast Asia, the Caribbean and was even one of the first yachts to enter Cuba when the yachting restrictions relaxed in 2017.

The captain, who has been with the family for over 30 years, enjoys a standalone cabin on the Jacuzzi deck. The state-of-the-art bridge was upgraded during the refit.

The industrial exterior sits in stark contrast to the minimalist Scandi-style interior. Finished wall-to-wall in solid Rosewood, Vickers says this gives the boat an appealing, woody aroma. Only the owner’s prominent art collection breaks away from the neutral color palette.

The Monkey Island (top) was originally an observation deck, but has been turned into an outdoor lounge. The area still has the vessel’s original compass.  Burgess Yachts

The main deck master suite located amidships—the most comfortable place on board during rough ocean crossings—is small compared to other yachts of similar lengths, but the owner’s ample bathroom, with its deep oval bathtub, sweetens the deal.

The main deck lounge with a projector and pop-up cinema screen allow for a spontaneous movie night, while on the upper deck is a dedicated cinema room. A 12-person whirlpool on the Jacuzzi deck, along with ample sun pads for relaxation, round off Olivia’s rough exterior edges.

The yacht’s explorer credentials are further ratified by a large crane on the foredeck. The owner’s limousine tender and 33-foot Zodiac occupy the available space at present, but Vickers says the crane allows for even heavier-duty tenders or even a submersible. With a second smaller crane on the upper aft deck and accommodation for up to 36 crew, the opportunity for serious expert-led expeditions is substantial.

The crane is one of the former Soviet ship’s standout features, able to lift large tenders and other big toys from the foredeck.  Burgess Yachts

Alongside the original hull and the immaculately maintained, polished chrome engines is the yacht’s quirkiest original feature: the monkey island. More commonly known as a flybridge on a superyacht, “monkey island” is the naval term for a place on the ship that is located at the top-most accessible height, typically a deck located directly above the bridge. Still fitted with its original compass, this cool, mini-observation area now features seating and gym equipment for the ultimate fitness experience.

Olivia is for sale through Burgess Yachts for $27.2 million. Check out some other views.