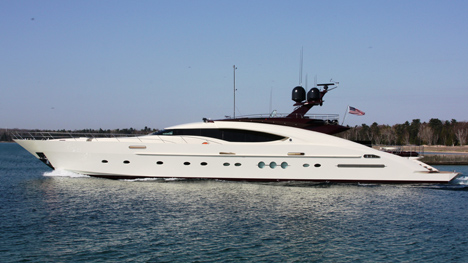 Palmer Johnson, once the most traditional of yacht builders, bet its future on the sport yacht design in 2002. Its market moved from American owners, many of whom preferred the stacked-wedding-cake design of tri-deck motoryachts, to an international base of clients. Seven years and 17 sleek, distinctive sport yachts later, the marque has become an icon among superyacht aficionados who like the colorful superstructures and stealth hulls.

The styling of the original 120 Sport Yacht migrated across the line to its flagship 150. Its most recent launch, hull number four of the 135 Sport Yacht, shares the same DNA, though it, too, has evolved from its first three sister ships (all silver, black, and red) to a more demure cream-colored hull with black mist domes and merlot accents.

Palmer Johnson employed a similar sense of subtle refinement with the interior, using light-walnut cabinetry, white-oak bulkheads with the patina of driftwood, leather accents, and Rubelli fabrics, creating an atmosphere that is relaxed yet sophisticated. The owner’s stateroom has twin en suite bathrooms, a large lounge and dressing area, and four other staterooms, each en suite, offer space for 12 guests. There are also crew quarters for eight.

The exterior makes good use of the sport-yacht concept by offering quick access to the sea, with its jet skis in a forward garage and another in the rear tender garage. It has the most private upper sundeck in its class, allowing guests to relax in the Jacuzzi and on large sun pads. Completing the sports package, the PJ 135 reaches a top speed of 30 knots. (920.746.6342, www.palmerjohnson.com)