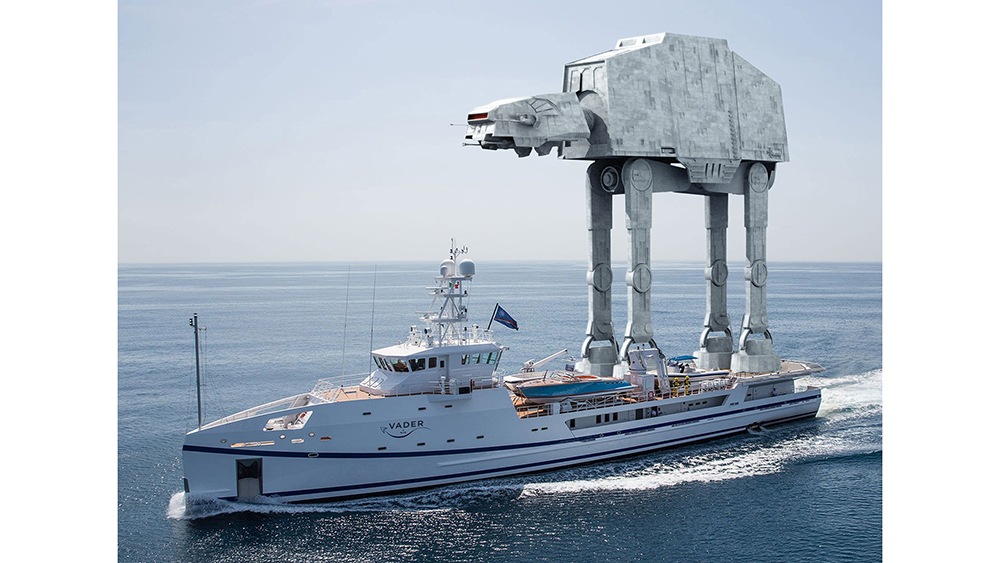 Maybe they should call it Starboard Wars.

What started out as “a bit of fun,” according to creative director Rob Armstrong, has become an annual tradition for the yacht designers at Thirtyc. Every year, the UK-based firm puts out a Star Wars-themed yacht, with characters or spacecraft from the franchise on board different superyachts. This week, in celebration of the unofficial Star Wars Day (May the 4th Be With You), Thirtyc released its latest series using yacht tenders driven by Star Wars characters.

“We did our first one when we opened the studio in 2015,” Armstrong told Robb Report. “We felt like we were injecting a bit of fun into our industry. Most of us knew Star Wars while growing up, so it seemed like a good way to add some light humor to what can sometimes become very serious superyacht projects.”

Seeing a storm trooper and Darth Vader on a million-dollar tender isn’t an everyday occurrence. Neither is catching a glimpse of Princess Leia or Chewbacca driving away on another tender. 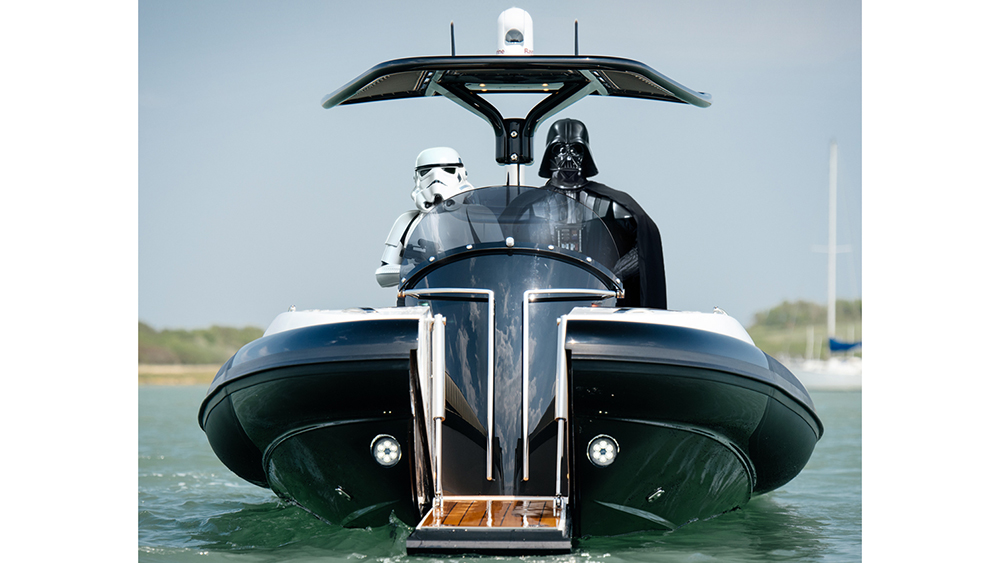 The Star Wars tribute, with Starfighters and other spacecraft aboard superyachts, has proven so popular that Thirtyc has expanded to smaller tenders.  Thirtyc Studio

At first, the firm received a lot of compliments about their whimsical but highly realistic work. “As it spoke to peoples’ imaginations, they started asking us to use their boats,” says Armstrong. Soon, Star Wars vehicles like AT-AT Walkers and Starfighters appeared on superyacht helipads and rear decks.

Recent superyachts transporting either Galactic Empire or Rebel vehicles included SilverFast, Eclipse, and many of the Damen support vessels, says Armstrong, who credits “great” marine photographers for providing the images. The team at ThirtyC also agonizes over the images to make them as realistic as possible, monitoring the way light falls from the yachts as well as figures standing on the smaller yacht tenders. 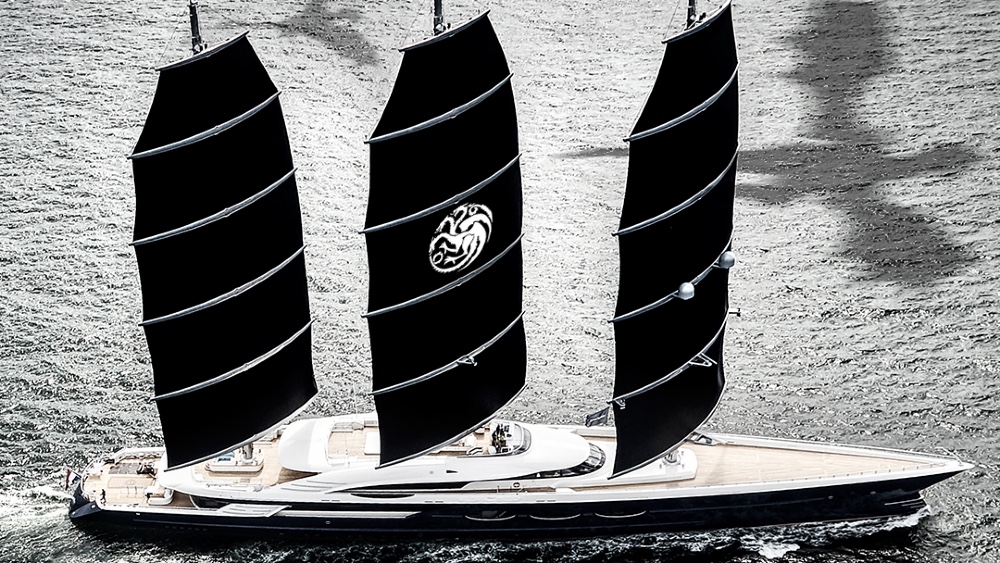 The UK designers have also included some Game of Thrones motifs on other superyachts.  Thirtyc

“We create image composites with the Star Wars theme, placing props and vehicles within the images,” says Armstrong. “Some of the characters were 3-D-modeled and placed to match the image. We want the shadows to look right on the boats.”

Armstrong says the annual exercise is a morale-builder for the team, and shows the yachting industry how creative the Thirtyc team can be. “The goal is to make people look twice so they don’t know if it’s real or not,” he says. 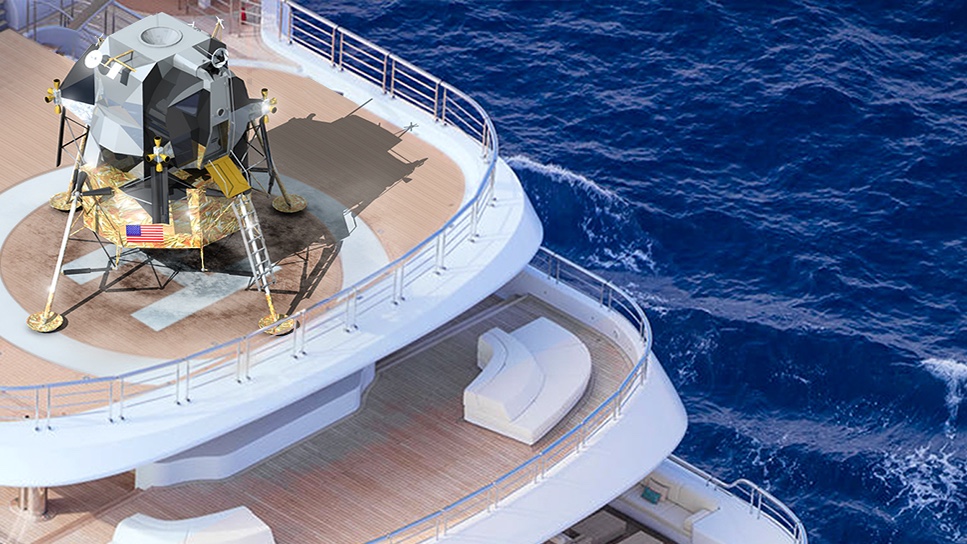 The Apollo lunar module on the helideck of the expedition yacht Luna.  Thirtyc

The Star Wars exercise has become so popular that Thirtyc has expanded its portfolio to Game of Thrones, Ghostbusters, Back to the Future, and last year’s anniversary of the first lunar landing. The Apollo space capsule was set, appropriately, on the helipad of the 377-ft. expedition yacht, Luna.

Armstrong says the team is already discussing what next year’s Star Wars theme will be. “Each year’s a challenge to think up a new angle for our audience and friends,” he says. “We’ll be brainstorming, but all ideas are welcome.” 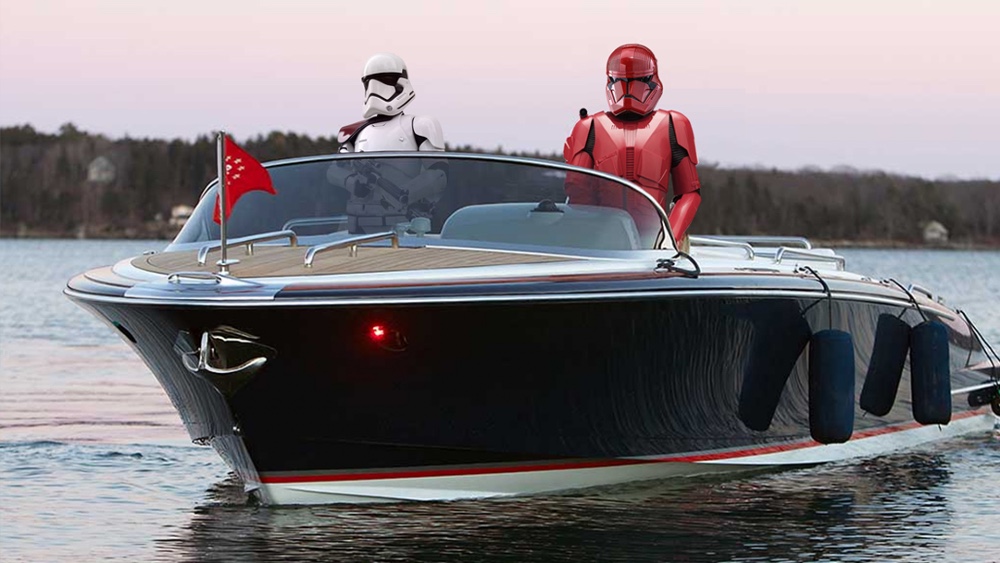 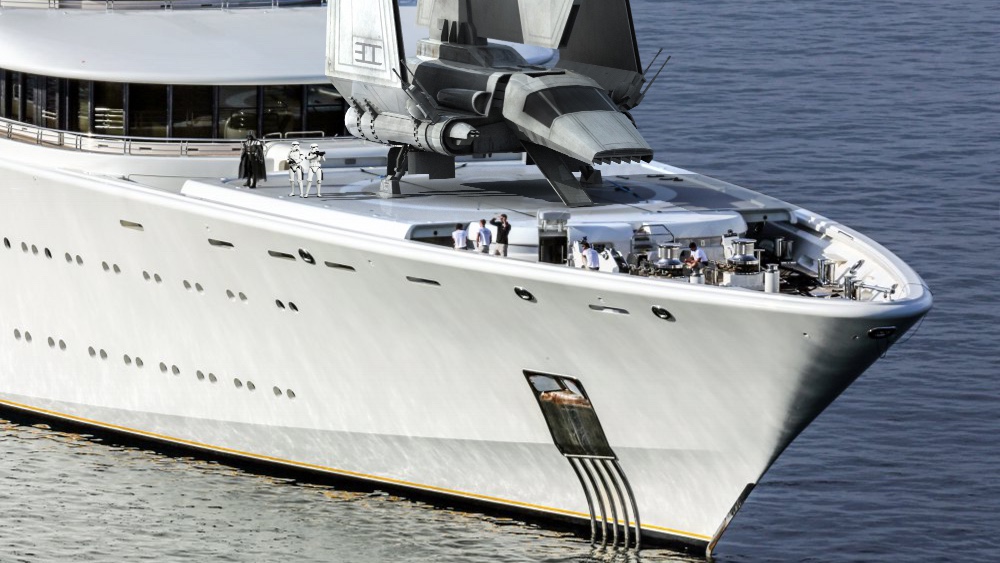 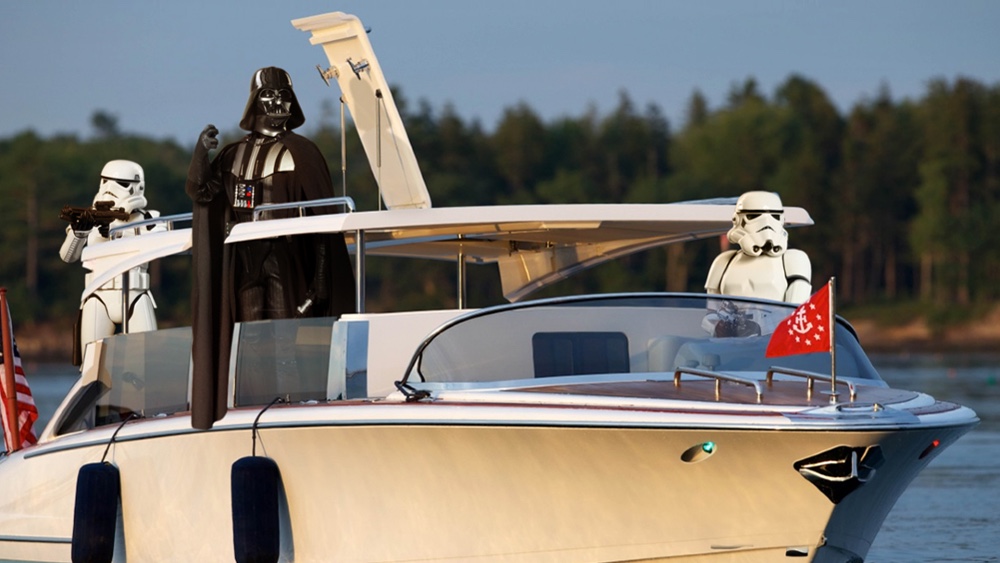 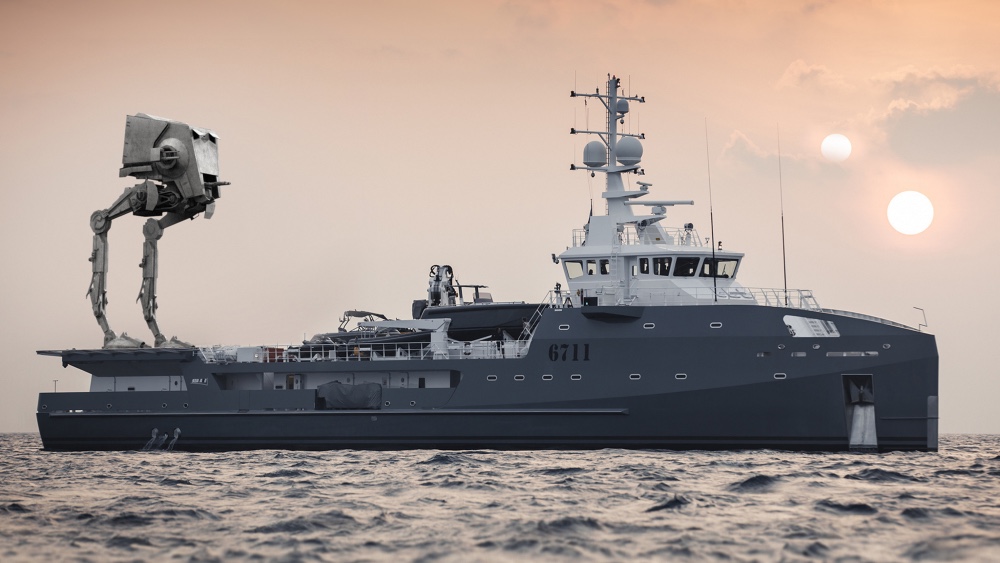 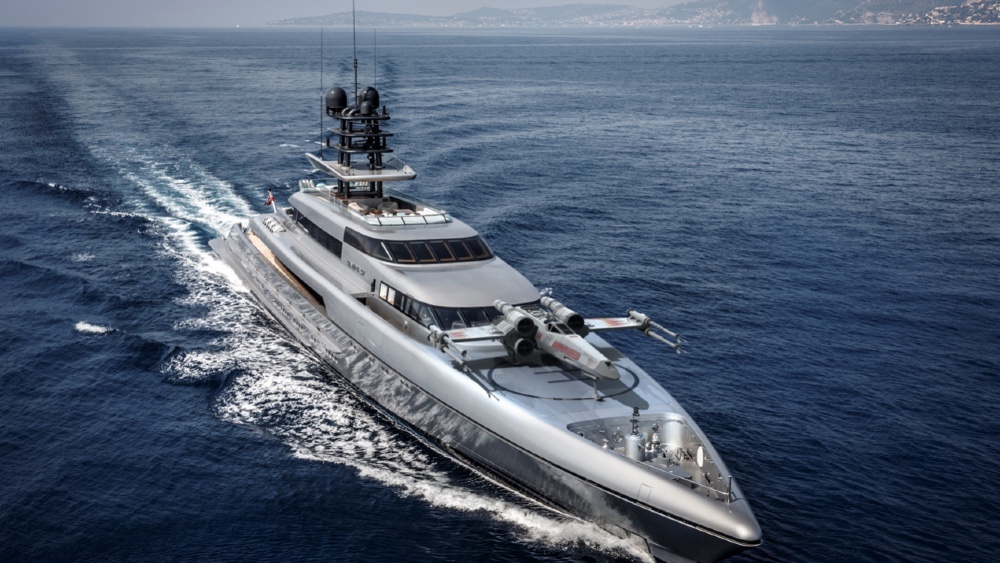 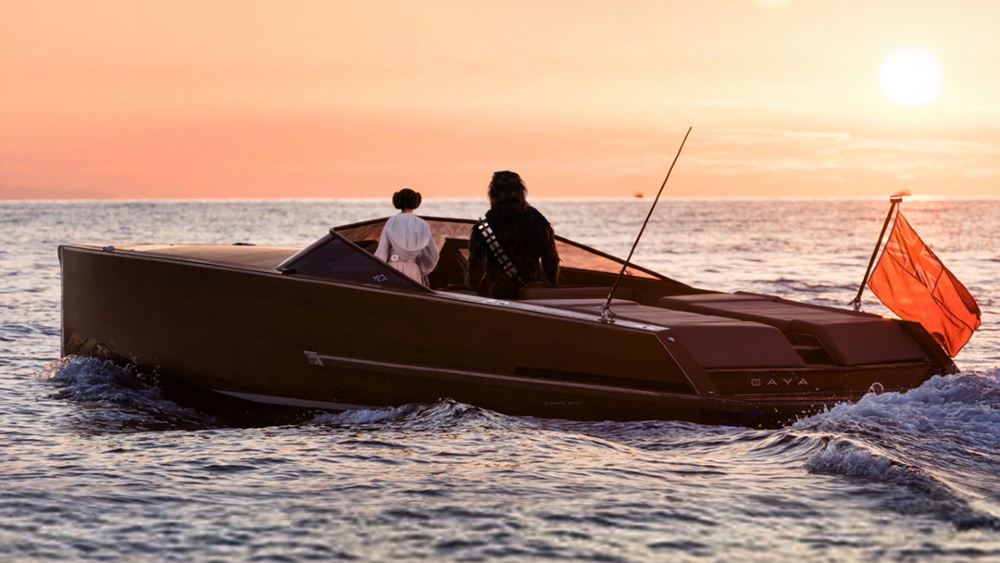