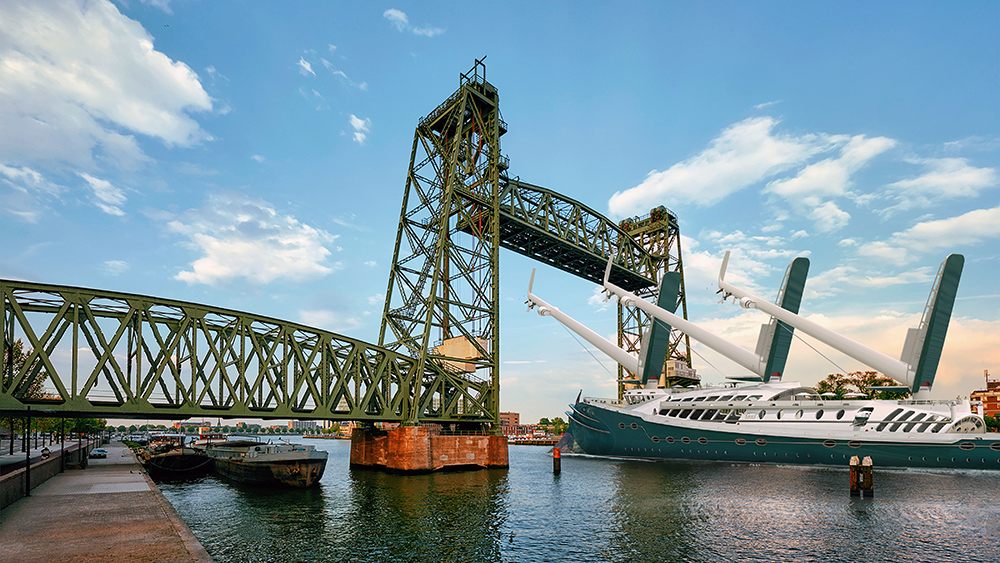 The mast is a crucial part of any sailboat, but Steve Kozloff wants to make it the crowning glory.

The California-based designer has just unveiled a sailing gigayacht concept, known as Glory, which is equipped with three innovative masts that can be rotated and lowered on demand. The new 558-footer is the latest model in Kozloff’s Goliath Series of “folding” yachts, which also includes the ice-class explorer Elegante that was revealed last December.

Glory’s new Solid Sail system, which was designed by French outfit Chantiers de L’Atlantique, has many advantages over a traditional rig, according to Kozloff. The trio of free-standing masts can tilt 70 degrees forward to reduce the air draft from 237 feet to 134 feet and enable the vessel to sail under most bridges. Each mast can also rotate a full 360 degrees to maximize wind power.

What’s more, the next-gen setup, which is free of yards and shrouds, has integrated load-sensing technology that tells the captain how much to drive the sailing rig. Plus, the sails can be automatically set or dropped in a snap.

Sporting a sleek, ice-class steel hull and aluminum superstructure, Glory is designed for global voyages. She’s fitted with a 6,000 hp hybrid diesel-electric propulsion system that gives her an estimated top speed of 17 knots and a range of 6,709 nautical miles when traveling at a cruising speed of 14 knots. When running under the 30,000 square feet of sails, meanwhile, Glory can reportedly hit 12 knots. Of course, the motors and sails can also work simultaneously for greater range and speed.

Inside, the piano bar is finished in luxe Italian marble.  Steve Kozloff

Onboard, the five-decker offers accommodation for up to 26 guests and 40 crew. The pick of the cabins is the massive owner’s suite that covers some 1,500 square feet. Another highlight is the glitzy grand piano bar on the upper deck, which is replete with TB Marmi’s exquisite Italian marble.

Outside, Glory comes equipped with a giant 2,028-square-foot aircraft hangar and a gyro-stabilized landing pad that can collectively house up to two helicopters or three eVTOLs. In addition, the full-beam garage can store four tenders, two Nemo U-Boat Worx subs and other water toys, while the two large cranes assist with loading and off-loading vessels and equipment. To top it off, the yacht features a large swimming pool on the upper deck and a full-beam beach club with retractable decks to the aft.

Perhaps the masts aren’t the only glorious feature within this 558-footer.