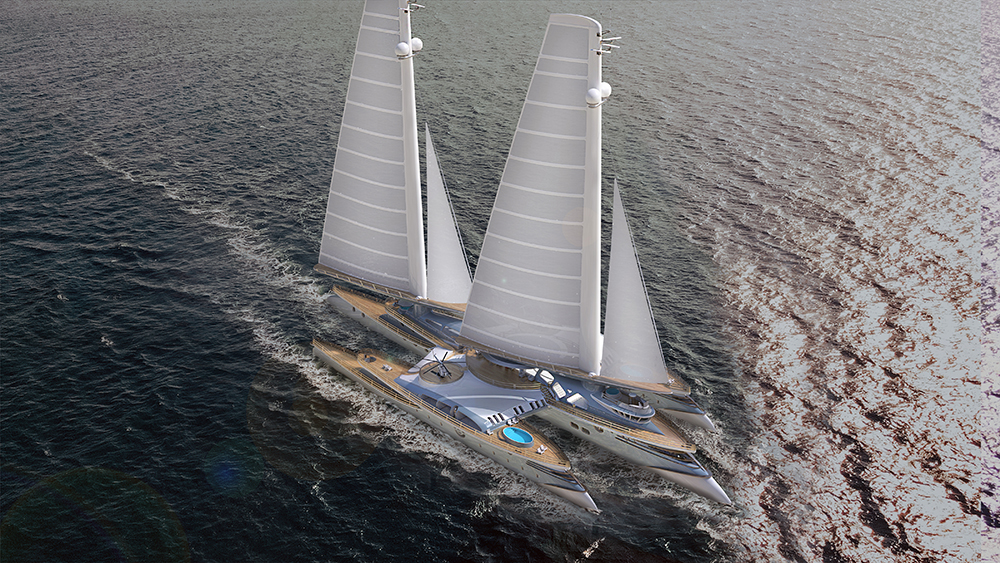 Steve Kozloff’s new trimaran concept is many things. Understated is not one of them.

The 328-footer, christened Trident, cuts a striking silhouette similar to the top of Poseidon’s famous three-pronged spear, along with a gleaming steel hull and aluminum superstructure that’s certain to stand out on the high seas. On top of that, her six decks are overflowing with options for your leisure or fun.

Starting inside, Trident’s multi-level living quarters span more than 5,100 square feet and feature huge windows throughout for panoramic views. The large piano bar and saloon on the upper deck act as the hub of the vessel, from which a network of walkways will lead you to other sections.

The trimaran’s two folding masts allow it to sail under bridges.

The 682-square-foot owner’s suite sits in the bow of the center hull, while the VIP suites can be found in the respective bows of the two smaller hulls. There are another 10 guest cabins spread across the outriggers, along with accommodation for up to 20 crew.

Outside, meanwhile, there is a full-beam beach club at the stern of the main hull with retractable decks for even more space. Elsewhere, there are two spas in the mail hull—one forward; the other aft—as well as a helipad and a pool on each ama, because double the amenities means double the fun.

There is, of course, a full-beam garage that can hold, you guessed it, two tenders, along with U-Boat Worx’s Nemo submarine and other water toys. Naturally, the vessel is equipped with a crane system that can assist with loading and off-loading gear. There are also six self-inflating lifeboats located underneath the main deck.

The full-beam garage holds two tenders and a submarine.

Trident is the latest model in Kozloff’s Goliath Series of “folding” sailing yachts, which also includes the models Elegante, Glory and Galleon. Like her predecessors, Trident sports a Solid Sail system designed by French outfit Chantiers de L’Atlantique. Kozloff claims this setup has many advantages over a traditional rig. Most notably, the two free-standing masts can tilt 70 degrees forward to reduce the air draft from 238 feet to 138.5 feet and enable the vessel to pass under most bridges.

Each mast can also rotate a full 360 degrees to maximize wind power. Speaking of which, Trident can hit 12 knots under sail power. She is also fitted with a hybrid (diesel-electric) system that enables a top speed of 17 knots. She can cover 6,700 nautical miles when cruising at 14 knots on diesel alone.