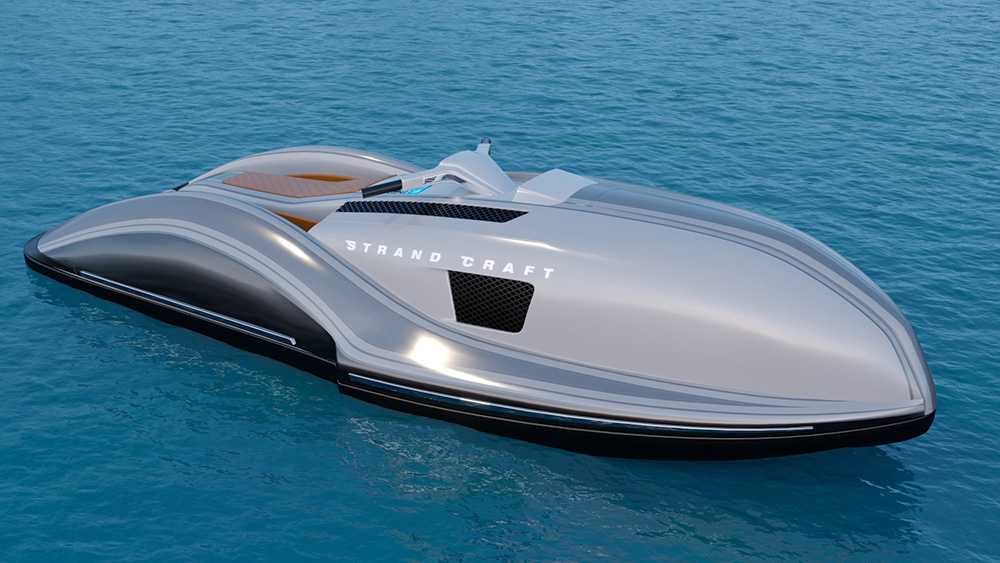 Allow us to introduce you to the new Strand Craft V-8 Daytona GT. More than five years in the making, the menacing jet ski “marries power and speed” for unbridled thrills. Think of it as the Shelby Daytona of the high seas. While details are decidedly scant, there are a few specs to get seafarers excited.

Although it has the sleek silhouette of a sports coupé, the Daytona is nothing short of imposing. The hulking craft, which will likely be built from fiberglass or aluminum, spans nearly 17 feet long by 5 feet wide and weighs 1,250 pounds. This makes it quite a bit bigger and heavier than the average jet ski.

It’s more powerful, too. Just like an American muscle car, the Daytona packs a punishing V-8. The 6.2-liter aluminum engine will be supercharged for added grunt, though Strand Craft hasn’t specified a top speed. Suffice it to say, this thing is sure to slice through the waves.

The cabin is fitted with a large 15-inch touch screen that displays all the engine functions. It’s also equipped with a premium sound system that can blast the requisite cruising tunes and a cooler box under the seat where you can store refreshments. Elsewhere, there’s a storage box forward that can hold extra gear.

With luxury being a central tenet of the design, Strand Craft has listed a myriad of fancy optional features. Customers can opt for a carbon fiber body, wood inlays, a custom trailer, or bespoke wrapping, to name but a few. You can even add an underwater camera or shock-absorbing seats if you so desire.

“Beautiful, powerful and luxurious. These three adjectives inspired my design for a new watercraft concept,” Strand writes on the website. “I wanted to create a model that marries power and speed to the grace and elegance of Strand Craft’s design heritage.”

The company hasn’t listed a price for the Daytona, but does boldly state “you dream it, we build it.” We hope to see some of these particular dreams hit the water soon.