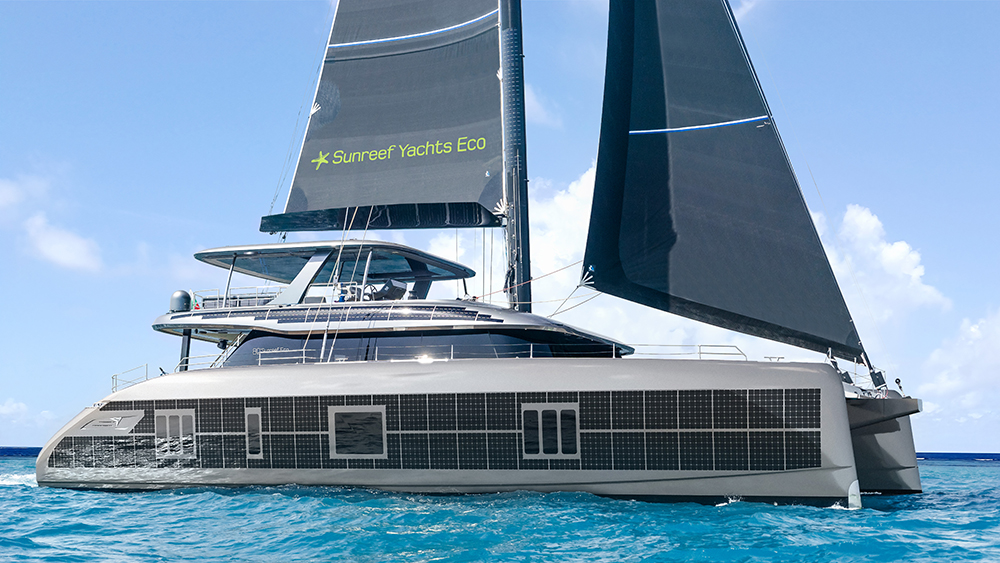 Sunreef Yachts has been at the forefront of eco-innovation in the marine world for the past two decades. It’s not exactly surprising, then, that the Polish yard announced another groundbreaking project at this year’s Monaco Yacht Show.

Sunreef’s founder and president Francis Lapp took the stage to share that the team was recently commissioned to build an 80-foot sailing catamaran that will combine hydrogen power and electric propulsion to achieve “unrivaled autonomy for a new level of eco-conscious cruising.”

According to Lapp, hydrogen will be used to power both the cat’s appliances and electric motors. The 80-footer will also feature Sunreef’s patented photovoltaic system—sometimes referred to as a “solar skin”— which will see the world’s lightest solar cells fully integrated into the composite bodywork. This allows the cat to generate clean, green energy from the sun and then store it in the built-in batteries. Sunreef’s R&D department is currently developing a system that will use this solar power to produce hydrogen onboard. That means you could eventually sail the high seas silently and sans emissions while generating your own fuel. Not bad.

Sunreef didn’t go into any further specifics regarding “the system.” It is worthwhile pointing out, though, that four of the biggest yacht builders (Lürssen, Baglietto, Headship and Baglietto) are outfitting new builds with fuel cells that turn hydrogen into electricity to power the engines. Sunreef’s setup may be drastically different (or not), but at least there are also some industry powerhouses pioneering this revolutionary green tech.

During the show, Lapp also confirmed the yard had secured a build contract for a Sunreef 43M Eco aka the world’s biggest electric leisure catamaran. Two electric Sunreef 80 Ecos, known as Marie-Joseph and Kokomo, were also showcased in Monaco for the very first time.