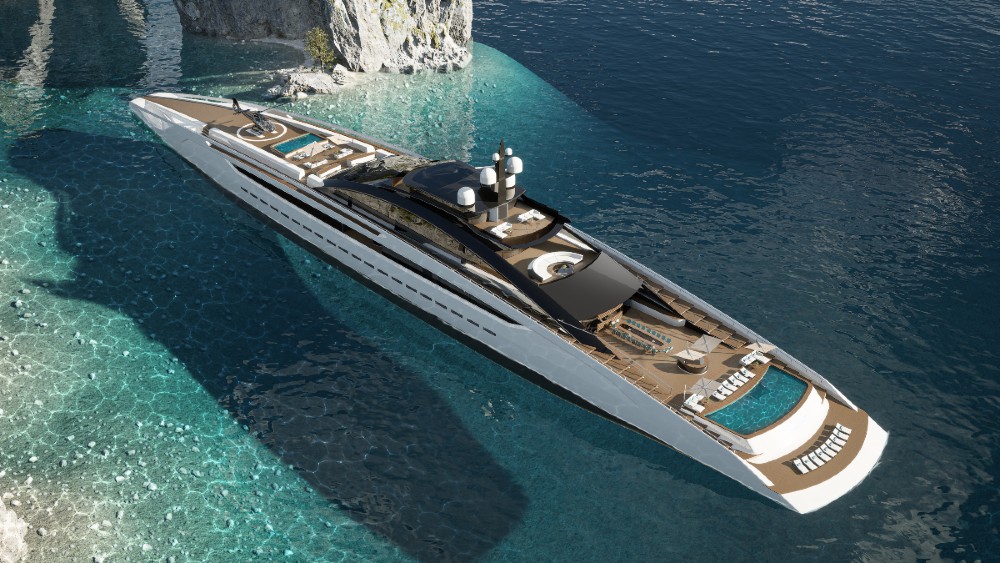 Designing a 443-foot day boat sounds like an exercise in madness, or perhaps futility, if the designer ever hopes to find a buyer. But Italian designer Roberto Curto is used to breaking through established norms, even if what lies on the other side is more fantasy than working vessel.

The Genoa studio’s newest project, Sunrise, might seem like one of those impossible dreams, if it didn’t look so damned beautiful. The boat stretches from stern to bow in a gentle arc that emphasizes four football fields’ worth of exterior space, with a large but organic-looking superstructure that hugs the water, rather than jutting upwards across multiple decks towards the sky.

“The idea was to have a big yacht that doesn’t look like a traditional wedding cake,” says Jim Evans, managing director of SuperYachtsMonaco, the agency tasked with finding a buyer for Sunrise. “Because it’s missing all those layers, it doesn’t have a huge amount of interior volume or weight. It’ll have the more traditional uses of an open day boat.”

An open design and 66-foot beam allowed the designer to create mega-pools and other supersized exterior spaces across Sunrise.  Courtesy Roberto Curto Design

“I wanted to bring the sport life to gigayachts,” adds Curto. “At the moment, there is nothing this radical.”

The concept is more than a set of drawings displaying a beautiful boat. Curto designed a wave-piercing hull for the bow that actually slides under waves when confronted with big seas, providing stability and speed in rough conditions. “It’s similar to the hulls on some submarines and military vessels,” says Curto. “I have a 34-foot boat that I designed with the same hull and it works fine, so I expect it will work on this larger scale.”

The submerged bow seems like it would actually perform in real-world conditions, thanks to the long, open forefoot on the forward end.

In the images, Sunrise is certainly an open design, but there are no people to show how vast—giga-sized—the spaces really are. The swim platform, for instance, is about 36 feet deep and, thanks to the 66-foot beam, the aft swimming pool is a good 50 feet wide. An outdoor dining table seats 22. On the bow are another large pool, helipad, and even a jet-ski docking area. To get a sense of scale, running four laps along Sunshine’s edges would equal a mile.

The reason why the concept works is that Curto didn’t try to fill the space with dozens of small rooms across five or six decks. Some gigas feel like a maze in a massive hull. Curto, instead, kept the spaces simple, open and zen-like across the yacht.

A massive, atrium-like entrance to the interior, defined by huge glass panels, is connected to the long bow. The main salon has a sculpture shaped like a giant drop of rain splattering on the floor, with open circular panels extending through the decks above, as if it had just fallen from the sky. Round white concentric circles designed into the floor show the drop’s splatter pattern. A few lounges and tables are placed within, but otherwise the space is vast and empty.

The main salon is vast and zen-like, with a giant raindrop sculpture in its center. A hole in the decks above the drop is part of the yacht’s artistic design.  Courtesy Roberto Curto Design

On the upper deck is an observation lounge which, apart from the pilothouse, another exterior lounge area, gym, dining area and the staterooms, is pretty much the complete layout. The owner’s suite, like the main salon, is immense, with its own gym and outdoor patio. The tender garage in the lower deck is also enormous, with space for multiple boats and water toys.

The hull design gives Sunrise a top end of 24 knots; Curto is working with an engine builder to create a hybrid electric-diesel propulsion system using azipods at the stern for speed and efficiency gains.

In the end, however, the main impression is the yacht’s elegant, open design, with the subtle curves. “One thing we’ve noticed in the last five years is the growing demand for extra-luxurious exterior spaces,” says Evans. “The exterior needs to be just as exclusive as the interior.”

Evans would like to see scaled-down versions of the yacht, perhaps 250 or 300 feet, that would have a larger potential pool of buyers. Still, he’s very happy with the design. “If I’d challenged other yacht designers in the beauty parade with a concept like this, they’d come back with something quite conventional, akin to a small cruise ship,” he says. “A lot of clients will be attracted to a design like Sunrise. They’ll really like the sporty lines and the fact that it still looks like a private yacht, despite the giga size.”

For Curto, buyer or not, Sunrise remains an exercise in creativity. “It’s really there to push the limits, to let clients see we can create something different,” he says. “We see it as innovation on the water.”