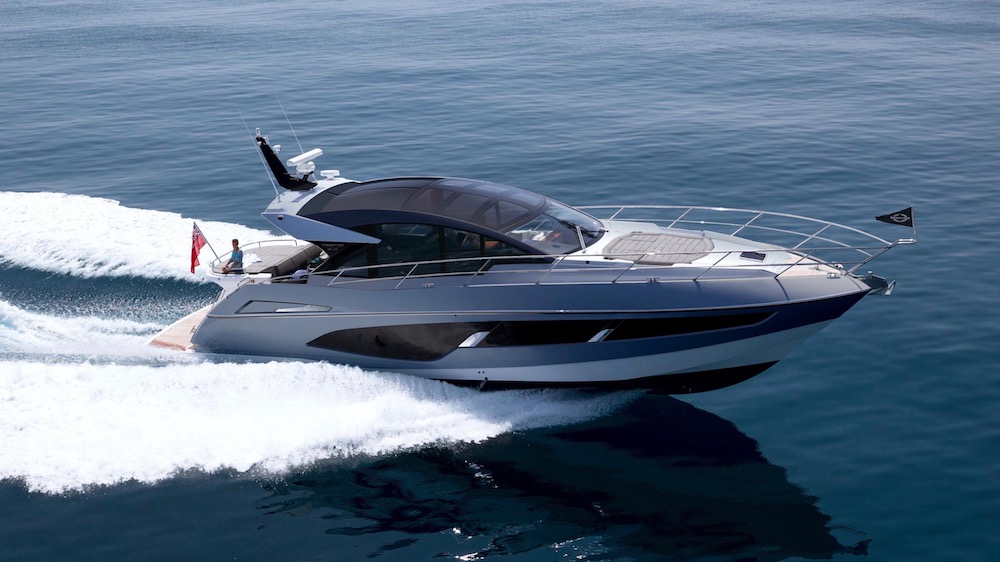 Sunseeker is set to debut its latest yacht, the Predator 60 EVO, at September’s Southampton International Boat Show. This new 60-foot Predator model from the UK-based shipyard will make its world premiere September 13 to 22 and is the first model of Sunseeker’s new product-development plan meant to change things up.

The superstructure’s all-new window line and powered carbon-fiber hardtop with huge window panels are part of the company’s new look. All the windows, of course, illuminate the interiors with natural light—always a plus. The hull remains the same Sunseeker style, but is bedazzled with polished stainless-steel details. Also new is the option of choosing one of several already selected custom paint packages.

Windows and paint jobs aside, a super cool feature on this new yacht is the cockpit door, which opens to ways: either the usual open/shut way or, once open, lowering it into the sole of the yacht. This fully opens up and blurs the line between the outdoor and indoor spaces.

Cockpit lounge with the door open and tucked into the sole.  Photo: Courtesy of Sunseeker

Aiming for bold, the Predator 60 EVO was created with a whole new interior design, from the furniture, textures and materials, to the decoration—Sunseeker went sporty modern.

This light and bright ambience can be seen throughout the yacht, both in the common spaces and the staterooms, of which there are three belowdecks. Taking over the full 15-foot beam is the amidships master stateroom.

Also on the lower deck are a single-berth crew cabin and the tender garage built to fit a Williams Jet Tenders TurboJet 325 RIB, which is launched by the hydraulic swim platform. All told, the yacht accommodates a total of six guests and one crew member.

With all the windows and sunlight streaming in, you may not want to bother with sunning. However, if you do want to work on your tan and soak up some vitamin D, the Predator 60 EVO offers up several sunning locations: As seen above, the aft deck has sunpads just behind the seating area and above the swim platform. As seen below, the swim platform is large enough to sprawl out and sun a bit, and the foredeck also has sunpads ready for you.

The stunning, light-filled and ergonomically designed helm console sports the latest Simrad touchscreen display with a simplified and intuitive user interface that integrates control of all essential systems. This is part of a wider technology push that Sunseeker is rolling out across all its new models.

Sunseeker is offering the Predator 60 EVO with a variety of engine and drive-system options, including the new Volvo Penta D13-1000 engines on shafts capable of speeds of up to 34 knots.