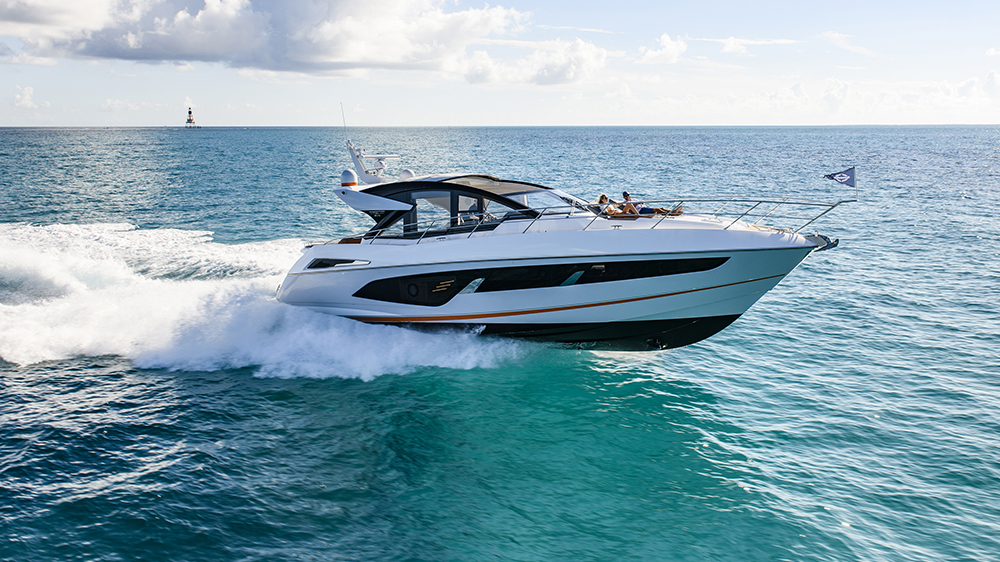 Sunseeker is a British brand that has evolved over the last 51 years, thanks to the spunk and creativity of its founders, John and Robert Braithwaite. Instead of adopting the buttoned-down designs of a few other UK builders, the Braithwaite brothers’ boats factored in a joie de vivre that made their yachts quite at home in Cannes or Sardinia.

The yacht builder has moved on with a new CEO, Andrea Frabetti, who spent 25 years of his career designing yachts for Sunseeker’s primary competitor, Riva, and other brands in the Italian Ferretti Group. He became the protégé of Norberto Ferretti, long considered a pioneer of innovative designs. By the time Frabetti left, he had designed more than 300 yachts and a pioneered often-wild innovations like flooding transoms, through-hull windows and stabilizers.

“More than any other brand, Italian or not, we saw Sunseeker as the most innovative among our competitors,” says Frabetti. “We had a lot of respect for them, and there was a lot of back and forth over the years as we fought it out with new designs. I can’t recall how many times we discussed what they were doing and how they would respond. They also never made a boring boat—by boring, I mean something that was just built to be sold, rather than redefining the design rules of the industry.”

The fact that Frabetti, who constantly jokes about the gloomy English weather in Sunseeker’s hometown of Poole, would someday be leading his former competitor seemed inconceivable even two years ago. In just under a year, however, he has injected Italian flair into the British brand while also respecting its DNA, which includes a performance heritage and straight lines.

The Predator 60 Evo is the first Sunseeker launched with Frabetti’s design imprint. The long, slender profile, with an extended in-hull window and curved superstructure (punctuated by the small, swept-back radar arch) maintains the family resemblance of the Predator’s coupe design. Frabetti, however, added other cues on the interior, including red piping on the off-white furniture of the salon, stainless insets in the walls to reflect the builder’s penchant for luxurious flourishes.

I ran the 60 Evo for a few hours on South Florida’s Intracoastal Waterway, heading out into the Atlantic into four- to five-foot seas. The yacht reaches a top end of 34 knots, reasonably fast, but the best feature is the Hydro-Pack hull design, which increases water flow through the props for a smoother, more efficient ride. Just off the Florida coast, the Sunseeker didn’t shoulder its way through seas but rode up and over without the hull vibrations typically found other boats. Considering the sea state, it was a smooth ride.

We were also protected in what felt like a giant bubble under a hardtop that is defined by large overhead glass panels. Sunseeker designed the carbon-fiber top with glass for protection in wind, but without sacrificing natural light. The 30-plus-gusts and whitecaps outside felt like watching a movie. The new Sunseeker also has new Simrad evo3 touchscreen displays that allow the driver to control onboard functions without having to locate buttons or switches. Ditto the monitoring of fuel, batteries, generator, engine status, and other systems. The Simrad screens also integrate navigation like GPS, autopilot and radar so it’s essentially a one-stop shop for running the boat.

The Evo is also designed as a social platform, with a large cockpit window that descends into the floor, so the main deck becomes open space from the transom to the helm station. Sunseeker also put thought into the rear of the 60, including a garage that houses a Williams 345 Sportjet tender. The rear broad hydraulic swim platform is submersible, so owners can launch and retrieve the tender without having fight with it.

The foredeck has three oversized sunpads, adding to the social appeal, while the galley belowdecks has an open ceiling connecting to the main deck, contributing to the interior’s sense of space. Three staterooms have six berths and the head has a handsome marble finish.

Frabetti wanted the Predator Evo series (which includes a 55-footer) to appeal to a younger buyer, so the designers included artistic flourishes like three backlit stripes in the headboard of the master suite’s berth, and carbon-fiber handles and rails across the interior. The yacht’s fit and finish is contemporary without being ornate.

The 60 Evo is a strong debut for Frabetti, who keeps in touch with the firm’s founder, John Braithwaite. The boat is also a good indication for where the brand is heading. “It’s a very exciting time for me,” says Frabetti. “I only abandoned Italy because Sunseekeer called me. If it was another brand, I never would’ve left.”