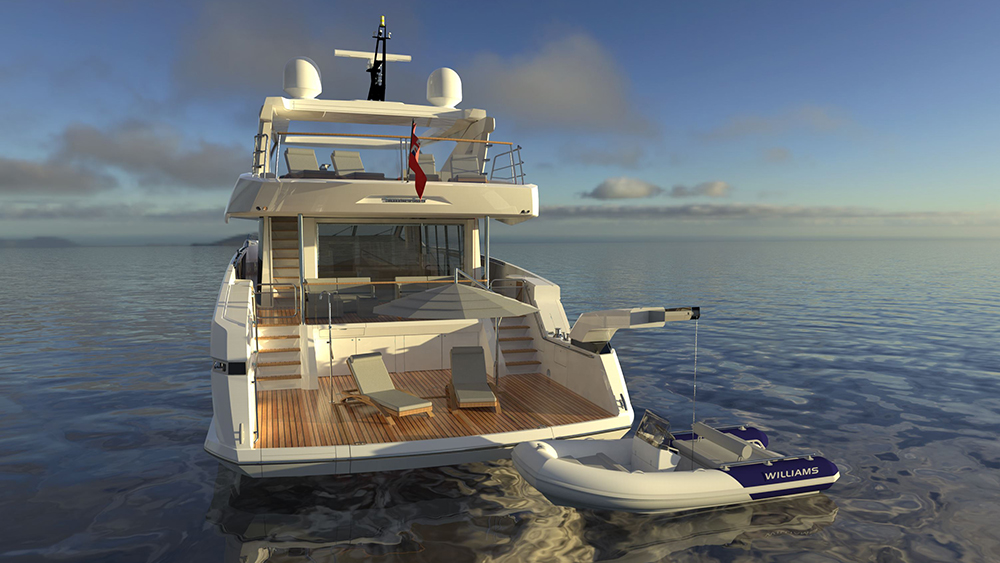 Sunseeker is entering a new era with its Project 8X. The British builder has been on a tear with the introduction of bold designs across its motor yacht range over the last four years, culminating with the announcement at the last Monaco Yacht Show that it was building its first-ever 161-foot aluminum superyacht in conjunction with Dutch builder Icon.

Project 8X, which it announced at the Düsseldorf boat show, represents a new chapter for Sunseeker. Taking cues from the brand’s superyacht line, the motor yacht will fall between 80 and 90 feet (Sunseeker will release more details later) and launch in the fall of 2020.

The renderings shown at its press conference at Boot Düsseldorf were enough to see it’s going to be a groundbreaking design. The profile is handsome but not overly aggressive, with less of a rake at the bow and plenty of windows built into the hull sides.

“Her exterior and interior are fundamentally very different from the current range,” says Sean Robertson, president of Sunseeker USA. “The design and engineering behind Project 8X epitomizes our next generation of larger models. While each new model is still quintessentially and unmistakably a Sunseeker, this exciting new yacht will, without doubt, reinvent the market when it launches next year.”

Its category-busting features include a large beach club at the transom, which is four times as big as most yachts in its category. The open area will have a hideaway crane for launching and retrieving the standard Williams tender and personal watercraft, an optional hydraulic swim platform, and foldout passerelle to move easily between boat and dock.

The idea, says Robertson, is to turn that transom area into a dedicated zone for entertaining. The cockpit, just steps up, has a barbecue, refrigerator, and wet bar for alfresco dining either in the cockpit or on loose furniture on the beach club.

Sunseeker also maximized the other exterior spaces, making the foredeck another social area with a sunbed, sofas, and tables, as well as an optional pop-up cinema that uses a 140-inch screen and laser projector. The flybridge also uses the space efficiently with a double helm area forward, full-beam lounge and sunbeds, wet bar, galley, and dining table. The rear deck, beyond the carbon-fiber hardtop, is open for sunning.

It’s clear the Sunseeker design team spent many long hours working out the most effective layouts of each area, realizing that Project 8X would be more than the sum of its parts. It would represent the future of Sunseeker’s larger yachts.

The main saloon, which measures 18 feet by 29 feet, has full-height windows, both at the cockpit and along the sides, to maximize the sense of space in the open-plan layout. The lower helm has an optional 14-foot skylight for extra light. Owners will have the choice of placing the eight-person dining area either port or starboard, while the contemporary, apartment-style galley is forward.

Project 8X will have modern decor with plenty of wood, including a wooden feature wall that leads into the full-beam master suite belowdecks. The designers made sure to keep in sync with the curves of the yacht, adding bends to the bulkheads and even a curved sofa. The master suite has his-and-her wardrobes along with full-length mirrors. The bathroom has twin porcelain sinks, backlit mirrors, and a freestanding Axor shower.

Sunseeker has designed a VIP stateroom into the bow area along with two twin aft cabins that can be converted to doubles. If the owner wants to charter the yacht, a fifth cabin can be added. A separate crew cabin has its own kitchenette, crew mess, and head.