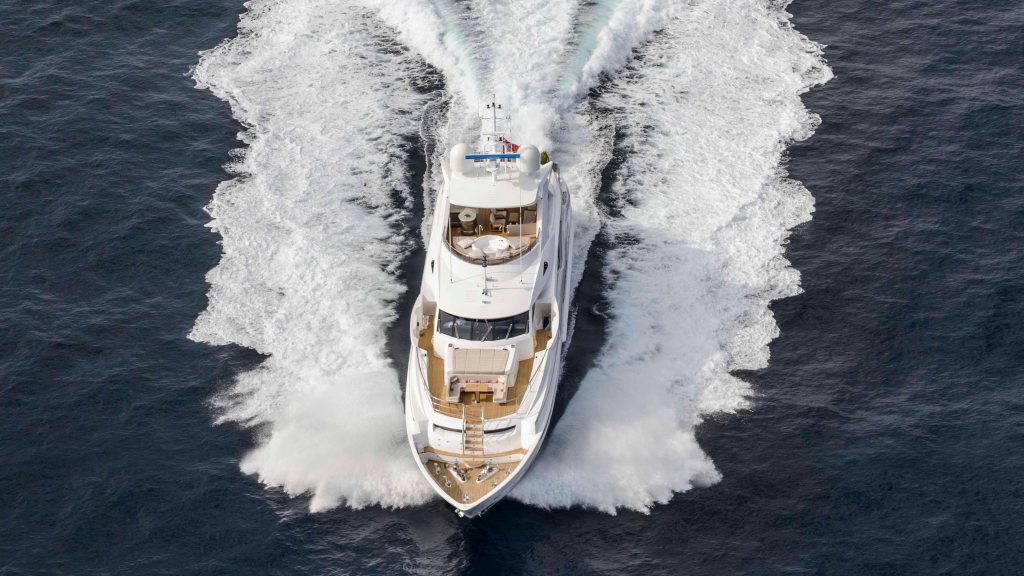 British yacht maker Sunseeker has had an extraordinary run over the past three years, launching a record number of new models across its different lines. All reflect the design prowess of the U.K.’s largest yacht-builder, but also demonstrate its versatility in catering to very different types of owners. At the Cannes Yachting Festival, eight models will be docked one after the next. They include one world premiere, three show debuts, and four recently launched models. All told, the new Sunseekers show exactly why James Bond’s favorite boat remains at the top of its game.

The Predator series is one of Sunseeker’s signature achievements. Aggressive, elegant, and fast, the Predator 57 and 68 have two of the most advanced cockpit designs in yachting. Defined by curves and nonstop glass, the overhead enclosures also have opening sunroofs covering a third of the space. This feature brings the outdoors in with the push of a button, but it also let Sunseeker turn the cockpit into a climate-controlled saloon.

Who says you can’t do a good thing better? The Predator 57 MK II, an evolution of the two-year-old 57, retains the giant sunroof, multiple social areas, three staterooms, and a captain’s cabin. The MK II’s sweeping side windows are now pillar-less, allowing for uninterrupted views of the ocean. Social possibilities aboard the MK II are covered in every type of weather: The cockpit buttons up nicely in rain or wind, but when the sun’s out, the patio door between the saloon and outer cockpit actually lowers into the sole, turning the deck into an entertainment area. The 57 MK II also has an optional mini-beach club, with an integrated barbecue, overhead shower, and fold-down seating. Belowdecks, the full-beam master suite and large, forward VIP stateroom are both feature en-suite bathrooms. The galley-down layout adjoins an L-shaped lounge and allows for more open space on the main deck.

Beyond its head-turning profile, the Predator 57 MKII reaches speeds up to 40 knots, depending on engine and drive choices. It’s a nimble boat, able to carve turns like much smaller sportboats.

Over the years, the Manhattan line has pushed flybridge design away from plodding, boxy boats into sleek, fast motor yachts. Sunseeker’s new 66 Manhattan fast-forwards yacht design a step further by maximizing volume, both inside and out, and bathing the interior in natural light through supersized windows on the upper deck and large through-hull windows in the staterooms. The flybridge size has also expanded, with sunning areas beside the helm station and aft along the overhang. The open-plan saloon, with the aft galley and high headroom, also feels larger than most 66-footers. (The galley can also be configured on the deck below for more entertainment area in the saloon.)

The galley-up design, however, let Sunseeker expand the four staterooms, which include two large twins, a forward VIP suite, and a full-beam master suite. The master stateroom has big picture windows on either side, with a sizable en-suite bathroom and closets. It also has a first for a Sunseeker this size: a private stairway that keeps the room secluded and homey. The new 66 also has an optional twin cabin for crew, with separate access through the transom.

Like the Predator 57 MK II, an optional beach club on the transom includes the barbecue, foldaway seating, and a pop-up rain-forest shower that is perfect for washing off the salt after a swim or snorkel. The swim platform is capable of holding a 13-foot Williams 385 Jet Tender. The bow area on the 66 is also worth pointing out, with a significantly larger table and loungers than most similar yachts. Upgrades like these make it clear why the 66 Manhattan has attracted 34 new owners since it was first launched in January. It could easily be one of Sunseeker’s most popular yachts ever.

The 66 Manhattan can be powered by Volvo or MAN diesels, with a potential top speed of 32 knots. At 10 knots, its range is 550 nautical miles.

The 68 Sport Yacht has a modern look, thanks to a curvy but angular superstructure that gives it a contemporary, almost edgy, profile. Add dozens of square feet of tinted glazing to the hardtop, and yet more windows along the hull side, and the 68-footer really has no peers in its class. Thanks to the shape of the superstructure, headroom is extremely generous in the saloon, while the windows provide a clear view to the sea. Sunseeker’s carpenters do exceptional work, so the craftsmanship in the saloon’s furniture and cabinets is outstanding. The same levels of fit and finish can be seen belowdecks, in the full-beam master suite, with its large en-suite bathroom, desk and lounge, and, surprisingly for a boat this size, a walk-in closet. The VIP suite in the bow has a queen-size bed and two hanging lockers, while the third stateroom has twin beds and its own en-suite bathroom. The crew quarters in the stern has twins for the captain and first mate.

Beyond the expansive interior, the 68’s social areas outside are also unusually large. A sunbed on the bow can accommodate a family of four rather than the usual couple, while the L-shaped lounge at the cockpit could provide seating for a party of 12. The cockpit doors slide open normally or, with the push of a button, lower into the floor to create an unbroken space between the saloon and cockpit. It’s that kind of advanced feature that demonstrates the forward thinking behind the 68.

Speaking of which, the swim platform also lowers into the water for launching and retrieving the Williams Jet Tender, or guests can also just have easier access to the water. Depending on engine choice, the 68 Sport Yacht can reach a top end of 38 knots, with a range of 300 nautical miles.

Sunseeker’s new 131 Yacht, which launched last year, has already seen its order book balloon with 10 orders. The beauty about this tri-deck Sunseeker is that no two will look alike. Sunseeker’s bespoke service not only customizes the interior design, but also the internal configurations. The standard layout is for 10 guests in five cabins, though the number of staterooms can be increased or decreased, according to the owner. Sunseeker can also add many, many nice touches like fabric or wood upgrades. The builder will even install “feature” glass panels near ceilings in the master suite, saloon, and upper saloon to augment natural light from those rooms’ already sizable picture windows.

Taking the place of the former Sunseeker 130, the 131’s designers made quality-of-life improvements like extending the sky deck and upper aft deck by 7 feet. That extra length allows for a larger, fully equipped bar and stools, and more ample seating. The sky deck also has lux extras like a Jacuzzi. The cockpit on the deck below features a dining table for 10 that adjoins the upper saloon. On the main deck, the open-plan saloon has a large social area with sofas and a formal dining table. The enclosed professional galley just forward of the dining area comprises about a quarter of the main deck, while the master suite toward the bow is even larger. The palatial master includes a large bedroom, separate desk and lounge areas, and a full-beam bathroom forward, with his-and-her sinks, shower, toilet/bidet, and even a bathtub.

The garage will accommodate a 20-foot tender, plus two jet skis. The new 131 can reach a top end of 25 knots, making it unusually fast for a superyacht, or cruise at 10 knots to provide a 1,500-mile range. The hull was designed to perform across its speed curve, providing a smooth, comfortable ride.