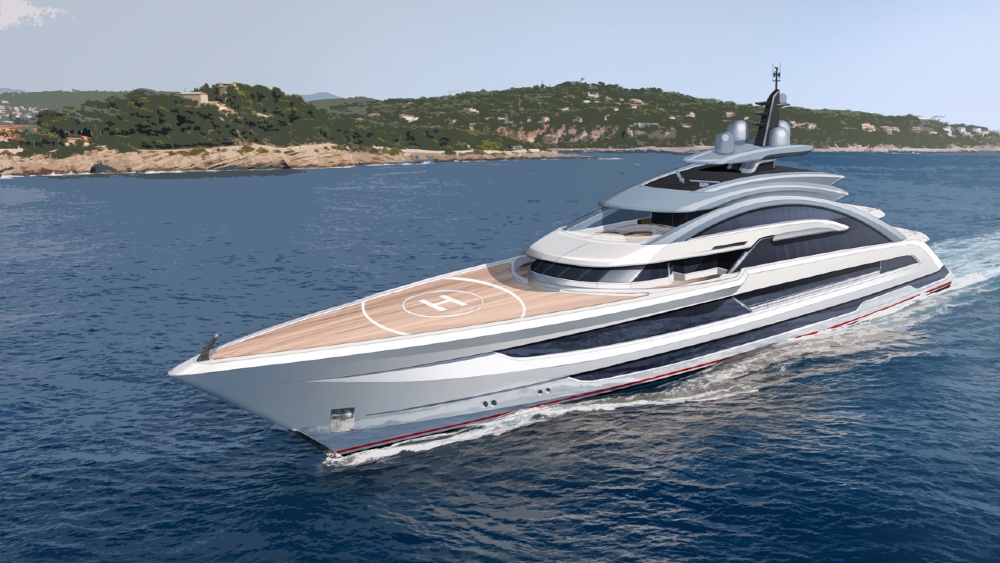 Some might say it takes backbone to build an owner’s dream yacht. Nerves of steel, so to speak. But few shipyards take that metaphor literally. When Heesen’s 262-foot aluminum Cosmos is completed, she will be the first boat in the world to draw its strength and rigidity from a flat metal bar. Reminiscent of an I-girder support beam used in the construction of skyscrapers, Heesen has coined it the “Backbone.”

Currently in build at the Dutch shipyard’s facilities in Oss, Cosmos—whose hull and superstructure were joined together this month—was commissioned by an experienced owner with a penchant for speed. Requesting a cruiser at the 200-foot mark is one thing, but when the yacht extends upwards of 260-feet, the physics become more challenging, says Mark Cavendish, sales and marketing director at Heesen.

“Weight is the big enemy of speed, so to keep the weight down we had to build in aluminum which is much softer than steel,” Cavendish told Robb Report. “We needed to get strength and rigidity into the hull and stop it from flexing, so we developed the now patented Backbone technology that allows us to build a long hull and still keep it rigid.”

The Backbone gives Cosmos structural rigidity so it can reach 30 knots. Hull and superstructure were joined this month.  Heesen Yachts

Developed in partnership with Dutch hydrodynamicists Van Oossanen, Cosmos’s fast displacement platform is essentially made up of two long, flat metal plates joined together by a vertical plate in the middle. The strength and rigidity centers from the top of the deck, to the port and starboard sides, and down to the bottom of the keel, says Cavendish, while “the hull itself is basically there to keep the water out and the furniture in.”

To deliver on the yard’s promise of a near 30-knot top speed, four MTU engines totaling 19,000 horsepower will drive two controllable pitch propellers.

In addition to size and speed, the owner’s brief included a fully certified helipad. This, says James Russell of Winch Design, determined the length and proportions of the bow, as well as the position of the superstructure. When not being used as a helipad, the bow features a 16-foot-wide cinema screen that pops out forward. Integrated sofas for starlit film viewing sink completely flush to the deck when not in use, so as to be in compliance with helipad regulations.

The helipad converts into a social area by day and mini-cinema at night, with a movie screen on the foredeck.

A full-beam, 885-square-foot sun deck is another important design element for the owner, Russell told Robb Report, who adds that “the client intends to spend a lot of time up there with guests and family.”

Large, sweeping panes of glass trace the arching line of the superstructure, filling the Sinot-designed interior with natural light. On the main deck aft is a 23-foot glass-bottomed pool with a waterfall that plunges from the deck above and shining down on the wellness retreat below. This area opens up to the transom and portside platforms to create a fully fledged beach club.

With Heesen building ever-larger superyachts, the patented Backbone could be used on future builds.  Heesen Yachts

With so much riding on Heesen’s new patented technology, is the Backbone a one-off? “That depends on who wants to build another boat like Cosmos,” says Cavendish. “We’re building bigger and bigger boats now. Cosmos is our largest to date, and if somebody else comes along and wants to do something similar then I’m sure we’ll roll out the Backbone again when needed.”

Cosmos is scheduled for delivery in April 2022.