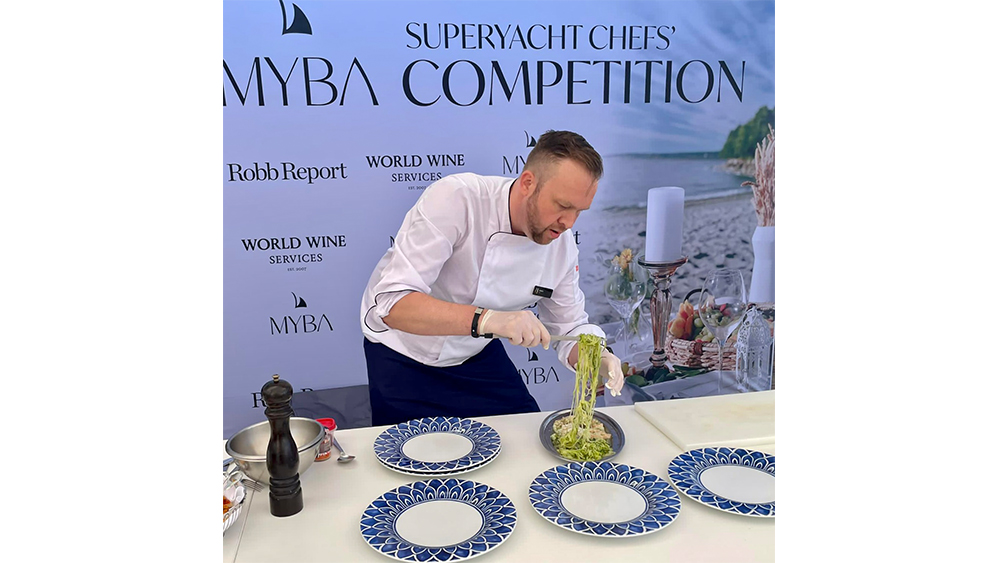 Being a chef on a superyacht is one of the most challenging jobs in haute cuisine. Not only are you confined to a rolling galley that is often smaller than most restaurant kitchens, but you’re cooking for millionaire owners who expect exceptional meals. Every time.

Judging from last week’s Superyacht Chef’s Competition, a seminal event of the annual MYBA Charter Show, the quality and creativity of oceangoing cuisine is just as sophisticated as the restaurants they compete with on land.

The ultimate beach appetizer was plated and presented to celebrity-chef judges of Michelin-starred restaurants.  Courtesy MYBA

The event was hosted in Barcelona’s superyacht hub Marina Port Vell. One of Europe’s culinary capitals, Barcelona has 25 Michelin-starred restaurants across the city and province. Four of the judges for this year’s competition are among the most respected chefs in the Catalan region. The MYBA Charter Show also attracted brokers from around the world, who looked for the highest standards among charter yachts and crews, including the cuisine, for their high-net-worth clients. (Disclosure: Robb Report is a sponsor of the event.)

This year’s theme was “Mediterranean Beach Picnic.” The competition was divided across three sizes of superyachts, with a “Signature Beach Cocktail” contest running in parallel.

The rules were simple: All ingredients had to be prepped and cooked aboard the yachts, before being transported ashore where the dishes were decorated, plated and presented, within a 30-minute window, to the celebrity chef judges. The pressure was on, not only because of the experts tasting the food, but also because of the short timeframe.

Chef Anthony Fossani and Chief Stewardess Leah Efraimov from the 150-foot Pisces won the 42- to 47-meter (138- to 155-foot) yacht category for both the beach picnic and cocktail competitions.  Courtesy MYBA

“It’s not an easy task preparing food to be transported from the yacht to the beach,” Antonio Mellino, chef and owner of Quattro Passi on Italy’s Amalfi Coast, told Robb Report. “Dining on a yacht is comfortable, but on a beach, less so. So, we’re looking for the chefs who best understand this and create a memorable dining experience using fresh ingredients.”

Mellino, whose restaurant has two Michelin stars, has been a longtime supporter of the superyacht chef’s competition.

Other members of the celebrity judging panel included Oscar Manresa, who opened Torre d’Alta Mar in 2002 and is a pillar of Barcelona’s gastronomic scene; renowned Catalan twins Javier and Sergio Torres of Cocina Hermanos Torres, which has earned two Michelin stars; and Romain Fornell of Caelis outside of Barcelona. In 2001, at the age of 24, Fornell became the youngest-ever chef to receive a Michelin star for his culinary skills.

The event was held in Marina Port Vell, with about 20 superyachts attending.  Courtesy Jody Dunowitz

Mike Jennings of The Hospitality Hut, a first-time judge who has worked under some of the UK’s most decorated chefs, underlined the high expectations before the competition. “We’re looking for innovative ideas, something that’s more than just picnic sandwiches,” he said. “We want the chefs to think outside the box and come up with something really quite special.”

The winners went way outside the box, serving gourmet dishes to create the ultimate beach feasts. Unlike cook-offs on television, where chefs work in the same kitchen, this competition took place over three days, with one day devoted to each yacht category. The judges chose the winners and revealed the results last Thursday.

Anders Pedersen, chef of the 203-foot RoMa, with chef Nick Ketner, took first place in the 48-meter (158-ft.) and over category.

Pedersen and Ketner created a citrus-cured, wild sea bass tartare topped with sea buckthorn and pomegranate caviar that delighted the judges for its epicurean flare. The main course was flame-cooked scallops and scampi served with sweet potato foam and crumble. That flame cooking was unique among competitors and gave the Norwegian-born chef an edge. He clinched the top prize with a trio of Mediterranean desserts, including a Catalan-inspired, lavender crema presented in an edible almond ramekin.

“I wanted to bring fine dining to the beach,” Pedersen told Robb Report after the win. “I had irons specially made to brand my scallops with the yacht’s name, RoMa. When you charter a boat for almost half a million a week, you expect Michelin-level cooking, even in a picnic.”

The crew of superyacht Mirage, chef in the center.  Courtesy MYBA

In the 42- to 47-meter (138- to 155-ft.) category, Anthony Fossani of the 150-foot Pisces took first place with his highly creative collection. Almond, mint, charred octopus, seared Ikejime tuna, Galician blonde carpaccio and Mediterranean lemon were brought together in a collection of delicious dishes artfully presented in a mosaic ceramic bowl. Fresh from a 2021 refit, Pisces is a popular family charter boat that will be cruising the Mediterranean—which was reflected in Fossani’s choice of local ingredients. Chief Stewardess Leah Efraimov also presented the winning cocktail in this category.

Also celebrating a double win in the 41-meter (135-ft.) and under category was the 128-foot Snowbird. Chef Michael Hobbins pleased the judges with his fresh approach to Catalan ingredients.

Hobbins, who had joined Snowbird only three weeks before the competition, took inspiration from chief stewardess Chloe Maloney’s winning limoncello-based cocktail. He served poached lobster with Perlita caviar, a trio of salads, chilled gazpacho with aged Spanish olives and a basket of mini fennel pollen rolls.

“I designed the picnic so guests can enjoy it as a salad or lobster roll, accompanied with a lemon which serves as a palate cleanser,” Hobbins told Robb Report. For dessert, the chef served a Valencia lemon sorbet with raw boba-bean praline.

The judges also awarded the Heart and Soul prize to chef Shay van der Kraan of the 136-foot sailing yacht Shenandoah of Sark for his medley of marinated Mediterranean produce.

Despite the fierce competition, the week was considered a successful showcase of the high caliber of superyacht cuisine.