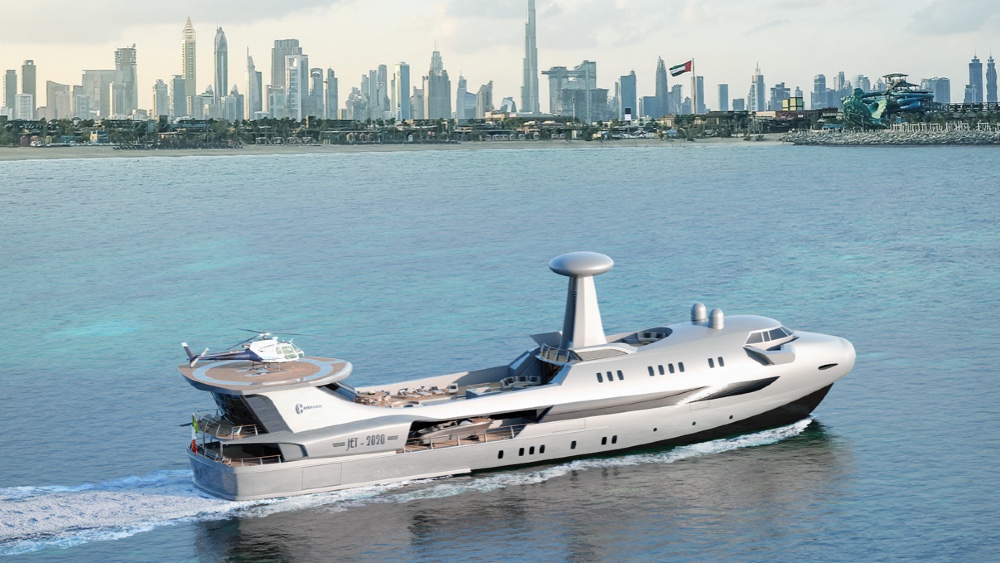 Is it a bird? Is it a plane? No, it’s Codecasa’s new Jet 2020, which takes aviation-inspired design and applies it to a 230-foot superyacht. The latest creation from the Italian shipyard is the epitome of cross-pollination design in the 21st century.

Due to begin construction later this year, the 230-footer will become the shipyard’s new flagship. The project is the brainchild of Fulvio Codecasa, who has owned the Viareggio-based shipyard for the past 40 years. The Codecasa family, in fact, has been in the boat-building business since 1825.

While the shipyard is known for its custom designs, the Jet 2020 is unlike any other yacht it has ever built. By applying an aircraft’s lines to a yacht’s hull, Codecasa said he wants to set “a unique example” that he hopes will ignite a trend.

The Jet2020’s profile resembles a modern aircraft, including the rounded bow area with the aircraft-style cockpit and the tail on the stern.  Codecasa

Aeronautical design features include the rounded forward section of the yacht, with a helm area that resembles an airplane’s cockpit. The central section of the superstructure is more akin to a fuselage with a sundeck, while the aft end ticks up to echo the tail of an aircraft. The main benefit of this aviation-inspired shape is large internal volume, says Codecasa, describing the interior as “huge.”

The aft beach club at sea level is possibly the most stylish section of the yacht. It has an elevator and is connected to a sky lounge. With floor-to-ceiling windows in the main salon and dining area, the views promise to be unrivaled. A helipad sits atop, so the owners can indulge in real flight, too. When heading ashore, a double tender area with the look of a jet engine is located along the side of the yacht.

The bow area on the main deck is dedicated to the owner’s suite. There are four guest cabins on the lower deck. For those looking to maximize outdoor time, the sundeck is a massive 66 feet by 33 feet, with a covered gym, sunbathing pads and a 20-foot recessed swimming pool.

While the majority of the yacht’s technical information has yet to be revealed, Codecasa says the Jet2020 will have other aviation-inspired tech features, like radar antennas installed inside a carbon-fiber dome. He said they will be designed “in the typical style of the AWACS aircraft,” the Boeing E-3 Sentry.

The Jet2020 will be built to Lloyds and MCA standards, so it can be registered under the most important international certification flags.