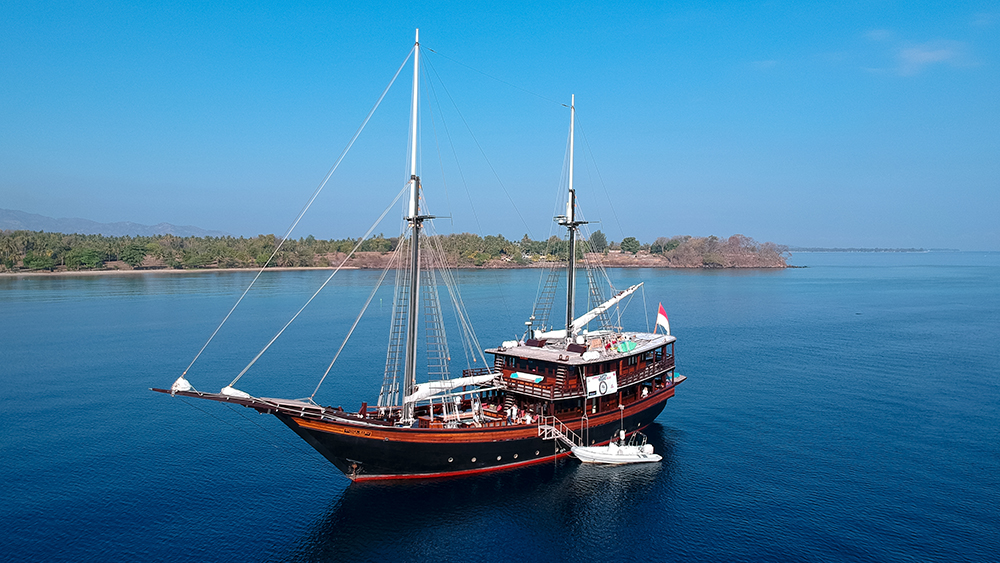 It’s been a horrific month for the residents of Lombok, Indonesia; a series of earthquakes have caused enormous damage and taken hundreds of lives. At last count, roughly 500 people perished as a result of the quakes, leaving the homes, properties, and lives of thousands of others severely damaged over the course of multiple roughly 6.0-magnitude earthquakes and as many as 1,500 aftershocks stronger than magnitude 2.0.

There is some help on the horizon, though, coming from the yachting community. The Indonesia-based 167-foot sailing yacht Dunia Baru recently delivered badly needed supplies to the locals of Lombok.

Dunia Baru’s owner, Mark Robba, was joined by a group including family, friends, the team at Indo Yachts, 37 South Yachts, and Black Tomato over two days to help coordinate the delivery of thousands of supplies. They were assisted by the military police in Medana Bay Marina, just north of the capital of Mataran. “As yacht owners, I strongly believe that we are in a fortunate position to be able to use our yachts as a platform to help those in need and make a difference in the areas we cruise in,” says Robba.

With many of the roads impassable due to debris and flattened homes, numerous rural towns were without access to aid and in desperate need of supplies. Thanks to Dunia Baru providing the vehicle, it was a team effort to get the supplies in order. As soon as word got out, generous donations from charter clients, colleagues, friends, and family across the world started pouring in. Among the many provisions provided were blankets, tarps, gasoline, diesel fuel, fresh water, baby formula, and diapers. In order to help on-site as much as possible, the 18 crew on board Dunia Baru worked tirelessly cooking and preparing 500 fresh meals to locals and helpers over the two days.

A total of eight trucks were also loaded and sent out to various villages in need. “About 80 percent of the houses and structures appeared to be totally destroyed over most of north Lombok. Nearly everyone is living under tarps—they are fearful there will be more earthquakes,” says Robba.

We spoke to Robba and Nikko Karki of Indo Yachts for an update on the situation in the last few weeks. “Visitors should not be afraid to visit,” Robba reassures. “What Lombok needs now is everyone’s support, and the best way to get their economy moving forward is to support them through tourism.”

Karki donated his mother’s wheelchair from a hip operation performed last year and received an update from the team that took it to the woman in need: “The joy on her face and the video of her and her family getting her a tool for moving her around really hit home. It gave me a feeling of how we need to help each other, and no gesture is too small.”

While the people of Lombok have begun to rebuild, there is still time to donate and help if you would like—after all, Indonesia is a popular travel destination with private islands and luxury resorts. To find out how you can get involved, check the Dunia Baru blog.