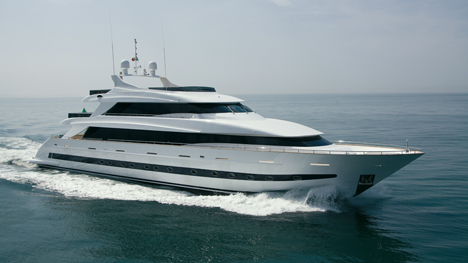 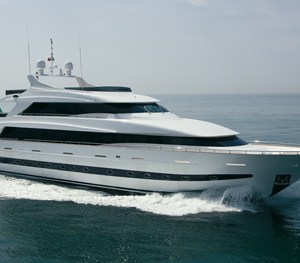 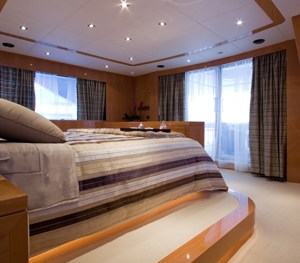 The new 43-meter Nadara from Tecnomar has a sleek, stealthy look with its aggressively pointed bow and tiger-stripe black curves created by three unbroken levels of windows. The 131-foot Nadara is also the world’s largest superyacht with a tri-deck configuration mated to a planing hull, her two engines developing 3,650 horsepower.

Putting a sizable tri-deck superstructure on a fast and furious planing hull is rare for a boat this size and will no doubt attract only a specialized following. But the owners will also enjoy Nadara’s top speed of 30 knots (compared to most displacement or semi-displacement top speeds of 12 to 18 knots) without sacrificing the creature comforts one would expect from a tri-deck design.

The Tecnomar 43 delivers on all fronts. She’s fast, sexy, and big, with plenty of open deck space. The interior is also airy and spacious, featuring light-colored woods like African wenge and Tanganyika walnut. The salon’s picture windows offer a 360-degree view of the sea, and the adjoining dining area has seats for up to 14 guests. Below decks, there are six guest cabins and four cabins in the bow for the crew. The owner’s suite is a full-beam affair, positioned on the upper deck for an exceptional view. It even boasts a private terrace with its own dining area.

Tecnomar, established in Viareggio, Italy, in 1988, allows owners to customize their yachts heavily, going beyond choosing interior fabrics and decor and allowing them to have a say in the position and size of the rooms. Tecnomar is also working on a new 55-meter (180-foot) maxi-planing yacht that will dwarf yachts with planing hulls. But for now, the 43 is the queen of the ocean when it comes to big, fast tri-deck yachts. (011.39.0585.51616, www.tecnomar.com)