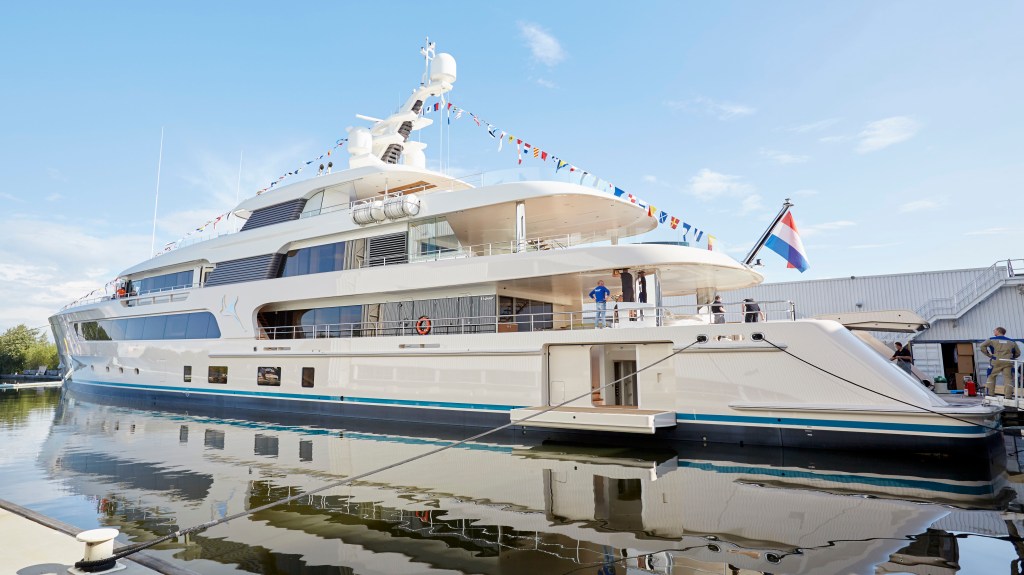 Feadship’s new 236-foot superyacht Samaya is a scuba-diver’s dream, specifically designed for exploring the world’s best, and uncharted, underwater meccas. After the 2014 Monaco Yacht Show, the owner spent four days at Feadship’s De Voogt facility in the Netherlands explaining his 236-foot dreamboat, while the designers went about creating the initial concept. The owner wanted a custom superyacht that could not only reach the planet’s most remote waters, but one that could be used to study marine life found there.

Feadship created custom design cues to meet the owner’s expectations, like a teal-colored waterline with the same color as a rare aquamarine fish he once saw diving, or the giant backlit manta-ray emblem that symbolizes his commitment to the preservation of that species. The designers even included a powerful curve in the bulwarks that mimic the muscles of a bull shark. “We created these after listening to the owner share stories about his diving adventures,” says Jan Schaffers, a Feadship De Voogt designer. 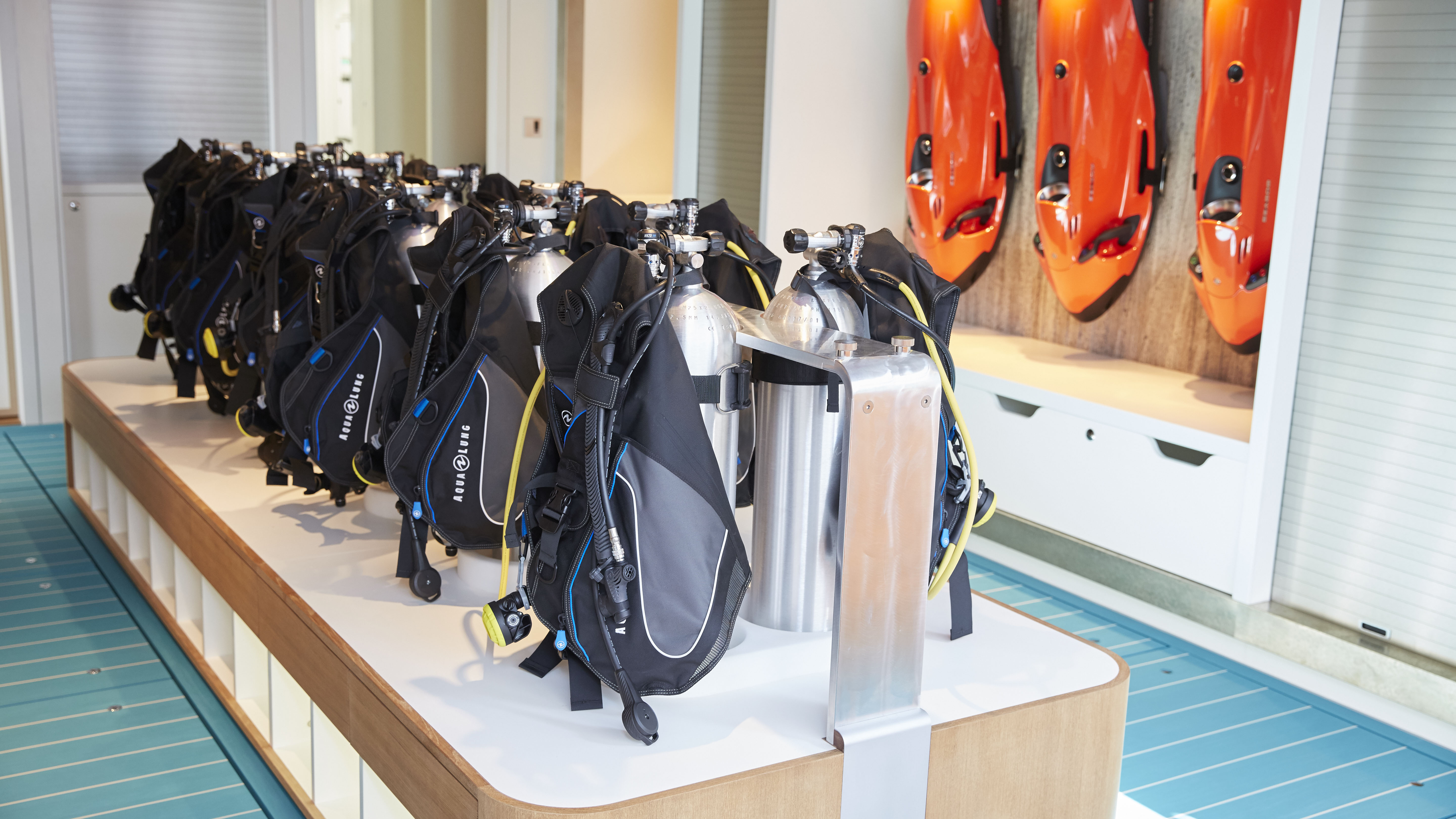 As might be expected, explorer-yacht Samaya has a dedicated dive room in the stern of the boat, with a custom, teal-colored floor and metallic-colored ceiling. The facilities include the most advanced scuba equipment, including a nitrox-enriched air system. Samaya’s 29- and 24-foot tenders, wearing the same colors as the mothership, will carry divers to remote, shallow waters that would otherwise be inaccessible from Samaya. Back on the yacht, a custom plunge pool, filled with hot water, will make the post-dive recovery faster and more pleasant.

The exterior was also designed for comfort. Samaya’s sundeck has both dining and relaxation areas, capable of handling a large crowd. The area has two private “resting beds” against the mast arch, as well. They have their own ventilation systems, so they can be climate controlled if the person wants to take a nap in the noonday sun, or just watch the beautiful ocean at night under the stars.

Feadship worked with RWD on a bespoke interior based on the owner’s love of international cultures. The guest suites were also partially designed by the owner’s children, with custom decor and furnishings. The lounge on the bridge deck has an exotic, tropical theme, and will be used as a cinema room. 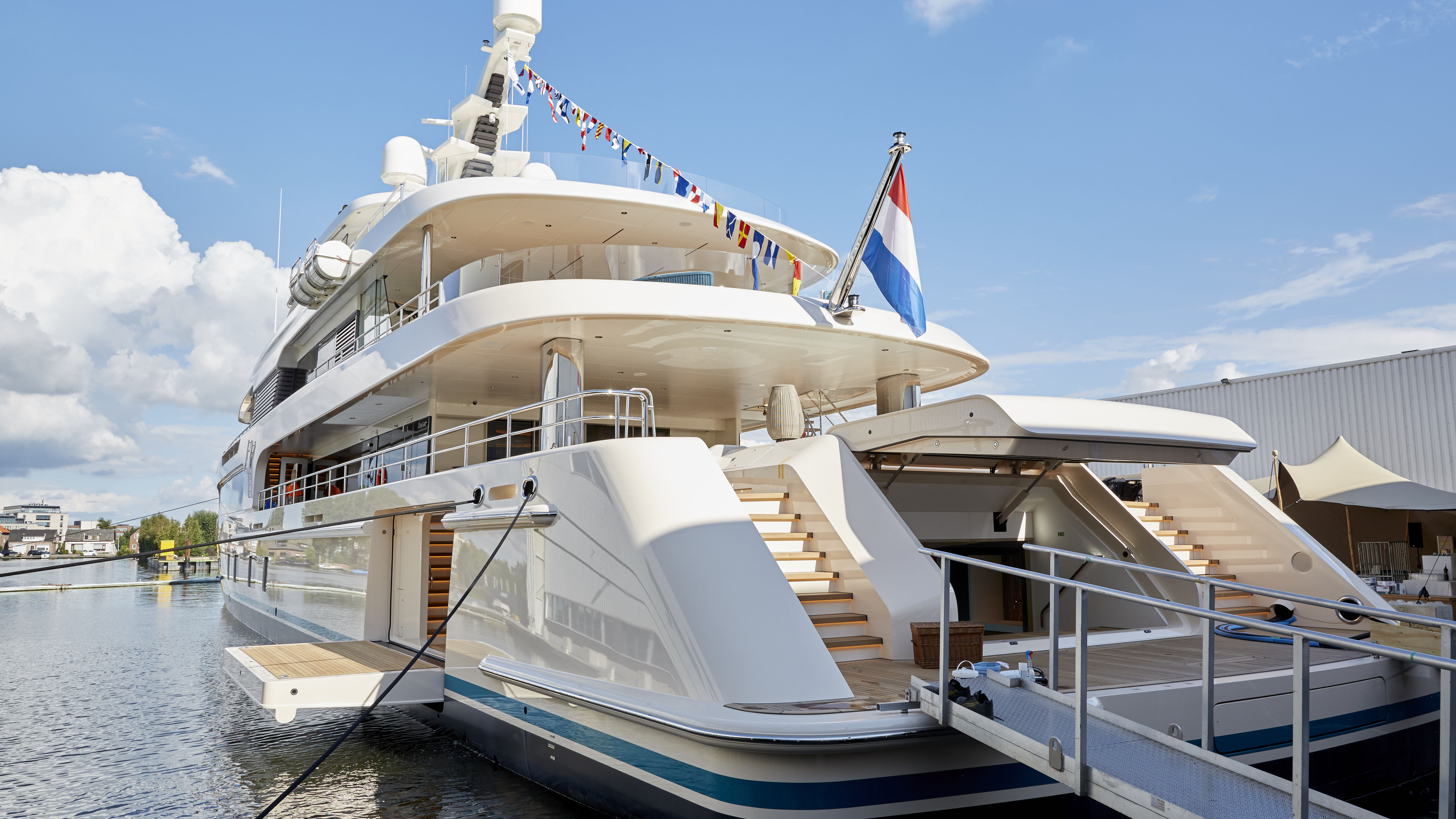 The European owner spends much time in Asia, so Samaya will cruise to that part of the world often. As such, the yacht was designed like an explorer yacht to travel for long periods without contact with other vessels or stopping at ports. Beyond his personal diving passion, the owner would like to see the yacht used for research of rare species of marine life.

The owner chose a subtle lunar white exterior color because it reflects the surrounding light, often turning a warm pink during sunsets. There is no doubt that Samaya will reflect many different seascapes as it travels in the quest to see the most remote waters of the planet.