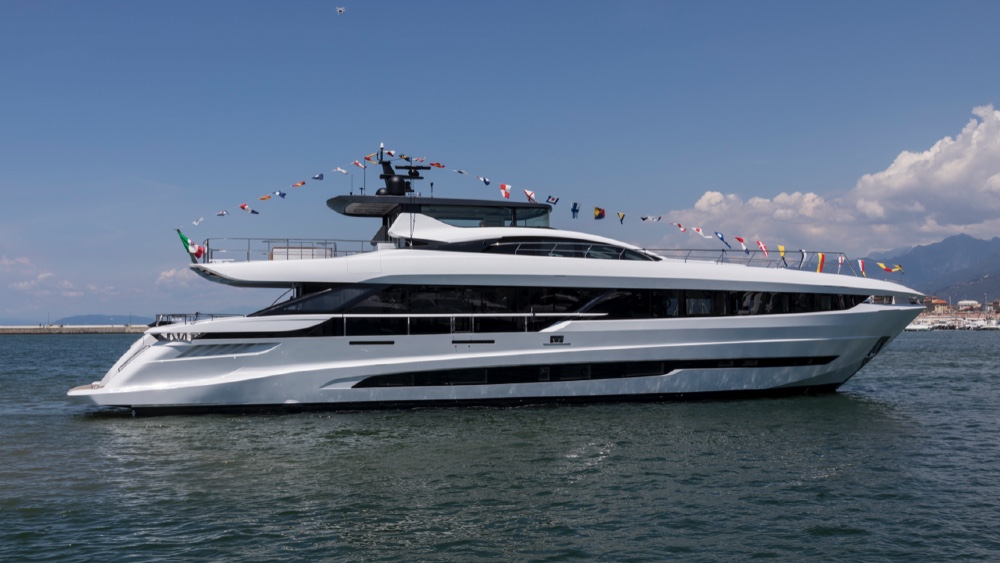 Call it the summer of love. Italy’s Overmarine Group will have three important launches this summer, starting with a 108-footer built for a US client. That new Mangusta GranSport 33, which performed sea trials last week, is the smallest model in the Italian builder’s GranSport series.

The Alberto Mancini design breathes performance, with an aggressive bow and profile that sweeps forcefully back towards the stern. “Mancini was asked to feature an elegant profile and strong personality, skillfully combining sleek lines, minimalism and a perfect balance between exteriors and interiors,” Stefano Arlunno, Overmarine’s group area manager for the Americas, told Robb Report. “She has the heart and soul of a true megayacht.”

The new Mangusta also has the belly of a racer. The four 1,000-hp Volvo Penta engines, coupled to its IPS pods, deliver a top speed of 26 knots—greased lightning for a yacht this size—but the pod configuration also reduces vibration and internal engine noise to make the ride much more comfortable. Having four smaller engines, rather than two large ones, allowed Overmarine to use the space savings from the engine room to increase the size of guest staterooms.

The 108-footer will have a draft of just over six feet, so it can venture into shallow-water areas like the Bahamas without compromising on its big interior volume.

At 430 square feet, the master cabin on the main deck is palatial, and the four guest staterooms on the deck below are unusually spacious. The 603-sq.-ft. flybridge can be designed in either open or enclosed versions. “The owner chose the enclosed option so he could have a real sky lounge with an indoor television room,” says Arlunno. “Our interiors department worked side by side with Mancini and the owner to select the perfect furniture, furnishings, and décor. The final outcome is a stylish, but it’s also an extremely functional yacht, which is what the owner wanted.”

The yacht’s draft of 6’2” will allow the yacht into shallower waters like the Bahamas, without compromising on interior volume. The exterior space has also been maximized for socializing. The bow has a sunbathing area and Jacuzzi, along with sofa and table. The aft platform at the transom can also be extended to become a waterside terrace.