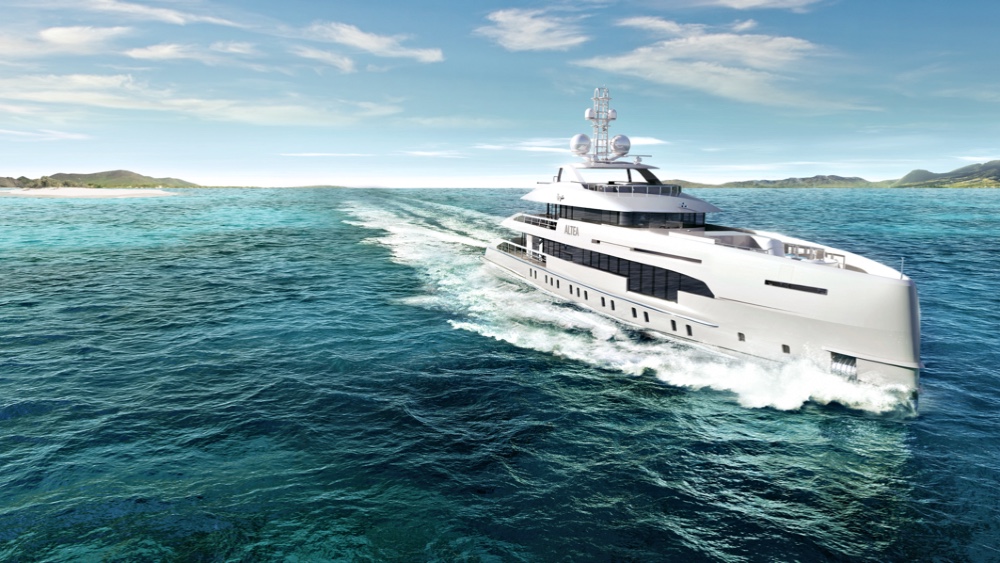 How does a superyacht builder keep a yacht series fresh, especially with virtually identical exteriors? For Heesen’s Project Altea, two solutions presented themselves: Customizing the interior and using the latest engine technology. The 164-ft. Altea, is not only the sistership to Home, Heesen’s groundbreaking hybrid yacht launched in 2017. The two are more like identical twins, using the same “Nova Plus” exterior design and engineering platforms developed by Omega Architects.

Three years on, however, Altea shows how to evolve a series by using the latest twin MTU 12V 2000 diesel engines and having Cristiano Gatto design a very different type of interior than Home. Whereas Home had a fairly minimalist, stark interior, Gatto’s Altea creates a relaxing atmosphere, with light- and neutral-colored tones, abundant use of wood veneers, and plenty of light streaming through floor-to-ceiling windows. The Italian designer used stained canaletto and American walnut as the primary woods for the flooring and joinery, while also decorating areas like the salon and master suite with custom carpeting. Gatto’s team also employed soft leather and in places, velvet, as trim for what turns out to be a very elegant, understated interior. The sky lounge has a built-in entertainment center, with a bar, and opens through glass sliders to an outdoor dining area.

The yacht also has a master suite, VIP and four guest staterooms to accommodate 12. The owner’s suite and VIP are on the same level as the salon. The full-beam owner’s quarters include a large bedroom and en-suite with a separate shower and tub, as well as an office. On the lower deck are the four guest staterooms, a full gym and five cabins for a crew of nine.

The full-beam owner’s suite includes an office, en suite with separate shower and bathtub, as well as access to the main salon.  Heesen Yachts

Like Home, Altea’s exterior strikes a distinctive pose, with long, lean, window-dominated topsides that extends all the way forward, creating a protected, teak-soled bow area for open-air lounging. At the stern, the aft platform is positioned level with the water, providing another area for lounging and simply enjoying the view, or launching toys into the sea. Omega Architects also designed portions of the superstructure to hang over the staterooms, providing natural shade while also integrating the architecture with the large expanses of glass.

Altea’s 1500-hp MTU engines will give her a maximum speed of 19.5 knots, which makes her four to five knots faster than a traditional displacement yacht. At 12 knots, she has transatlantic range of 3,750 nautical miles. Her large, comfortable interior, shallow-draft hull and long range make her an ideal yacht for the Bahamas or Mediterranean, while also allowing owners to move quickly between destinations. She is scheduled to be launched in 2023.

See more photos of the Altea below:

The Skylounge, with interior by Cristiano Gatto.  Heesen Yachts

Another social area at the transom.  Heesen Yachts