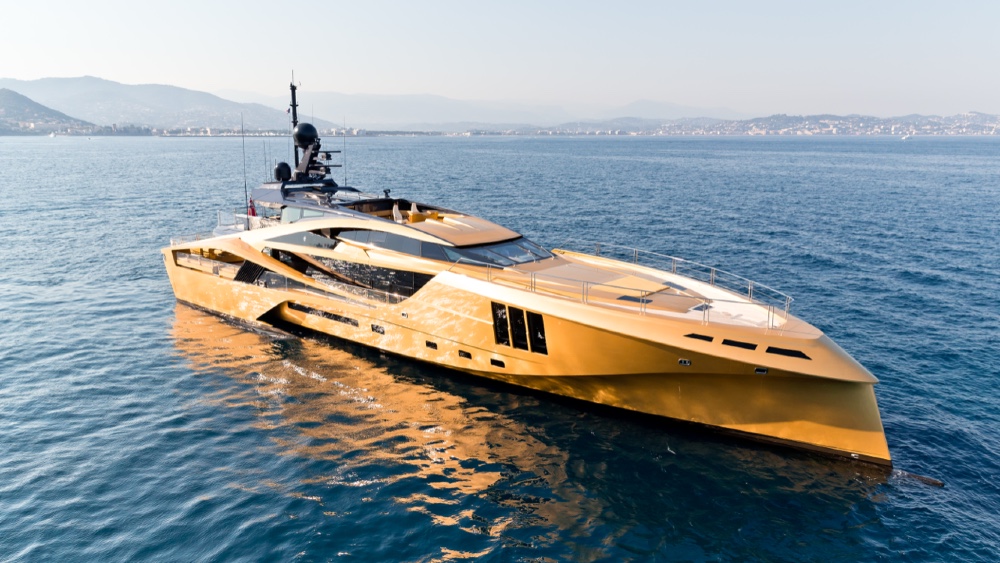 If Bond villain Francisco Scaramanga could buy any yacht, the man with the golden gun would choose 160-foot Khalilah. Bow to stern in custom color Cordova Gold, with a matching 23-foot gold tender, this yacht was built to turn heads.

Khalilah is also historic: She is the first all-carbon superyacht ever built and the first hull in Palmer Johnson’s Supersport series. The owners have a penchant for gold since Khalilah is their second gold yacht, and third Palmer Johnson.

“These owners wanted something that really stands out, that was very important to them,” SuperYachtsMonaco managing director Jim Evans told Robb Report during an exclusive virtual tour. “It’s not just the color of the boat, but the design that is radical compared to other yachts. If you don’t want to be seen and recognized on the water, then this is not the yacht for you.”

There are Arabic symbols—Khalilah means “friend” in Arabic—and a statue of the Buddha, as well as whimsical design features across the undeniably eclectic interior.  SuperYachtsMonaco

With a top speed of 26 knots, however, the “sportiness” refers more to the “radical” exterior than performance. Scalloped edges along the sides meet at a “wave-penetrating” bow, while both stern quarters feature sponsons that resemble those on a trimaran hull. The yacht is currently in Genoa undergoing a two-million Euro refit to have stabilizers fitted as well as the stern area lengthened to create a larger beach club.

Like the gold exterior, the interior is also eclectic. Clashing color palettes are paired with an diverse assortment of materials and cultural influences. When in port during the making of the virtual tour, two of the owner’s Japanese BE@RBRICK figurines were placed on the aft deck. Coveted by pop art collectors, they’re a good litmus test for whether the rest of the interior will be to a potential owners’ liking. There are also sculptures of Buddha, a squid-like chandelier in the main salon, and Arabic influences in the joinery.

A cactus-wood dining table and sunpads on the aft deck lead into the full beam main salon, featuring 20-foot floor-to-ceiling windows on both sides. Light and airy it is the hub of the yacht. Karelian Birch is used on the walls and bar–it was the only wood used by Peter Carl Fabergé to make the only organic-material Fabergé egg for the Russian royal family in 1917). Islamic-inspired lattice work begins in the main salon and continues into the cabins and hallways; Khalilah meaning “friend” in Arabic.

The golden vessel is the first-ever superyacht built of carbon fiber.  SuperYachtsMonaco

In an unusual twist to the layout, the master suite forward shares its location with the main deck VIP. What this layout loses in space makes up by providing an extra, fifth cabin. A second full-beam VIP is located on the lower deck.

Other quirky design features include the open-plan galley with a breakfast-bar setup, the bridge deck with its upper helm and jacuzzi arrangement, and the “under the sea” mosaic tiling in the children’s twin cabin, with a polished gold mosaic shower floor and bench seat.

Khalilah has kept to Mediterranean waters since delivery. A hatch on the port side of the aft deck leads to a large bathing platform where toys and tenders can be easily accessed and launched. Not quite a beach club, it offers a space away from the aft deck for watersports enthusiasts.

The interior is a culture clash of classic, contemporary and avant garde that somehow works. Note the electronic-eyed octopus chandelier on the ceiling.  SuperYachtsMonaco

“The owner had a large amount of input in the design, working with the build captain on the general arrangement as well as the finishes,” says Evans. “The interior design is either love it or loathe, but the build itself is absolutely amazing, and few yachts will ever make a statement like Khalilah.”

Khalilah is listed for sale with SuperYachtsMonaco for $31.4 million.

Check out the rest of the yacht below and then look at the highly detailed virtual tour.