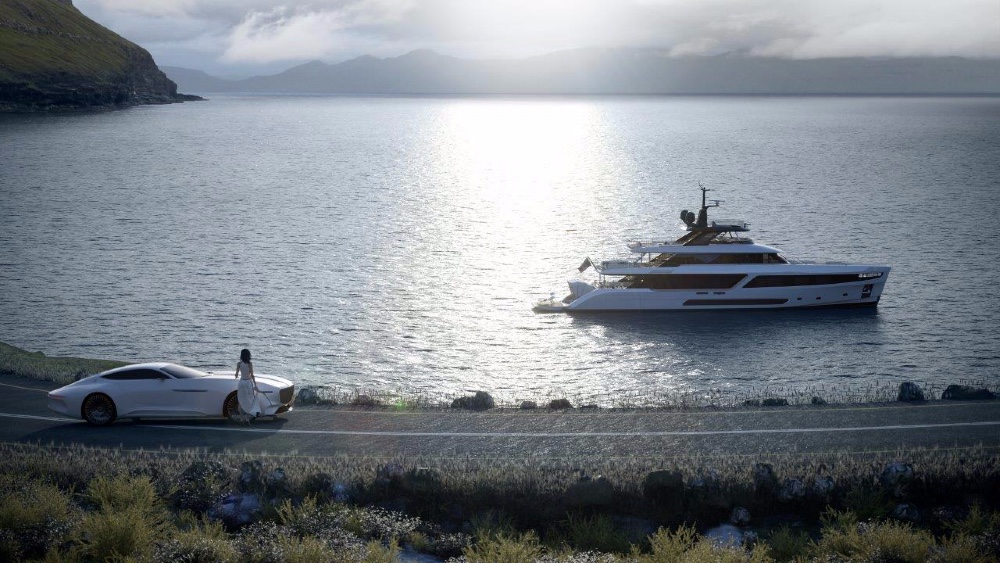 Italian superyacht builder Benetti announced this week the 121-foot Motopanfilo, a brand-new design inspired by Benetti’s 60-foot “navettas” of the 1960s, but thoroughly modern in its much larger dimensions. Its Delfino, Gabbiano and Mediterraneo models were some of the most popular yachts of their time, representing a status symbol that only the rich and famous could afford.

“The Motopanfilo series was the name given to the first leisure yachts in the 1960s,” says Giovanna Vitelli, vice president of the Azimut-Benetti Group. “They were owned by Princess Grace and Prince Rainier early on and that followed with rock stars like David Bowie in the 1980s. At the time, they were true objects of desire.”

Designer Francesco Struglia was tasked with modernizing the new Motopanfilo exterior lines, which is now under construction, but keeping many of its classic elements. Rome-based Lazzarini Pickering Architetti was responsible for the interiors. “We’re not trying to be nostalgic with the design, but give owners what they expect these days—large sizes and interior volumes,” said Struglia.

The private rounded observation deck, complete with a transparent protective wall, is one of the yachts most striking features.  Courtesy Benetti Yachts

Struglia used a “shell concept” for the exterior in order to create the large volume and lengths needed for the yacht, but also keep the elegant, harmonious look of the earlier generation of Motopanfilo designs. He used clean-cut lines to give the exterior a simple, almost austere look with tapering forms. With a 30,000-foot view, one can see the shell concept in action. Up close, the Motopanfilo is simple elegance.

Two noteworthy features stand out: The shell-like shape of the covering over the beach club, definitely reminiscent of 1960s yachts (but uses contemporary technology to open and close), along with a stylized swim platform at the stern. “We wanted to give the yacht the rounded stern of the past, but with an integrated beach terrace,” says Struglia.

The second feature is the “observation deck” on the upper level, which is a private retreat where the owners and guests can either watch the stars at night, or enjoy solitude during the day.

The skeleton of a large whale provided the inspiration for the salon, which has a rounded ceiling and is defined by glass windows.  Courtesy Benetti Yachts

Lazzarini Pickering’s interior is brilliantly conceived. The architects had been one of the first to create ultra-modern interiors in 2004 for Benetti’s Sai Ram, at a time when classic styling was still the norm. Now, they’re creating a retro-ish interior at a time when ultra-modern is in vogue. “We came up with the idea of using the skeleton of a large whale as our inspiration,” says Carl Pickering. “It provided a large, curving framework that gave a sense of rhythm to the space.”

The beams across the ceilings serve as structural ribs that leave the space open and minimize the need for walls, effectively leaving the full-height windows as the most readily noticeable structures—and of course, providing stunning views of the sea. Mirrored surfaces also expand the perception of interior space, while providing a brighter interior.

“The idea was to create a new sense of classicism,” says Pickering. “Most of the yachts these days have interiors that look like apartments. We wanted to create a yacht interior that would work for this new age.”

The clamshell covering over the rear beach club is part of the rounded stern design, a common feature of 1960s yachts. But the vertical bow is indisputably a contemporary feature from 2020.  Courtesy Benetti Yachts

The salon is a good example. While the wooden bulkheads of the 1960s have been replaced by the glass, the architects used a light oak color on the floors and ceilings, adding to a retro look that is bright and contemporary. They also applied light touches of white and navy wood, which would’ve consumed many interiors in the 1960s. On the decks below, the architects also used the curve of the hull as the boundaries for the staterooms, rather than the straight walls that typically define below-decks cabins.

The Motopanfilo is designed to reach speeds up to 18 knots. It is currently under build with plans to be launched in 2022.

“Internally, we called it the ‘Kennedy platform,’” says Vitelli. “It’s designed for someone with a sense of sophistication who will appreciate a subtle design incorporating elements of the past.”

Check out other images of this unique yacht.