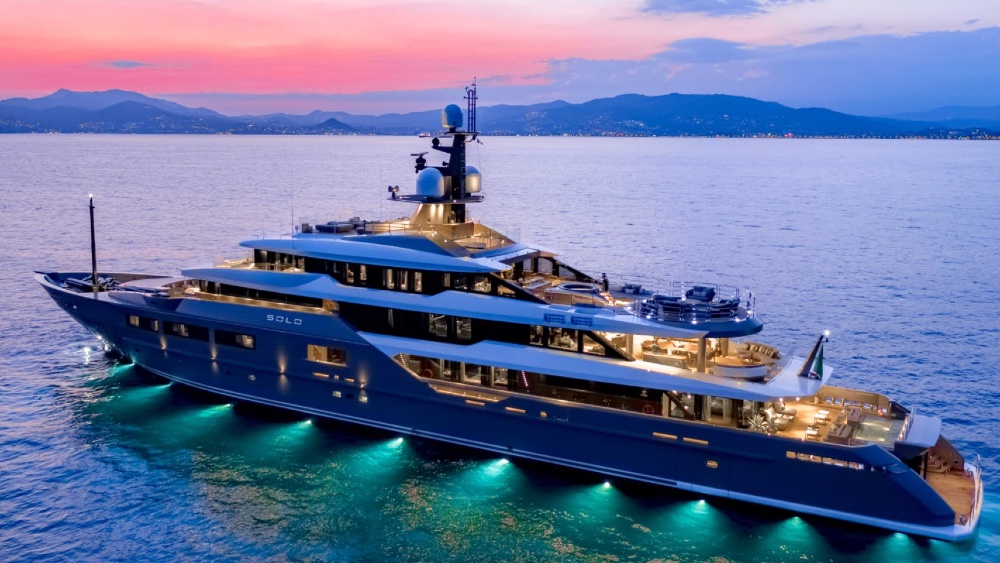 All Images Courtesy of Northrop & Johnson

Singular, one of a kind, independent.

Among her peers, the 236-foot superyacht Solo lives up to her name. Delivered in 2018 by Italy’s Tankoa shipyard, Solo was designed with parameters that were very different than most other superyachts in her category. With roughly half the internal volume of similar 230-ft.-plus yachts, she’s more fuel efficient and easier to maneuver. Solo also has one of the most environmentally friendly exhaust systems of any superyacht on the water.

The yacht has claimed multiple awards for her unique design, but reducing the internal volume accomplished more than creating a sleek profile, says Captain Andrew Johnson, who gave Robb Report an exclusive virtual tour of the boat.

The 236-foot yacht is less beamy and more slender than other yachts in her class, but the designers did not leave out multiple social areas like the sundeck.

“Her naval architecture makes her extremely efficient,” says Johnson. “We have a higher cruising speed of 14.5 knots without burning too much fuel and at that speed we have a 3,800-mile range. After a 12-day crossing from Genoa, Italy to Florida, we still had 35 percent of our fuel left.”

The propulsion system was also engineered to be more environmentally friendly than other vessels in her class. “We’re the only yacht that I’m aware of that runs a urea injection system on our main engine exhausts to decrease emissions,” Johnson says. “This echo spray system is more commonly found on cruise ships. We were the test for vessels this size.”

The Hug engineering and exhaust filters on the engines not only reduce emissions, but also let guests swim around the yacht, without the sight or smell of engine fumes.

The interior is more cosmopolitan than most superyachts, such as the grand piano and contemporary bar in the main salon.

Beyond the eco edge, Solo has a very distinctive look, with a dark-gray hull that makes a bold first impression and cosmopolitan interior that looks more like a New York City penthouse than a typical superyacht. The designers combined all sorts of materials, including white onyx, grained woods, and even leather floors.

There are also technical nuggets hidden in the design, including floor-to-ceiling glass windows.  “If you view the yacht from a distance it looks like high-gloss paint, but it is in fact glass with paint behind it,” says Johnson, adding that it provides a way to see out, but not into the yacht. “It’s also really easy to maintain.”

Solo has successfully chartered in and around the Mediterranean, as well as in the Caribbean, British Virgin Islands. Thanks to her 11-foot draft, she has also cruised the Bahamas.

The yacht also kid-friendly areas like the three-foot deep, 21-foot pool on the aft deck.

Set up for families with young children, Solo has distinct social areas that guests tend to gravitate towards. These include the winter garden on the main deck aft, which provides both privacy and views. The large salon on the bridge deck, with piano and contemporary bar, also provides the option of al-fresco dining. The 21-foot aft-deck pool, at three feet deep, is an ideal play area for kids.

Forward of the wheelhouse is the Portuguese bridge with enough seating for 18 people, while the dedicated owner’s deck includes a jacuzzi, and exclusive access to the sundeck.

“The sundeck is the preferred area on board because it’s so private,” says Johnson. “There’s just one way in and no one can see you from anywhere else on the boat. In front of the owner’s suite, there’s also a wraparound deck with a plunge pool, again affording complete privacy.”

The darker, more somber colors are a striking contrast to the lightness of Solo’s exterior.

The owner’s deck also includes a studio, or “master relaxation room,” that can be used as a study, reading room or private treatment room for the owners. A second relaxation room on the deck below is used for guest massages. In the evening, the bridge-deck salon or aft area becomes the hub where cocktails and hors d’oeuvres are served.

One of the problems with a virtual tour is that it’s difficult to accurately gauge the size of rooms or the types of materials. I found the same with Solo, with her broad combination of stones, woods and fabrics. The onyx, marbles and high-gloss cabinetry get lost when viewed in virtual reality. But Johnson’s fondness for the mix of flooring—wood interspersed with silk carpeting and with leather—brought it back into focus.

“I’m in the wheelhouse at the moment, standing on a leather floor,” he says. “You don’t get that often.”

Solo is listed with Northrop & Johnson for $74.5 million. Here is a video tour.

Check out the gallery below.