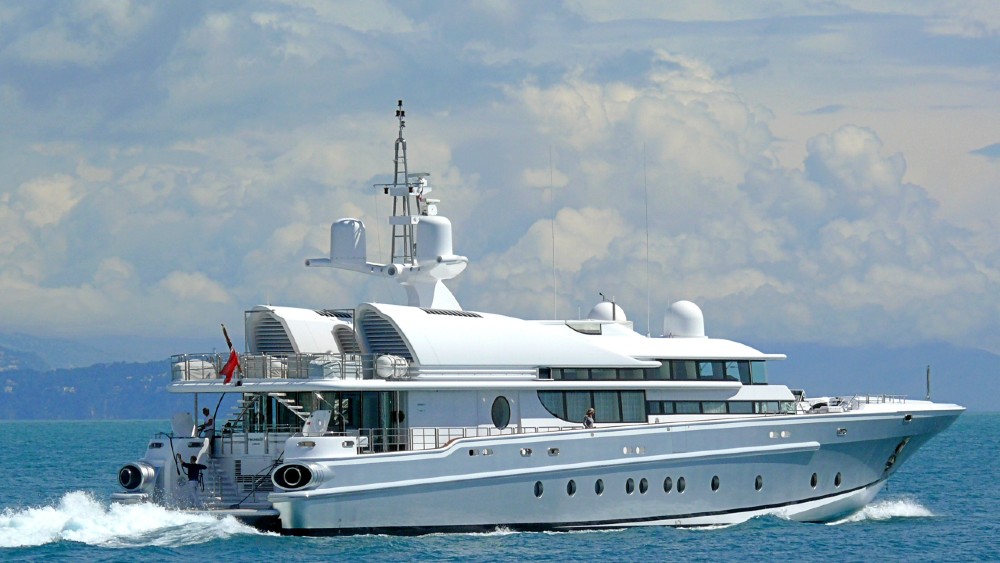 What happens when you commission flamboyant Italian designer Roberto Cavalli to do a spare-no-expense refit of your 164-foot superyacht? Especially with the simple, open-to-any-interpretation instructions: “Just go for it.”

Thunder happens. The jet-powered superyacht once packed 10,500 hp and could hit close to 50 mph. When Cavalli Visionnaire added a new interior, the go-fast yacht took on another persona.

The Cavalli team created an Alice in Wonderland effect, where every room teeters on the edge of fantasy. Walls and handrails are covered in dimpled stingray skin, toilets are wrapped in crocodile and alligator hides, and drawers are decorated with the epidermis of venomous cobras. Coverings that give new meaning to the word bespoke. There are dozens of less gruesome materials, stones, metals, ceramics and woods, used in what is one of the most richly detailed interiors in superyacht history.

Welcome to Wonderland: The bespoke interior is a wild collection of materials, shapes and patterns.  Courtesy IYC

Custom built in 1998 by the Australian yard Oceanfast, this sleek, rakish go-fast speed demon came from the drawing board of the godfather of modern yacht design, Jon Bannenberg.

“The original owner asked for only one thing; that was to make the boat fast enough to leave San Tropez after breakfast, anchor off Monaco for a leisurely lunch, and be in Portofino, Italy in time for dinner,” Thunder’s former captain, Maksym “Max” Burgazli told Robb Report during a recent tour of the superyacht.

That meant constructing the hull and superstructure out of lightweight, super-stiff carbon fiber, and installing a pair of thundering 2,950-horsepower MTU V16 diesels that channeled their combined 5,900-hp through KaMeWa water jets.

While 5,900 horses might sound plenty powerful, it wasn’t quite enough. So, the yacht was given a little extra thrust, courtesy of a 4600-hp Textron Lycoming gas turbine, to bring the tally up to a staggering 10,500 horsepower.

The result? During sea trials Thunder A, as the yacht was originally named, hit a sensational top speed of 49.4. mph.

To ensure it looked as fast as it went, Bannenberg designed a pair of humongous, military-style top-deck air intakes with huge rear-facing grilles. Plus, a pair of fighter-jet-style circular exhausts poking out of the stern.

The boat sported a jet turbine and cool exhaust on the stern in its quest to reach hyper speed. The turbine and five-ton gearbox were removed by the new owner since they were rarely used.  Courtesy IYC

After a few years of speedy cruising around the Mediterranean, Thunder A was acquired by controversial Russian oligarch and politician, Boris Berezovsky, who renamed it Thunder B. After he reportedly fell out with Russian president, Vladimir Putin following accusations of bank fraud, the yacht was seized in 2011 by French authorities at the request of the Russian government. The following year it was listed for sale at €5 million—roughly $7 million—and sold in 2013 to a Croatian buyer.

Three years later, it was in the dry-dock at the Lusben Shipyard in Viareggio, Italy getting that massive, hugely expensive refit.

You won’t see a landing like this on any other superyacht.  Courtesy IYC

How expensive? In addition to getting that polarizing Cavalli interior, the yacht’s hull was repainted with a top coat containing a reported $800,000 worth of genuine gold leaf, and edged with silver paint containing, you guessed it, real silver flakes.

“Everything about the refit was done with absolutely no concern for cost. Yes, some people might say the interior is overdone. But it is truly unique,” said Captain Burgazli.

Even before the refit, Thunder B had cruised through huge amounts of money. With Oceanfast’s parent company Austal being long-time specialists in building high-tech military vessels, many of the yacht’s original features were military grade. Like the torpedo-avoidance system.

Here, when Thunder is cruising at high speed, twin, stick-like levers by the helm can throw the yacht to full port or starboard in just three seconds, by redirecting the trio of water jets.

“One feature that is especially impressive, is the multi-fin stabilization system,” explained Captain Burgazli. “It was designed for military vessels to keep the deck perfectly level for launching missiles. Even in big seas, the boat will not roll. It means no one spills their drinks.”

During the tour, Captain Burgazli took us through the five, wildly decorated en-suite staterooms, including the full-beam main suite. He pointed out the acres of mirror-varnished inlaid rare woods, along with fixtures crafted from polished pewter and shiny chrome, and the funky-shaped, over-stuffed furniture in buttoned velour and silk.

Up on the forward deck, he showed-off the 21-foot long swimming pool that’s shaped like a boat. Before getting under way, the pool gets emptied and a hidden, foredeck-mounted crane drops the ship’s tender inside it.

For the latest chapter in the yacht’s colorful history, fast forward to earlier this year. After it was sold to a new buyer in 2019—and renamed Thunder, minus the B—it went into the Rybovich Shipyard in West Palm Beach, Florida for yet another makeover.

The Cavalli interior was largely left untouched, but the yacht’s exterior was completely repainted, replacing the pricy gold leaf and silver with bright, refrigerator white. Sadly, the trademark gas-turbine and its accompanying five-ton gearbox were jettisoned through lack of use, and those stern-mounted jet exhausts sealed.

The pilothouse and engine room have the most conventional yacht designs.  Courtesy IYC

“She’s now in amazing condition and ready for her next adventures,” says Mark Elliott, broker with IYC which has just listed Thunder for sale at $8.8 million.

Whether the new owner keeps the wonderland interior is anyone’s guess, but they will be buying a truly outside-the-box definition of bespoke.