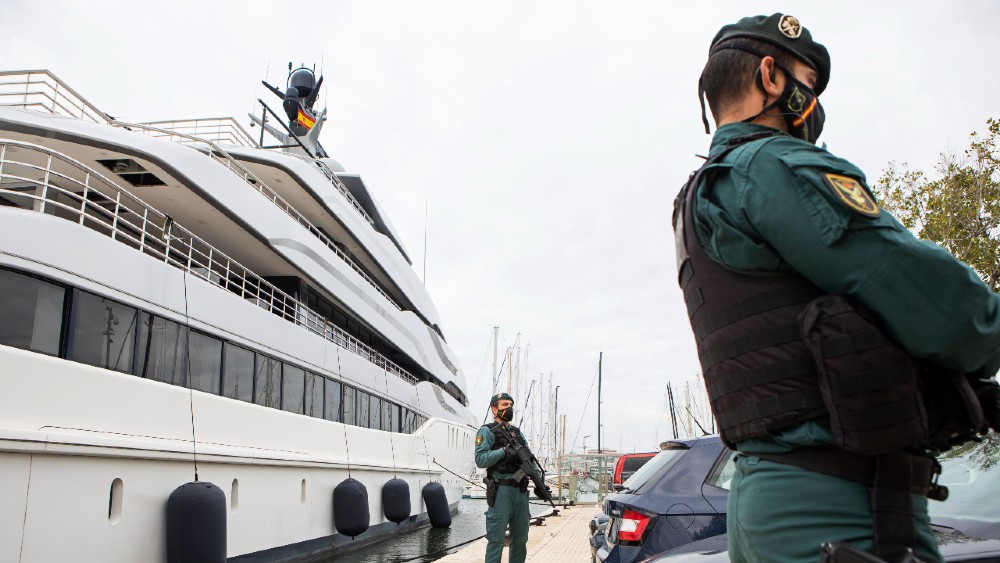 Six weeks after Russia invaded Ukraine, authorities are detaining more luxury yachts in global ports than ever. This week’s tally includes 12 vessels under construction in The Netherlands—the world’s foremost superyacht builder—and a $120 million yacht seized in Spanish waters on an FBI warrant.

The US Department of Justice worked with Spanish authorities to capture the 255-foot Tango, owned by Motiv Telecom founder Viktor Vekselberg. The US has joined a growing number of countries detaining superyachts suspected of belonging to businessmen connected to Vladimir Putin.

“Tango is not the first time the United States has ever asked a foreign government to assist in executing a warrant,” said Stefan Cassella, a lawyer who served as Chief of the Asset Forfeiture and Money Laundering Section in the US Attorney’s Office in Maryland. “But it does seem to be the first time it’s happened in the context of property belonging to a Russian oligarch who was evading sanctions.”

Yacht seizures have been targeting Russian President Vladimir Putin’s cronies, and Putin himself. It’s rumored that he owns the $700-million Scheherazade, which is being held by Italian authorities.  Courtesy AP/Sputnik

US Attorney General Merrick B. Garland said on Monday that Tango “will not be the last” yacht belonging to members of Putin’s inner circle to be confiscated.

Spain, Italy, France, Germany, Finland and The Netherlands have detained over the last month billions of dollars in vessels believed to be owned by sanctioned Russians. Last week, the UK government seized its first superyacht, the 192-foot, $45 million Phi in London’s Canary Wharf.

“The current situation is unprecedented,” Benjamin Maltby, partner at Keystone Law in the UK and an expert in yacht and luxury-asset law, told Robb Report.

The 433-foot Crescent was seized on March 17 by Spanish authorities.  Courtesy Sipa USA via AP

Most large yachts are registered by offshore corporations in island tax havens to obscure their ownership. “If the owner wants to make it difficult, then it can be very hard to trace,” Maltby said. Owners often use shareholders, directors and family members as proxies. The Phi, for example, is registered to a company based in the Caribbean but flies the Maltese flag.

The multinational effort to seize oligarch-owned yachts—which often come with swimming pools, helipads, and millions of dollars in annual maintenance fees—is expected to put economic pressure on Putin and his allies. Owning a superyacht, the ultimate status symbol, is practically a prerequisite for joining Russia’s oligarchy.

But there are multiple legal considerations. Freezing a yacht means that the owner can’t sell the ship or transfer ownership, or provide maintenance services. However, the sanctions don’t allow countries to take ownership of oligarch-owned yachts, giving rise to uncertainties over the fates of the superyachts accumulating in shipyards throughout Europe.

The seizure of Tango on Monday involved Spanish authorities working with FBI agents. The US seized the yacht after connecting it to Putin crony Viktor Vekselberg.  Courtesy AP/Francisco Ubilla

Maintaining a yacht is an expensive endeavor because it is continually exposed to the elements. “A vessel is treated very much like a person or corporation,” Michael Karcher, a maritime lawyer with Robert Allen Law in Miami, told Robb Report. “The boat can run up its own bills. Then, if the yacht is in someone’s boatyard, there’s the question of ‘Can we do any business with them?’”

The ripple effect extends to caterers, yacht brokers, mortgage and insurance companies, and dozens of other industries connected to the yacht’s operation and maintenance.

“When a yacht is seized while in a yard, the owner will remain liable for the maintenance costs,” Maltby said. “But if the owner is unable to pay, the yard is left in a difficult position.”

Equanimity was seized by Malaysia and sold off in 2019 for half of its value. But the yachting world has never seen anything like the mass seizures taking place with the Russian oligarchs.  Courtesy AP

The situation remains unclear for the shipyards and marinas docking the yachts.

Karcher said that he receives calls from shipyards each time the Treasury Department sends a new round of sanctioned names, asking whether they’ve dealt with anyone on the list. “Some are saying, ‘Hey, who is this guy.’ Then they realize there’s this boat taking up a few hundred feet of dock space. ‘Who’s going to pay for it?’”

The answer may vary by jurisdiction.

Roman Abramovich, who was in Turkey earlier this week to observe the peace talks between Russia and Ukraine. His $600 million Solaris set sail from Istanbul for international waters this week, while his other yacht Eclipse remains in that country. Turkey, the United Arab Emirates and the Maldives are not seizing the Russian oligarchs’ yachts, so many targeted vessels have moved into those waters.  Courtesy AP

The British government has said that Phi’s owner will be held responsible for all maintenance costs while the boat is ordered to remain at Canary Wharf in London’s docklands. One legal expert said Spanish authorities are likely to maintain Tango while in their custody.

But at most marinas, “yard invoices are indeed just stacking up—unpaid and un-payable,” Maltby said. “Yet the judicial mechanisms for liquidation remain in place. Will we see some bargains coming onto the market in the summer months?”

Many analysts expect protracted lawsuits. “The United States and Western countries have considerable authority to seize property, but less authority to keep it,” wrote Jonathan Turley in USA Today. “The reason is that, unlike Russia, these countries are bound by property rights and rules of due process.”

Lady M was seized by Italian tax authorities on March 5. Owner Alexei Mordashov is on the sanctions list.  Courtesy AP

To take ownership of an oligarch’s yacht, governments have to show that the property was part of a crime. Turley wrote that it may be challenging for prosecutors to prove that the yachts are the result of “proceeds of illegal activity” rather than purchased via legitimate business channels. The seizures could take years in the courts to sort out.

For the moment, the yacht confiscations and freezing of assets seem to be accelerating. The list of detained superyachts include the $580 million Sailing Yacht A owned by coal and fertilizer magnet Andrey Melnichenko; the $153 million Valerie belonging to Sergei Chemezov, CEO of Russian state-owned defense conglomerate Rostec; and the $120 million Amore Vero linked to Russian oligarch Igor Sechin.

Others are under the watchful eye of the US, UK, and EU, as well as amateurs watching VesselFinder, MarineTraffic, and other location-monitoring apps.

On Monday, Russian billionaire Roman Abramovich moved his $600 million Solaris from a Turkish port and into international waters. His $1.5 billion Eclipse, one of the world’s longest and most expensive superyachts, remains docked off the coast of Turkey. Abramovich is believed to own several other yachts as well.

Meanwhile, police in Italy are investigating the Scheherazade, a 460-foot superyacht thought to belong to Vladimir Putin that remains docked at a Tuscan resort.

No yachts have been seized in US waters, but the Biden administration has taken aggressive measures to punish Russians who have benefitted from “ill-begotten gains,” as President Joe Biden said in his State of the Union address last month.

Seizing a yacht is easy, selling it is much more complicated. Analysts expect many legal battles over the yachts.  Courtesy AP

Authorities say many yachts remain in international waters or docked in countries that have not imposed sanctions, such as the United Arab Emirates, Turkey and the Maldives.

That island nation is said to have a half-dozen Russian-owned superyachts in its waters, including Andrey Melnichenko’s 390-foot Motor Yacht A. The country’s chief prosecutor, Hussain Shameem, told Reuters that the idea of confiscating a Russian superyacht was “far-fetched” because of the country’s rudimentary legal system and lack of a military.

Congress is considering a bi-partisan bill called “Yachts for Ukraine” that would allow authorities to seize Russian-owned assets of $5 million or more. The bill permits the government to sell the assets and send the cash to aid humanitarian and reconstruction efforts in Ukraine. The Department of Justice also announced a $5 million reward for tips leading to yacht owners on the sanctions list, but so far has not disbursed any reward money.