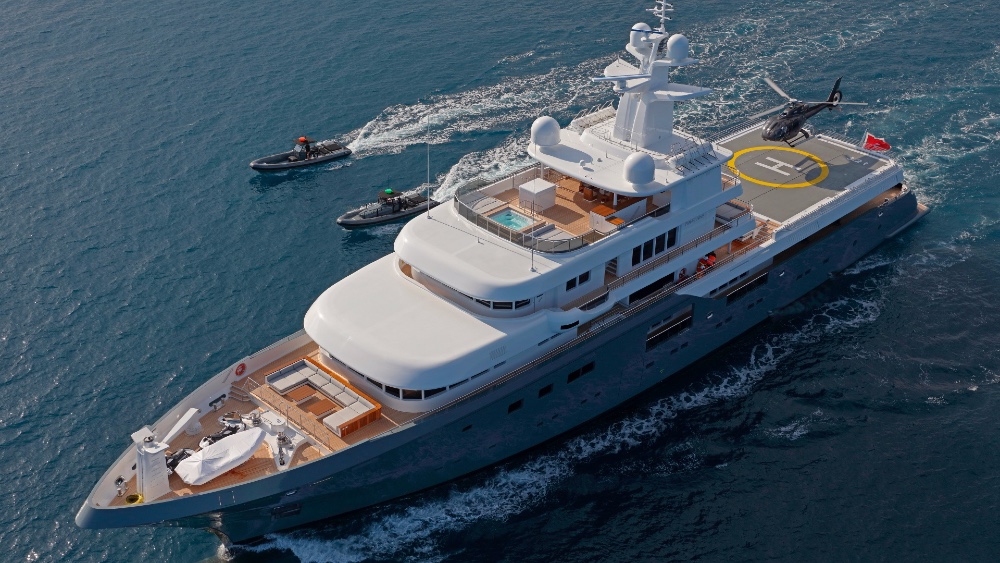 With a production budget reportedly in excess of $200 million, Nolan didn’t hold back when it came to picking the coolest “props” for his sci-fi thriller. The coolest of them all? Without doubt, the spectacular 240-foot superyacht Planet Nine, which doubled as the lair of Tenet’s Russian baddie, Andrei Sator, played so despicably well by Kenneth Branagh.

Built by the Italian yard Admiral Yachts in 2018, the world-girding, high-luxury ice-breaker is currently on the market through Fraser Yachts for a jaw-dropping $100 million. She’s also available for charter at up to $850,000 a week. Plus expenses, of course.

The 240-foot Admiral superyacht and the stylish 33-fooot Riva Aquariva not only gave the movie a backdrop but plenty of waterborne action.  Warner Bros.

The yacht scenes take place with Planet Nine anchored off Ravello on the azure-blue waters of Italy’s picturesque Amalfi Coast. Describing Planet Nine in the in-depth Tenet production notes supplied to Robb Report by Warner Bros. Pictures, Branagh says: “So this boat—its military nature, its color, its angularity—takes you inside the mind of Andrei Sator, projecting an image that is sinister and threatening,”

Yet Nathan Crowley, the movie’s production designer, felt the yacht’s rugged lines weren’t quite sinister enough: “We added a rocket launcher on the back to feed into that semi-military look that says ‘Don’t come near this yacht.’”

Working with a $100 million superyacht—its owner is said to be billionaire Nathaniel Rothschild, 49, of the Rothschild banking family—also posed a few serious headaches for Crowley and his team. “When you rent a giant superyacht, you try not to do any damage. So when the crew came onboard carrying all that equipment, it was important that anything that could get chipped was protected,” Crowley said.

The 50-foot sailing cat in the movie was so fast that the director had to use a helicopter to shoot the racing sequences. One of the actors called the ride “exhilarating but quite terrifying.”  Warner Bros.

In fact, four members of the film crew were assigned to do nothing but safeguard the yacht from any dings and dents. And when interior furniture had to be moved around, the job was assigned to Planet Nine‘s crew.

One other headache for Crowley turned out to be the yacht’s helipad. While its 10-ton capacity was enough to support the boat’s current chopper, an MD Explorer 902, it wasn’t enough to withstand the huge weight of Sator’s Russian-made Mil mi-8 twin-turbine helicopter.

“We had to figure out how to complete the helicopter sequence without it actually touching down,” says executive producer Thomas Hayslip. “Thankfully we were able to find a great crew out of Eastern Europe that does search and rescue. They brought the helicopter in and just barely hovered, so it looks like the wheels are on the yacht. They weren’t. It was basically the thickness of a piece of paper, they were that precise.”

For boat lovers, there’s one scene guaranteed to set hearts racing. In it, lead character—who is simply called The Protagonist, and played by John David Washington—speeds out to Planet Nine behind the wheel of a gorgeous Riva 33 Aquariva Super launch to confront the villains.

But for arguably the film’s most breathtaking maritime action, Nolan and his crew moved to Southampton on England’s south coast. There, bad-guy Sator gets his on-screen kicks match-sailing his two, state-of-the-art F50 foiling catamarans. The cats are fast and furious. For the sailing scenes, Tenet’s marine coordinator Neil Andrea—he’s famous for pulling together the boats for Nolan’s WWII epic, Dunkirk—approached the UK-based SailGP team which oversees F50 racing. They provided the two catamarans and the skippers for filming.

One problem they faced? With top speeds of over 58 mph, the America’s Cup-style cats were way too fast for the camera boat to keep up. The film crew had to switch to a helicopter.

“Planet Nine” was designed to look like a rough-and-ready military vessel, but the movie’s producers assigned four crew to make sure that nothing was damaged during filming.  Fraser Yachts

Andrei Sator’s wife in the film, played by towering Australian actor Elizabeth Debicki, described her first time in the F50. “When three of us were hanging on the side and the boat lifted out of the water, I’ve never felt anything like it,” she said. “It was exhilarating, but quite terrifying.”

To see the trailer for Tenet, which was released on Sept. 3, click here.