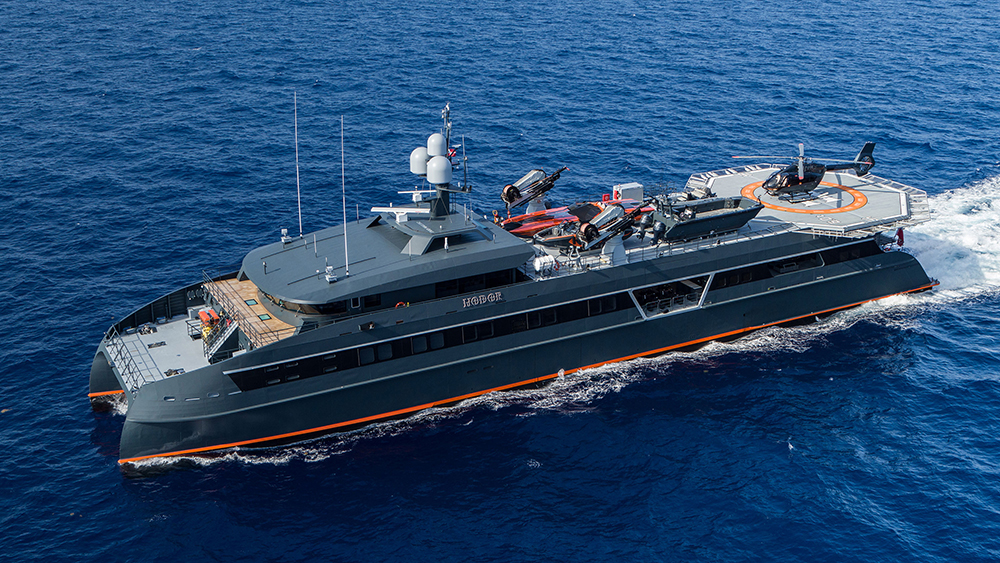 It’s not just superyachts that make the marine world big business. The market is currently awash with newly launched shadow vessels or tenders, and some of them, such as Incat Crowther’s Shadow Cat Hodor, can almost claim superyacht status on their own.

But does anyone actually need a support vessel on this scale? “At first glance it may seem an extravagance, just a trend, but it responds to a real need for owners of fantastic yachts,” says Filippo Rossi, sales and marketing manager at Lynx Yachts, which considers its YXT series a “yacht extender” solution. Rossi identifies three types of buyers: the owner of a 98-foot boat who wants to carry more gear; one who has a 160-foot vessel and needs another tender and storage; and the owner of a 230-foot craft who would like a helipad but doesn’t want to change up the mother ship.

Hodor, however, addresses all three of Rossi’s types. It was customized for the sole purpose of enhancing the original yacht’s capabilities and includes a 56-foot tender (yes, yet another boat), Jet Skis, quad bikes, a submarine garage, a helipad and a hospital with a decompression chamber for divers.

Designer Cor D. Rover, who has collaborated with Alia Yachts to build a 118-foot buddy boat to Royal Huisman’s 180-foot Project Phi, says that the real estate volume on a superyacht is “extremely valuable,” but he believes the biggest advantage is the saving of time. When the main yacht leaves for a new anchorage, the support boat’s crew collect, hoist and seafast all recreational equipment. “Because the shadow vessel is faster than the mother ship, it will arrive first and deploy the toys before the guests arrive. Holidays have never been more efficient!” Rover says. “But I have to admit,” he adds, “if I tell this to my non-yachtie friends, they think it’s a bit extravagant.”