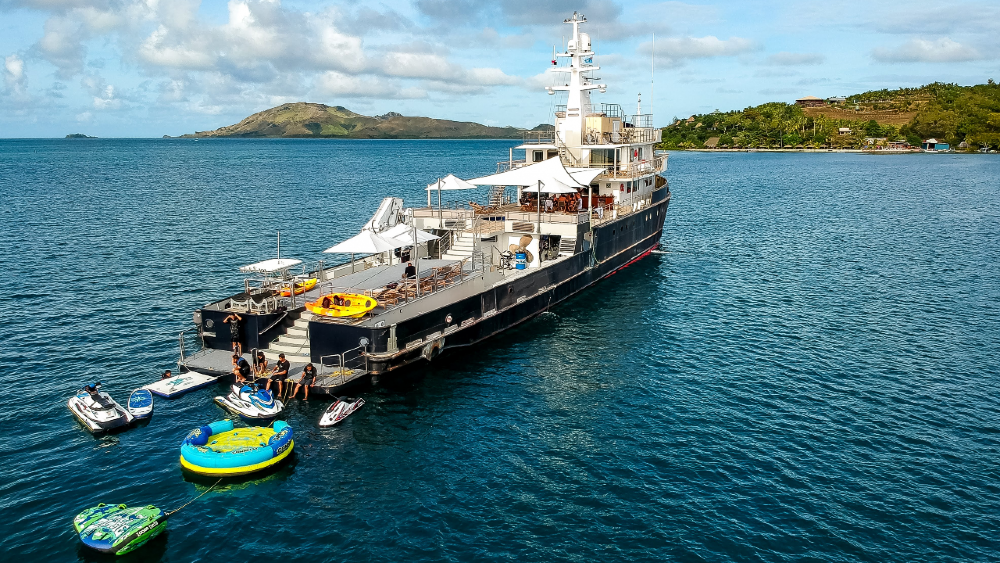 Talk about designing twin passions for outdoors and fitness into your yacht. Latitude’s recent two-year refit is nothing short of a rebirth for this former long-range supply vessel. Featuring more deck space than yachts twice her size, and one of the only yachts in the world to have a dedicated two-tier yoga deck, the 179-footer is now cruising Tahiti and the South Pacific.

Built in 1973 by German shipyard Hitzler Schiffswerft as an ice-class supply boat, Latitude was converted into an explorer yacht in 2003, designed for longer trips with a range of up to 10,000 miles. When the current owner bought Latitude in Colombia in 2018, it marked the start of a new chapter in both their lives.

“Before purchasing Latitude, the owner came onboard and spoke with every crew member, just to make sure the ship had a ‘soul,'” Captain Samuel Alquilos told Robb Report. “He believed that having the right crew was key to providing the best onboard experience.”

The vast open deck layout allows the owner to reconfigure the exterior many ways, depending on the social occasion.  Courtesy Burgess Yachts

Having previously chartered yachts, but also leaning on his experience from years spent in container shipping, the owner’s vision for Latitude was clear. “He wanted to give his family and guests a taste of a classic bygone era with personalized, unique experiences in the South Pacific,” says Alquilos.

The refit gave life to this dream, as well as facilitating the owner’s personal love of jet-skiing, wakeboarding and fishing. “The deck space is perfect for housing multiple tenders and accessing water toys, while the addition of a swim platform caters for family swimming,” says Alquilos, who understands the operational needs of the yacht very well, since he joined Latitude’s crew in 2004.

Alquilos managed the 24-month refit and re-designed the mast, yoga deck (with room for eight practitioners) and modernized the flybridge navigational equipment. A heli/tender deck also suits aerobics classes, which can then be followed by a trip to the main deck sauna.

A fitness fanatic, the owner had these two decks designed as a yoga area overlooking the water, while the heli-deck is used for aerobics classes.  Courtesy Burgess Yachts

A complete redesign and refit of the interior were also vital elements to Latitude’s transformation, essential in delivering the level of comfort that the owner wanted to achieve. The polished wood framing and flooring on the bridge was restored to its original grandeur. The “Great Room” on the foredeck is where breakfast is served. But it’s the pool deck seating that has become the hub of the yacht, where family and friends gather for meals and drinks while children play in the large aft deck pool.

“The work undertaken in the bar and lounge area were key features for the owner,” says Alquilos. “He is action-sport orientated, so spending the day on the water with his kids, before relaxing in comfort by the bar with friends and family, were important requirements.”

Now based in Tahiti, Latitude is set up for charter with Burgess around French Polynesia and the South Pacific. “I think the remote atolls of Tahiti are winners for most people,” says Alquilos. “They provide privacy and make guests feel like they have their own island.” Alquilos cites open-sea shark diving in Fiji as a top alternative.

The owner wanted the bar area to be a bright, open social area where family and friends could congregate after a day on the water.  Courtesy Burgess Yachts

“Before the refit, Latitude was ideal for fishing trips and enjoying laid back adventure on the ocean,” says Alquilos. “The addition of the yoga deck, the central staircase and the swimming platform have totally changed the look and feel of the boat. Everything is more user friendly, with a nice flow.”