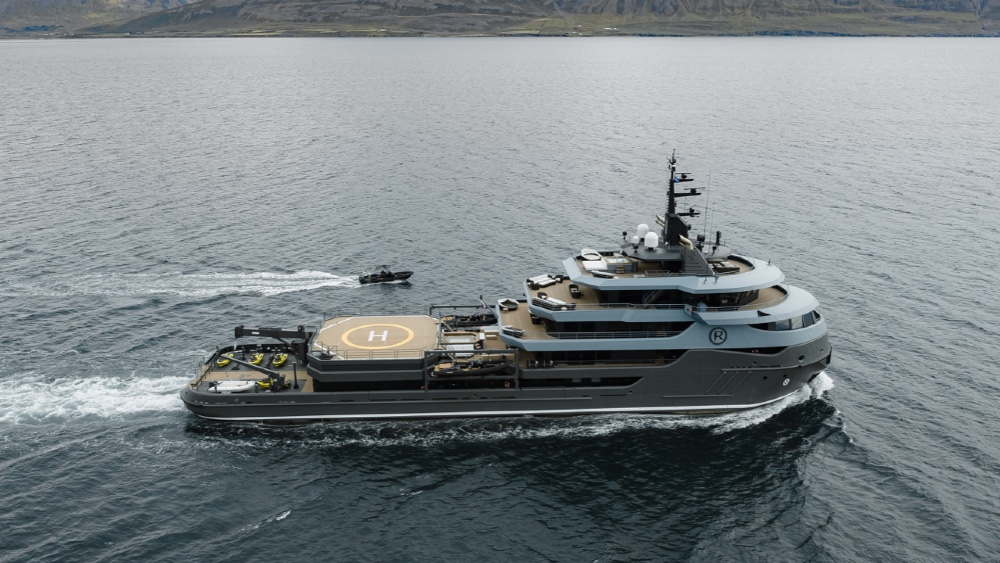 Three years ago, a hulking supply vessel that had worked the oil fields in Kazakhstan was looking for an owner. The 223-footer, with its bare decks and industrial look, seemed an unlikely candidate to become an expedition superyacht. Sanaborg had been lying around Harlingen harbor in the Netherlands for years, with no future prospects.

Visiting the yard at ICON Yachts, Sanaborg‘s future owner was able to see her potential. The vessel had many things going for her: She only had about 5,000 nautical miles under her hull and she had been built at a reliable Dutch shipyard, so ICON knew her pedigree. Sanaborg also had the highest-rated Polar-class hull, so she could travel anywhere in the world. “The vessel was designed to be self-supporting, so she can be repaired by her crew in the most remote areas,” says Leon de Haas, ICON’s project manager. “That contrasts with most pleasure yachts that cruise the Mediterranean, where all you have to do is click your fingers and a maintenance team shows up from shore.”

The stylized wooden interior was designed to have a castle-like feel.  Burgess Yachts

Self-sufficiency was important to the owner, as was time. He didn’t want to wait four years for a new custom build. “He wanted a yacht that could travel to the most remote areas of the Arctic with enough fuel and provisions for weeks,” says de Haas. “And he wanted it as soon as possible.”

What the owner got, after a 22-month conversion at ICON, was Ragnar. Named after a former Viking king, the former supply vessel is now the crown jewel of world explorers. The yacht has all the luxuries of any other contemporary superyacht, but with a stylized interior by U.K.-based RWD that de Haas describes as “medieval.” It’s probably better defined as modern eclectic, reminiscent of a castle that reflects the owner’s vision in every detail.

The main salon is cloaked in dark wainscot, with wooden floors and ceilings, and the same applies to the formal dining room with its giant, 14-seat dining table that would look at home in a Viking banquet hall. Inside a glass case is a life-size replica of Ragnar, holding his sword. There is a fireplace and bookshelves in the library of the sky lounge, as well as oversized leather lounges and chairs, and wine racks behind the wooden bar in the rich, dark, pub-like lounge.

The yacht has accommodations for 12 guests, including two master suites on the upper deck—with four-poster beds, naturally—four guest suites on the main deck, and a twin stateroom that converts to an office.

Other areas look like any contemporary superyacht, such as the large, bright gym, treatment rooms in the spa, and pool and lounges on the open upper deck. “I love the observation lounge in the yacht’s forward section, with the full-width windows,” says de Haas. “I fully experienced the possibilities of that area when we did the sea trials. I can only imagine what it would be like traveling into areas of the Arctic with that awesome view.”

The owner’s plans obviously include polar travel. Ragnar has an Airbus EC145 helicopter (and helipad) that can drop guests on a snowy glacier for heli-skiing, a three-person submersible for adventures in Arctic waters and snowmobiles and all-terrain vehicles for exploration on land. The yacht is one of the first to be rated as Ice Class 1A Super, which means it can operate in temperatures as low as -31 degrees Fahrenheit at a speed of four knots, in ice that is 20 inches thick. Ragnar’s engines and electric pods are designed to churn ice as it navigates ice channels. Her range is well beyond 6,000 nautical miles. Among the world of explorers, Ragnar is king.

As a former supply vessel, the rear area is purely utilitarian, ideal for an expedition vessel.  Burgess Yachts

The beast-to-beauty conversion process was not an easy one. ICON had to do extensive modifications to the on-board power systems, including adding generators for the extra power demand the owners, guests and the crew would have on the vessel. “The complex power-management system had to be completely rearranged,” says de Haas. “We also had to modify many other systems from Ragnar‘s bridge to her stern. This level of complexity is completely different than building a new vessel.”

The next stage involved transforming a utilitarian support vessel into the owner’s dream boat. The team extended the superstructure over the boat’s former working decks to make space for the luxurious interior. “In one case, we took out an outer wall to create the observation deck,” says de Haas. “We’d done new builds and refits, but this project was much more complicated. In the end, there were only a few surfaces that are recognizable as being original. Otherwise, everything else is new. Our company is very proud of what we achieved.”

Ragnar can also be experienced by outsiders. She is available for charter through Burgess Yachts for $525,000 per week, in the Mediterranean in September and the Caribbean and Bahamas in the winter. No word yet on when she will do her ultimate Viking voyage to the polar regions.

Check out more images of this unique explorer yacht below: