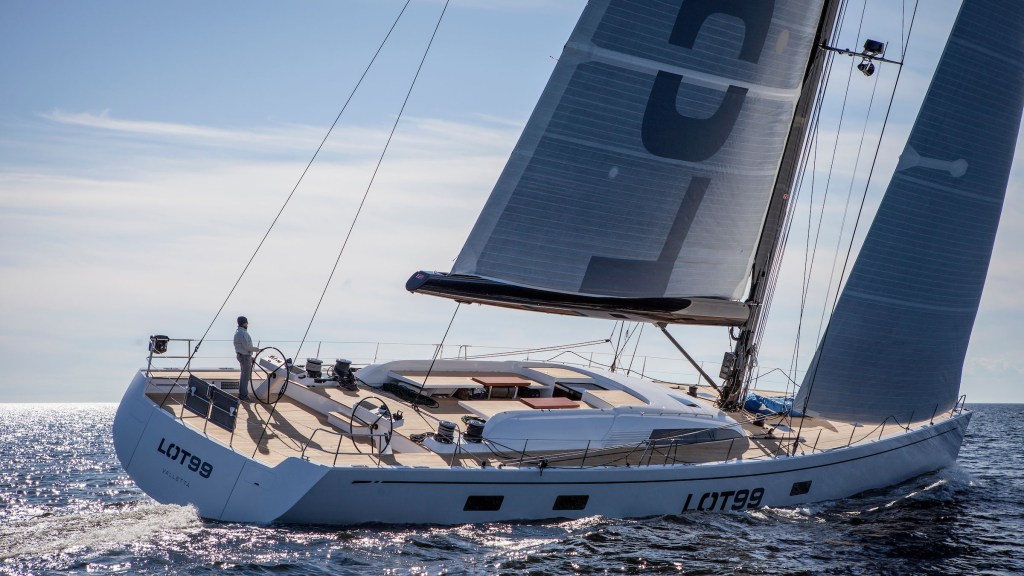 The first 95 model sailing yacht from Nautor’s Swan, named Lot99, has the same classic, elegant lines as most of the German Frers designs that have defined the Swan family since 1984. It also shares the original vision of Pekka Koskenkyla, who launched the brand in 1966 in Pietarsaari, Finland. Koskenkyla wanted to create sailboats that were beautifully crafted, while allowing owners full contact with nature and the surrounding water, whether it was racing or cruising.

Lot99 fulfills those missions equally well. The yacht has twin rudders for enhanced maneuverability, along with a lifting keel for deep-sea voyaging or entering shallow harbors. In the up position, the draft is 11 feet, while fully deployed, it drops to 18 feet. This high-aspect-ratio keel, when paired with a lighter ballast bulb, bowsprit, and square-top fractional rig, makes an awesome Maxi racing sailboat. If rigged with a traditional triangular mainsail and permanent backstay, the sailing yacht makes an equally awesome cruiser.

Lot99’s owners are veteran sailors who plan to use the yacht mainly for cruising. They worked closely with Nautor’s design team to ensure they got their dream boat, down to wood choices, fabrics, and tiny details. They wanted a boat that strikes a balance between modern and timeless, landing in the sweet spot where the Finnish builder has built its reputation. The semi-raised saloon not only delivers the right headroom, but allows exceptional ocean views from the interior. The owner’s stateroom is at the stern of the boat, where the beam is widest, while two other double guest rooms, each with its own en-suite bathroom, are positioned amidships. There are also two crew cabins. Nautor’s Swan is known for near-flawless joinery and highly meticulous attention to detail. The owners of Lot99 were not disappointed.

Beyond the yacht’s interior beauty, build quality is state of the art. Both hull and deck were built with full carbon-sandwich construction for maximum stiffness and minimal weight, using the same materials on the most advanced raceboats. Ultimately, the owners wanted a comfortable, beautiful home that was also seaworthy. Lot99 met those criteria and more. The yacht will appear at both the Cannes Yachting Festival and Monaco Yacht Show in September.