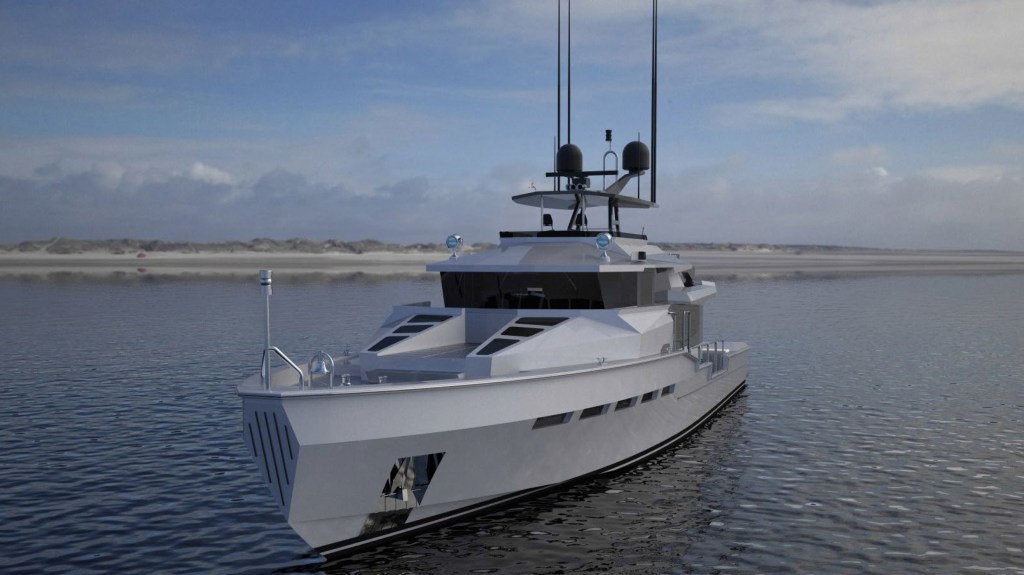 Military-looking yachts make up a small but popular niche, with recent launches like the 64-foot Baglietto MV19 and the 180-foot Atlante by CRN as great examples of the ability to combine a stealth exterior with a luxurious interior. Tactical Custom Boats of Richmond, British Columbia, is entering this exclusive navy with its new Tactical 77 high-performance yacht. The fast, pilothouse motor yacht is built with an aluminum hull and superstructure, and with carbon-fiber internal construction to maintain a low weight for fast speeds.

The Canadian shipyard collaborated with U.S. yacht designer Bill Prince to create the 77, with a phantom-looking hull that includes bells and whistles like gyro stabilizers, suspension seating, advanced electronics, and an articulating transom that lets the captain launch tenders, jet skis, and other water toys without a davit. Prince designed the 77-foot yacht for a North American client who could wanted a military look, but couldn’t find it anywhere else. “We have designed go-anywhere capability and luxurious accommodations inside aggressive, pseudo-military exterior styling,” says Prince.

Military on the outside; sleek contemporary on the inside.  Photo: Courtesy Tactical Custom Boats

The 77 has a “classified” top speed, but its fast powerplants will be a pair of 627 hp Seven Marine gas engines. The 77 will have three joystick controls across the yacht for easy maneuvering, a Seakeeper 5 stabilizing system, and a motorized sunroof and cockpit awning. The interior, Prince says, will have “superyacht-quality” fit and finish. Tactical Custom Boats is a brand owned by Crescent Custom Yachts, which has a deep pool of talented engineers, naval architects, and other skilled workers. Its most recent launch, the 145-foot Mucho Mas, had one of the most impressive interiors at last year’s Fort Lauderdale International Boat Show. The Tactical 77 is expected to undergo sea trials in 2019.