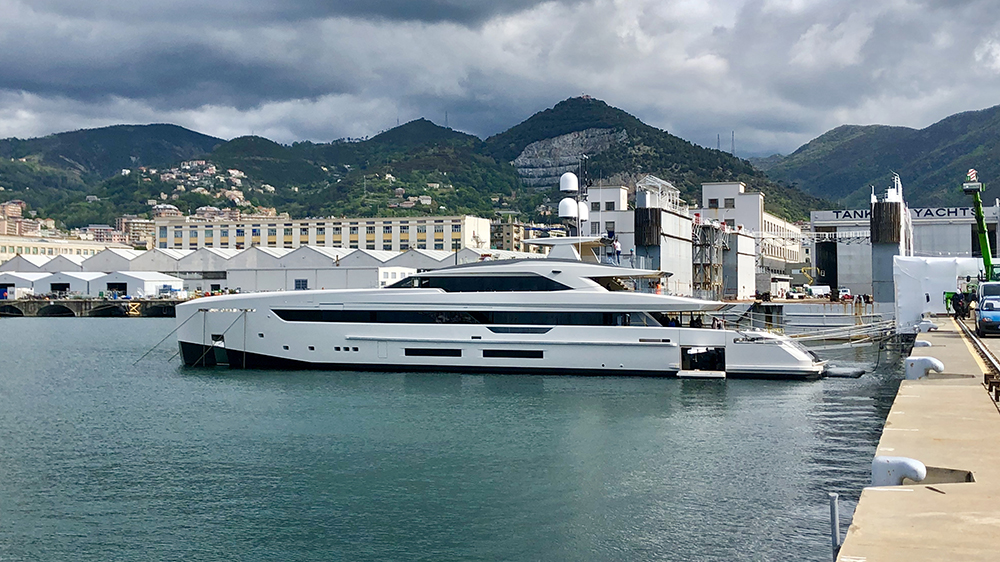 This week Genoa, Italy-based Tankoa Yachts launched the second hull of its 164-foot S501 Hybrid superyachts, the first being Vertige, delivered in 2017. Hull No. 2 stands out from Vertige by way of its hybrid propulsion package; five staterooms with the owner’s suite on the main deck and four guest cabins down below; a main-deck galley instead of housing the kitchen on the lower deck; a touch-and-go helipad on the foredeck; and the owner helped develop this project.

Diesel-electric mode kicks the two generators into gear, providing juice to the electric motors. This gives the yacht a top speed of 10.5 knots and a range of 4,900 nm and saves all kinds of fuel and keeps noise levels low.

The yacht’s hybrid mode utilizes one of the two main MTU engines to give one of the two electric motors the electricity it needs for propulsion and onboard power needs. This mode gives the yacht a 4,000 nm range while cruising at 12 knots with the two diesel generators not in use.

Traditional mode gives this yacht a 16.5-knot maximum speed by way of two main diesel engines for propulsion and a diesel generator for the onboard needs.

Full-speed mode kicks it all into gear: two main engines, two generators and the two electric motors all providing propulsion and onboard electricity needs. A top speed of more than 18 knots is the result with this setup.

On the main deck guests will find the main saloon, dining area and kitchen, as well as the master stateroom with fold-down terrace. A huge sun bed, U-shaped sofa, coffee tables and bar take over the aft cockpit.

Office and lounge areas of the owner’s suite.  Photo: Courtesy of Tankoa

Relax on the upper deck in the skylounge or the foredeck solarium and private open-air lounge.

Sofas, sun beds, adjustable tables, bar and a large hot tub make the sky deck the place for sun worshippers to do their thing.

The yacht will undergo intensive sea trials and be delivered to its European owner in time for the summer season. Watch for the official world debut at the 2019 Monaco Yacht Show (September 25-28).