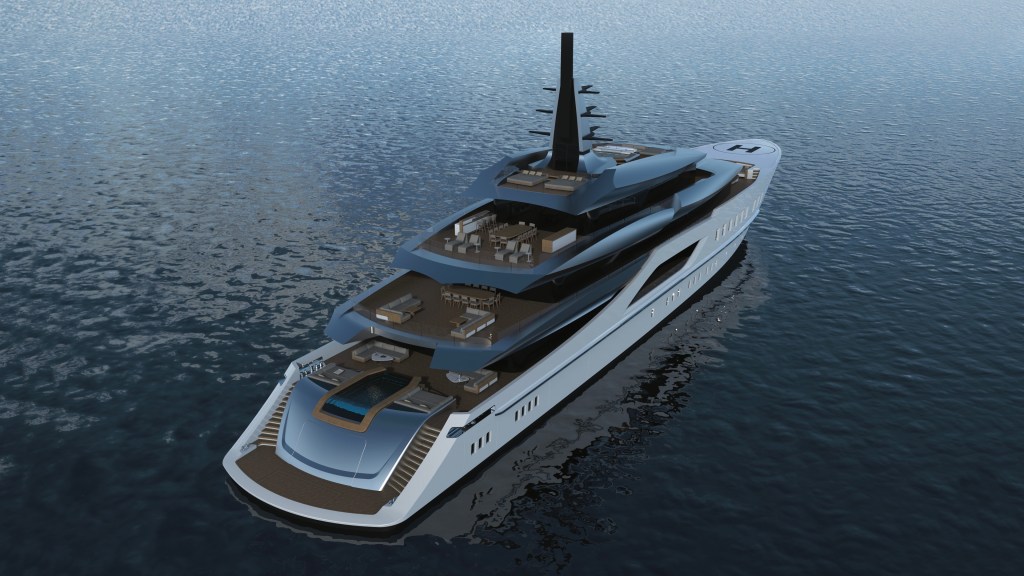 In 1962, the USS Independence, a newly launched aircraft carrier patrolling the Mediterranean, sent a signal to a 331-foot sailing ship with unusually high masts. “Who are you?” The tall ship answered: “School ship Amerigo Vespucci, Italian Navy.” The American ship responded: “You are the most beautiful ship in the world.”

Designer Francesco Paszkowski held the same high regard of the Italian Navy’s training sailing yacht, built in Italy in the 1930s, using it as inspiration for his design of the Tankoa S801, which is nearly completed. The 262-footer will not only be the largest yacht the Italian yard has ever built, but arguably its most graceful. Its superstructure is comprised of gold-colored decks that look free-floating from a distance, with a spiked radar that is a stylized interpretation of a sailing mast. The boat’s hull design will serve as the platform for larger vessels up to 289 feet in Tankoa’s Megayacht series.

Like its sisterships, the recently launched Vertige and soon-to-be launched 230-foot S701, the S801 stands out for its creative use of space. The first section of the interior on the main deck will be an open plan, making full use of the yacht’s 44-foot beam. This deck will feature a generous saloon, along with five VIP staterooms forward, all with en-suite bathrooms, located forward to optimize acoustics. The owner’s apartment is located on the upper deck, and includes a master stateroom with two walk-in closets and an enormous bathroom, along with a massage area, sauna, and personal studio.

Paszkowski’s design looks much lighter than other superyachts its size, and in some ways, it is. The high-tensile steel hull is mated to a superstructure of aluminum and other lightweight alloys. Like Tankoa’s other yachts, the S801 has become one of the most innovative yachts in its class, not only in the aesthetics, but also the engineering and onboard systems. Tankoa says the yacht is entering its final stages.

“The plan for this yacht was to introduce a different approach to the market,” says Tankoa’s Michel Karsenti. “We’ve recently seen a number of yacht designs that followed popular trends, only to look obsolete after just a couple of years. But this project is different. Our aim is to create something radically new based on elegant design language of a classic sailing ship.” The result, says Karsenti, will be forward-looking but timeless.

S801 is being built to Lloyd’s class and MCA standards, with twin Caterpillar 3516 diesel engines. The yacht is expected to have a top speed of 16 knots, with a range of 6,000 nautical miles at 12.5 knots.