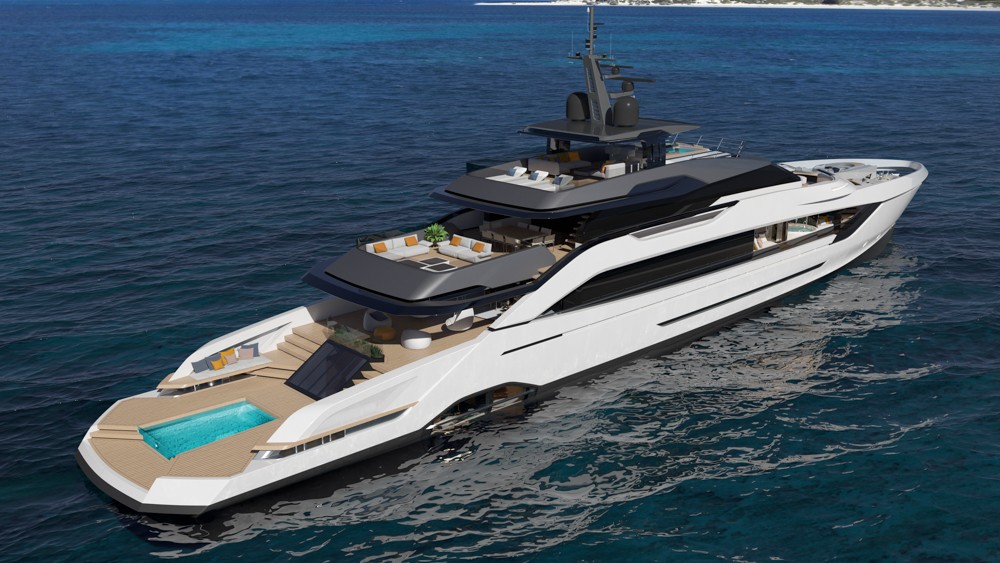 Bucking the current trend of making the interiors of new designs as large as possible, Tankoa on Friday introduced its Sportiva line. The Genoa-based shipyard has always been something of an outlier among Italy’s leading shipyards, introducing yachts that are in tune with popular designs, but Tankoa usually introduces an innovative twist. The sleek look of its new 165-foot Sportiva 55M sits in direct contrast to recent launches from other brands with supersized interiors that can make their exteriors appear bulky or bloated.

“Functionality is very important for a yacht,” said Vincenzo Poerio, Tankoa CEO, in response to a question from Robb Report about the Sportiva’s design. “But in addition to that, we never forget that a yacht should be beautiful. It’s in Tankoa’s DNA.”

Beyond the sleek look are fresh design features, like a large open transom and a window designed into the waterline at the beach club. “This not only allows much more natural light across the beach club’s interior, but also provides a direct view under the ocean’s surface,” says designer Luca Dini. “It’s been proven on other yachts like Serene, where bottom pieces are made of glass.”

The large, open transom is following a current trend in superyacht design, but the beach club window at the waterline is the first of its kind.  Courtesy Tankoa Yachts

The new line of Tankoas, including a smaller 147-footer and the flagship 213-footer, also has some larger, big-picture design features. The tender and Jet Ski will move to the bow area to free up the interior space typically devoted to the tender garage. That not only expands the beach club, but upsizes the five guests suites on the lower deck, while increasing storage space.

The design also includes a large owner’s suite on the main deck, with a separate private stairway to a private deck. The suite also has an interior Jacuzzi with a sliding partition that allows the owners to enjoy it alone, or it swivels around to become a group hot tub. The sweeping windows are also polarized, so they can become clear or tinted with the push of a button.

One trend that Tankoa is following is maximizing the yacht’s exterior space. This creates a kind of hybrid interior/exterior that lets guests to move freely between inside and out using not only the large swim platform, but also a large dining area, and the internal beach club.

The side window may seem oddly placed, but it offers an unusual window to the sea that many Tankoa owners have requested.  Courtesy Tankoa Yachts

Dini calls this design a “bridge” between conventional motoryachts and open superyachts. “The stern area allows you to live aboard the boat in multiple new ways,” he says. Those ways include the 13- x 22-foot transom pool (with a bottom that raises to turn it into a flat deck), glass doors to the beach club, and side arches that provide some privacy from the sides but add to the open look. The area measures an impressive 1,600 square feet.

Two other water features define the yacht, including a rectangular pool on the upper sundeck and the Jacuzzi in the owner’s suite.

Tankoa will be building a prototype over the next 2.5 years. The boat has a top end of 16.5 knots, with a friendly cruise of 15.5 knots. At 12 knots, it has a range of 4,000 nautical miles, giving it transatlantic potential.

The unusual sliding glass panel allows the owners to use the Jacuzzi either in the privacy of their own suite, or they can open it as a social area.  Courtesy Tankoa Yachts

While performance is in line with other yachts its size, the 165-ft. Sportiva will look much faster than its contemporaries from other yards.

“Some owners like big cars and SUVs,” says Dini. “I didn’t want to design one of those. I wanted something like a Lamborghini, with sleek, elegant and sporty lines. I wanted to create a yacht that other boat owners would envy.”