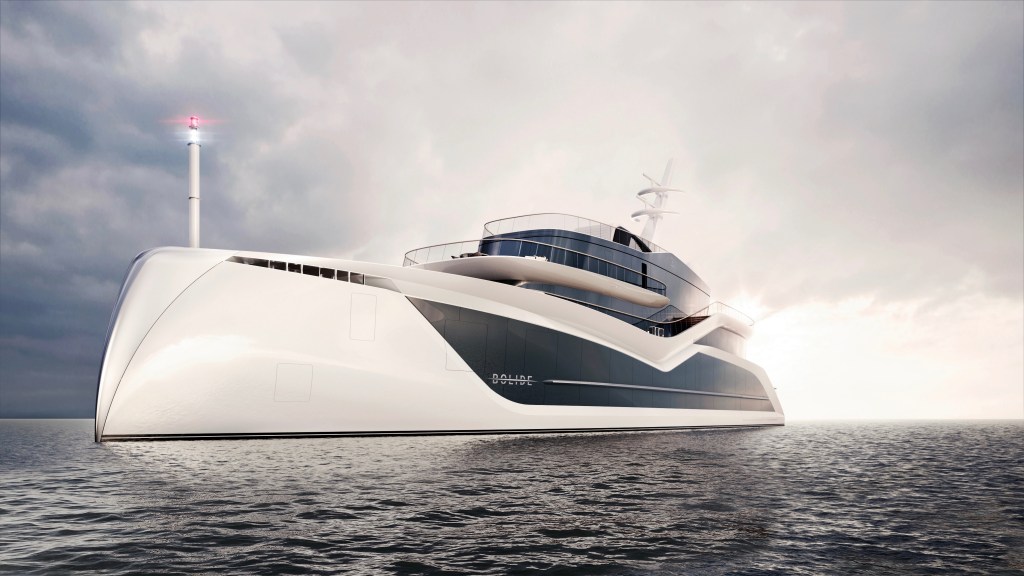 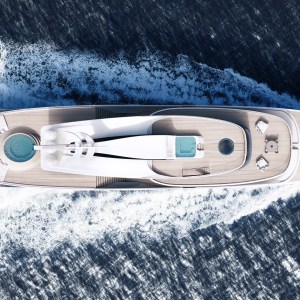 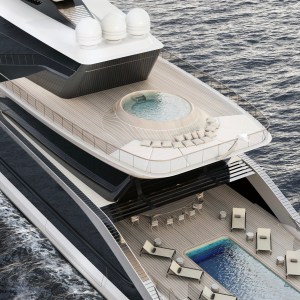 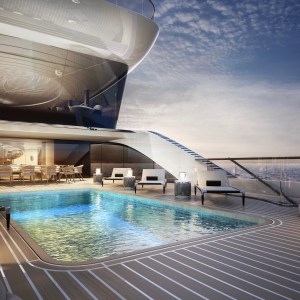 Depending on its specific usage, the Italian word “bolide” could have several meanings, including racecar, exploding meteor, and bat out of hell. Tankoa’s Project Bolide could be all three. The 233-foot yacht was one of the most exciting concepts unveiled at last week’s Monaco Yacht Show.  The Fabio Mazzeo design is intended to turn traditional superyacht design on its head, with features like 5,400 square feet of glass and an aft saloon that sits over the stern so it seems like you are looking over a cliff into the ocean.

Mazzeo is lead designer for Exclusiva, one of Italy’s most highly regarded interior design firms. Its noteworthy projects have included residences on private islands in Doha, the offices for Gazprom in Saint Petersburg, Russia, and airport passenger terminals. Beyond design, Exclusiva has a small custom manufacturing arm that creates much of the bespoke furniture and artwork for its interior designs.

Exclusiva, in fact, took the lead on Project Bolide and recruited Tankoa after a year of researching the superyacht sector. Mazzeo and his team wanted to create a superyacht that the yacht world has never seen before. “We planned to go well beyond the traditional concept of a yacht, while maintaining the tailor-made quality that Exclusiva is known for,” said Mazzeo. “At the same time, we wanted to ensure that our design had the technical features needed to succeed as a superyacht.”

The design team used the ascending lines of a classic sports car as a rough guide for the exterior profile. While that helped steer the initial concept, another factor was seen as even more critical to the yacht’s success. “We proceeded with the idea that you should have an uninterrupted view of the sea anywhere on the boat,” said Mazzeo.

Bolide combines three main features, first and foremost being the thousands of square feet of glass. Exclusiva’s designers also wanted to ensure that the yacht’s innovative decor—much of which will be made in-house when the concept finds a buyer—all led in the same direction: to the comfort of the owners. That resulted in the private owner’s deck with an expansive, full-beam bedroom, full gym, spa, dressing room, multiple terraces, and Jacuzzi. Bolide’s guests will do very well, too. Five VIP suites on the lower deck offer privacy and, like the master apartment, unbroken views of the water.

Beyond luxury accommodations, three pools are strategically positioned across the yacht. The largest swimming pool on the aft deck can be transformed into a dance floor or party platform, with a cover that rises from the bottom of the pool to sit flush with the deck. Mazzeo’s third design goal was to integrate the interior and exterior. The design team did that with the floor-to-ceiling windows, foldout terraces, and 6,500 square feet of usable floor space. “We wanted coming in from the outdoors to feel seamless,” said Mazzeo. “It does, with so much glass. On the upper deck, for instance, you have the impression of being completely surrounded by the sea.”