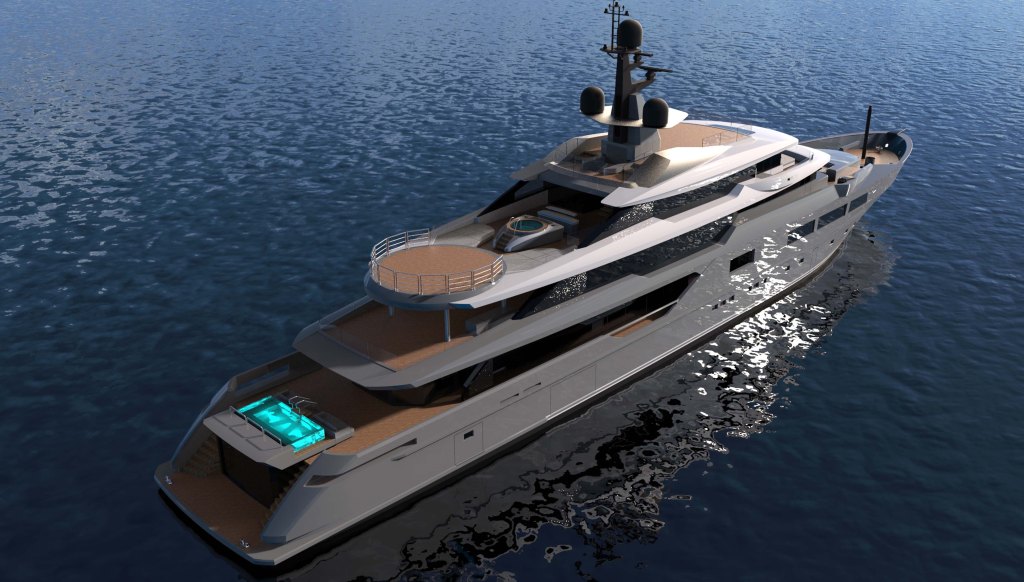 Tankoa’s new 236-foot superyacht Solo, due to launch in several weeks, will make its public debut at the Monaco Yacht Show in September. Tankoa’s award-winning Vertige, about 10 feet shorter, was the template for Solo. The Genoa, Italy, shipyard wanted not only to create a longer yacht with significantly more volume for the owner, who owned a previous Tankoa, but to move in a bold, new direction with the larger yacht.

Using underwater exhausts rather than a traditional through-hull system gave designer Francesco Paszkowski more area across the yacht to design the interior and exterior spaces. They include a larger winter garden, wider aft deck (with a 20-foot transversal pool), and a wide-body upper deck that holds a larger panoramic saloon. Margherita Casprini did the interior design, focusing on warm, contemporary decor including details like Fendi Casa tables. The designers also used glass bulwarks for unobstructed sea views from the saloon and staterooms.

Solo will have six staterooms for 12 guests, including a master suite on the private owner’s deck, a VIP suite, and four double cabins. The owner’s deck has niceties like its own study, fold-out terraces, direct access to the touch-and-go helideck, and a private exterior deck with its own Jacuzzi, bar saloon, breakfast nook, and day head with shower. The massage room in the beach club and owner’s study can also be converted into two more cabins for staff because both have en-suite bathrooms.

The yacht’s large beach club includes an oversized glass-walled gym and fold-out terrace, bathroom, sauna (with its own fold-out terrace), and hammam. There’s also a relaxation area with sofa, bar, and television. The tender garage has been moved forward from the stern, divided between the foredeck and a side-loading garage with room for two 24-foot tenders, personal watercraft, and a rescue boat.

The new Tankoa won’t be just for the owner’s use. Solo was also designed for charter and should be placed in the Mediterranean fleet. The yacht will be powered by twin 3516 Caterpillar engines, giving it a top end of 17 knots. At 12.5 knots, the boat will have a range of more than 6,000 nautical miles.