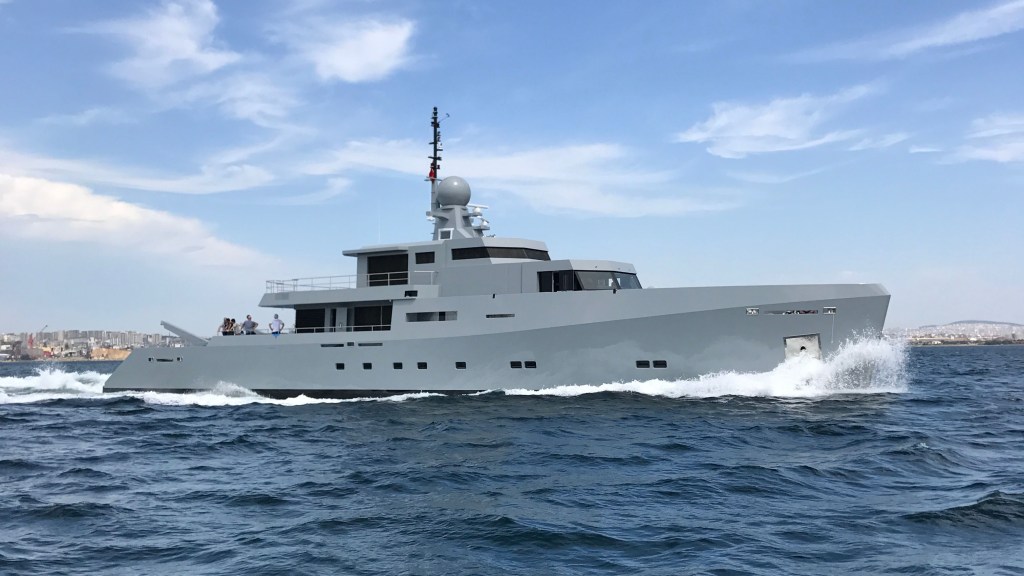 Tansu recently launched a very special 143-foot yacht, just in time for the builder’s 20th anniversary. Cyclone shares a similar angular, sci-fi, military look of Tansu’s recent launches, the 129-foot Sexy Fish and 128-foot Echo-R. Tansu’s new flagship carries it even a step further with its battleship-gray exterior. But what looks like a futuristic naval vessel has a spacious, elegant interior, with a beam of 27 feet. Diana Yacht Design in the Netherlands did the naval architecture, creating a seaworthy hull that reaches a 21.7-knot top end with twin 1,900 hp Cat C32 diesels. The yacht’s cruise speed is 16 knots, with a range at 10 knots of 2,700 miles.

Riza Tansu, the shipyard’s principal, is a Renaissance man who not only oversaw the yacht’s wood-and-composites build, but created the Cyclone concept as well as final exterior and interior designs.

Cyclone has accommodations for eight in four suites. The master suite is on the upper deck, allowing for maximum privacy and the finest sea views. The full-beam quarters include a large en-suite bathroom and an aft deck that offers privacy for the owners. Two double guest cabins and a large VIP suite are located on the lower deck. Separate crew cabins—including a private cabin for the captain, crew mess, and galley—cater to the five crewmembers.

The bridge deck has a large saloon and dining area, with a terrace just outside the saloon for alfresco dining. The saloon also has a day head, a huge plus for a yacht of this size, and library. The yacht’s aft deck makes for a large sunning area, and a signature beach club that runs down to the swim platform at the transom. The boat also has two tenders, including a 20-foot Rupert R6 “Tansu Edition” and a 14-foot Zodiac Pro tender. Cyclone will make its head-turning debut, much as its sisterships have done, at the Monaco Yacht Show.