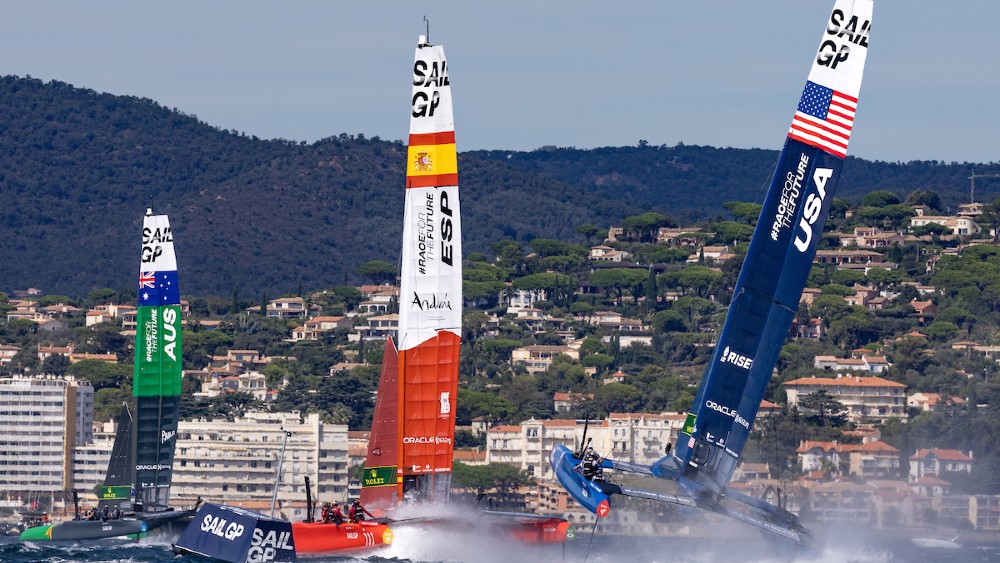 The first day of racing in St. Tropez was marked by winds of 40 knots—so windy that the UK team set a new speed record, which the French then broke at 99.94 kmh (62.099 mph). The boats, powered by carbon-fiber wings, are designed to race at three times the wind speed. The second day was marked by light winds, so much so that the last race was called off because the teams couldn’t complete the circuit in the time required by the regulations.

The US team (foreground) won the series with a consistent performance in the extreme conditions.  Courtesy SailGP

But the Americans, lodged near the bottom of the season’s rankings, had another reason for celebrating. They seemed to be stuck in a permanent rut, despite a strong roster of pro sailors. Their miserable race in their homeport of Chicago in June seemed to still haunt them. “Certainly all the fans deserve better,” said CEO and driver Jimmy Spithill after that race. “We’re going to regroup, learn the lessons and move on.”

Spithill seemed like a new man yesterday on the winner’s podium. “It’s a sign of strength for the team to get out there on Saturday and then again today in completely different conditions,” he said.

Team USA celebrates its first win. The start of a rally?  Courtesy SailGP

The win this weekend was more about consistency than brilliance. New Zealand won two of the three races on the first day, with series leader Australia winning the third. But US team placed in the top three of every race, racking up points towards the final.

Morale was most likely helped by the US team’s two wins over Australia earlier in the week when the Americans hosted Formula 1 drivers Max Verstappen and Sergio Pérez in a publicity match. Spithill had joked that maybe the two F1 drivers should join the team. But beating the league champ seems to have given the US team a sense of confidence.

On day two, all eyes were on New Zealand, which had won 9 out of the last 11 races in Plymouth, Copenhagen and day one of St. Tropez. The Kiwis were considered the team to beat, with Australia suddenly on its heels. The light breezes added to the American team’s fortunes. They won the only fleet race before the final—the second was terminated because nobody could finish under the 14-minute window, and the third was cancelled.

The US team then clinched the final, beating New Zealand and Great Britain.

Day one’s racing was in some of the windiest conditions the series has seen. The Spanish team taking the brunt.  Courtesy SailGP

Spithill said that negative talk regarding team changes and its lackluster performance had little impact. “I’m just really proud that we didn’t let it affect us, and just focused on getting out there and taking it race by race,” he said. “The entire squad has a lot of confidence coming out of this event.”

The race was a start for the American team, but they are still in seventh place out of nine teams. Australia remains in number-one position, with New Zealand only one point away from the top slot. Great Britain, which has suffered several serious crashes this year, is in third place. The Spain Sail Grand Priz Anadlucia-Cádiz will take place September 24-25.