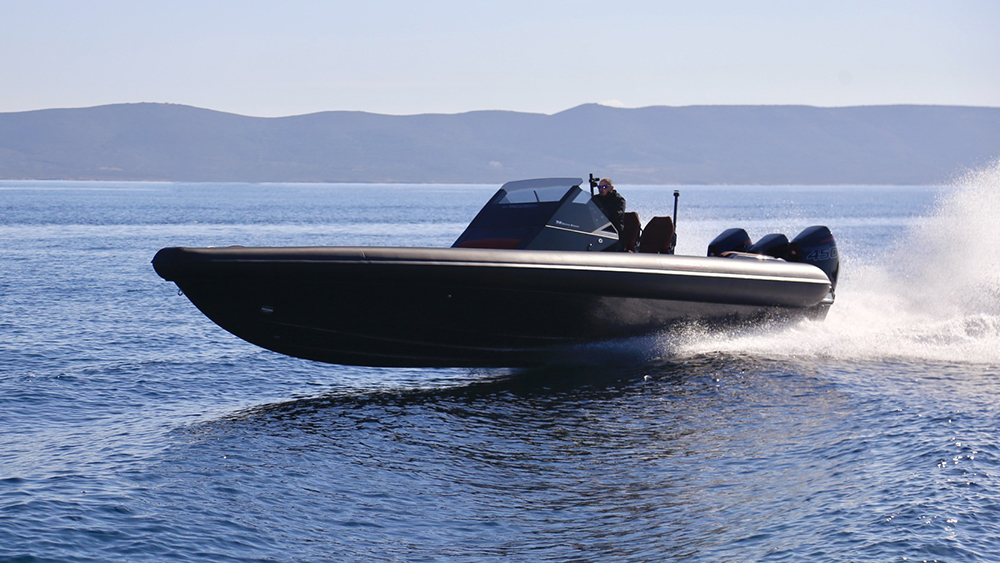 The Greek yard, known for building high-powered luxury tenders, has just unveiled a new 38-footer that is capable of reaching more than 100 knots (115 mph) at full tilt. In fact, the new special addition, which is known officially as the 38 Grand Sport Super Fast, has been fittingly described as a “rocketship” by Technohull.

At the heart of this 7,000-pound speed machine is three Mercury 450R SM outboard engines that collectively churn out a bonkers 1,350 hp. That makes the Super Fast more like a race boat than a leisurely limousine. For those seeking slightly less speed, the standard version of the 38 Grand Sport that was unveiled in 2019 can be fitted with twin engines that enable a comparatively modest top speed of 78 knots (90 mph).

The Super Fast can hit speeds in excess of 100 knots.  Technohull

Adding to all that power is the tender’s dynamic silhouette. Like the standard model, the Super Fast sports a deep-V Dynastream hull with ventilated steps that was developed over five years. Technohull says the hull cuts through waves and deflects spray, while also providing a cushion of air to reduce friction and absorb shock. That’s vital when tearing it up at 100 knots.

“Even at her 100 knot top speed, control is absolute, with a balanced helm and smooth maneuvering,” the yard said in a statement. “Add to that the extreme seaworthiness of this offshore-rated hull and you have a recipe to satisfy even the most demanding speed freak.”

The tender has a range of well over 100 nautical miles.  Technohull

To top it off, the Super Fast is fitted with a 590-liter fuel tank and has a range of well over 100 nautical miles. That’s more than enough for a few high-speed joyrides.

Onboard, meanwhile, you can expect Technohull’s trademark elegance and superyacht-like finish, with teak decks and premium upholstery in a color of your choosing. The boat is available in both open console or hardtop form and comes with a lengthy list of optional extras, from bathing ladders to underwater lighting. It’s also equipped with shock-mitigating bucket seats and an ergonomic helm designed to improve the cruising experience.

“There can be no more special edition for a true lover of ultra-fast boating,” the yard adds.