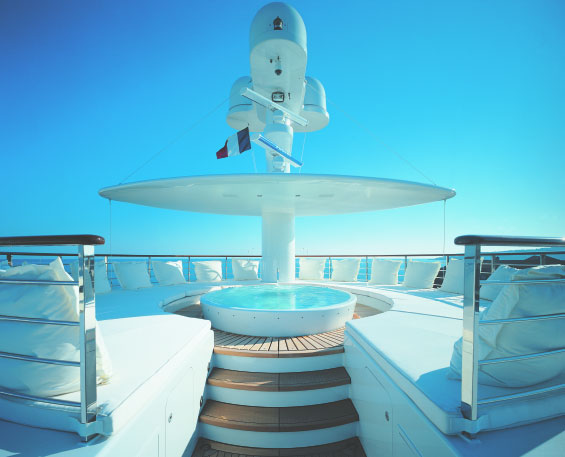 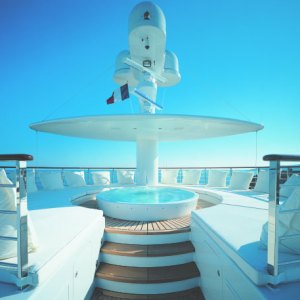 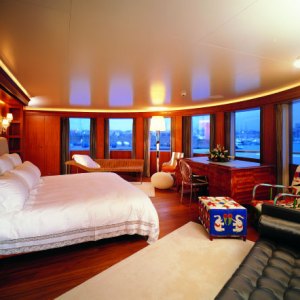 There is no escaping the work of Philippe Starck. The Frenchman has designed everything from toothbrushes to South Beach hotels and Aprilia motorcycles to European disposal sites. Given his expansive portfolio, it is surprising that Starck had never designed a yacht. “I am an environmentalist and a left-winger,” Starck explains. “Yachts are among the daftest capitalist toys imaginable.”

In 1999, however, Starck considered designing a 213-foot Feadship. When confronted with the realization that the owner would have her Feadship built with or without his input, Starck recanted his disdain for fossil fuel– consuming ocean vessels and accepted the commission. “I decided I might as well at least help her create something different—a yacht that is not a mountain of gold,” he says. The result is Wedge Too, the largest yacht ever built by Feadship. De Voogt Naval Architects contributed their services, and the yacht was completed at Holland’s De Vries Shipyard.

When news of the Starck/Feadship collaboration began to spread, at least a few words of doubt were heard, most of them concerning presumed clashes between the mercurial Starck, with his penchant for the outré, and the staid craftspeople of De Vries. But accord-ing to Feadship Director Henk de Vries III, the relationship was harmonious. “The chance to work with Philippe Starck was very special to me,” says de Vries. “I’ve long been a great fan of his work, but he never struck me as the sort of person to become involved in designing a luxury yacht.”

However, the collaboration did encounter several hitches. “As builders with experience of what is sensible on a superyacht,” de Vries acknowledges, “we did stand our ground on a few points.” For instance, De Vries’ leaning toward the sensible is apparent in Wedge Too’s exterior, where the wheelhouse is clad with durable oiled teak rather than the mahogany that Starck proposed. Starck’s handiwork is evident throughout the interior, though, where he was given free rein to, as he says, “go crazy on the details and the furniture.”

One of Starck’s trademarks is an almost Dadaist delight in odd juxtapositions. The owners’ stateroom is furnished with a traditional Louis XVI writing desk—in which Starck integrated a 52-inch plasma TV. In the main lounge, a large thronelike seat features silver swans as armrests. At dinner, guests can sit on a banquette, a plastic urn, a metal or wooden chair, a cube that looks like an ice block, or a gnome. The family lounge includes a child’s seat decorated with thousands of colored beads depicting elephants, a wooden chair that resembles a wheelbarrow, and an upturned black homburg containing a green apple.

Wedge Too, however, is more than a mere floating platform for a designer’s fancy. Two 2,000-hp Caterpillar engines provide a cruising speed of nearly 19 mph, and the yacht has a range of 5,400 miles.

Starck enjoyed working on Wedge Too so much that his yachting work will continue; he is currently designing a 400-foot powerboat that looks like a cross between a nuclear submarine and a giant house slipper. While the design concept is not a traditional Feadship style, the Dutch company would not be averse to teaming with Starck once again. “He might be a superstar designer,” says de Vries, “but it was delightful working with Starck. I think Wedge Too has the classic simple style he envisioned, and I think we have achieved something quite remarkable.”

This New 272-Foot Megayacht Concept Has a Massive 4,000-Square-Feet Beach Club With Its Own Fire Pit