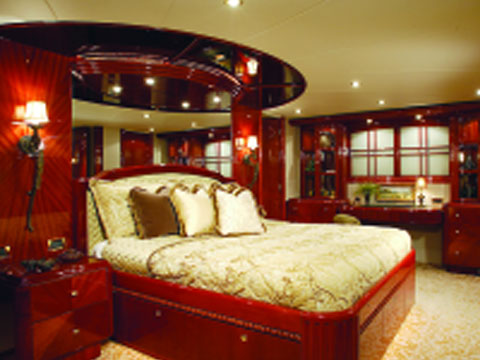 Rainbow Warrior, Jeff Gordon’s nickname, is aptly depicted in his racecar’s garish, multicolored paint job. However, the interior of 24 Karat, Gordon’s 106-foot Lazzara yacht, reveals a surprisingly tasteful, refined side of the NASCAR star. “The inside is warm and soft, using colors like caramel and cinnamon,” says designer Chris DeLashmutt, who worked with Gordon and Lazzara Yachts engineers to create the muted color scheme for what was the second 106-footer off the Lazzara production line. In contrast, Impulse, the first hull created in Lazzara’s 106-foot line, features off-whites and beiges that complement the sunburst patterns of the red-hued Makore woodwork.

Styling, interior design, and performance are all top-notch, but what sets the $8 million Lazzara 106 apart from its competitors is the opportunity for owners to mold their models to their own specifications.

Gordon chose a full-beam VIP suite, which is nearly as large as the master stateroom, for his guests to enjoy. The configuration also includes two smaller staterooms, plus crew quarters. The interior includes a surface of marble veneer that has been melded to a honeycombed aluminum backing. It is the same surface that is found in many business jets. “It’s the thickness of two credit cards, but it looks like conventional marble,” says Dick Lazzara, company president. “It keeps weight down and performance up.”

While the interiors may vary from one 106 to the next, there is no mistaking the signature look of the Lazzara.“The yacht is very dolphinlike,” says Lazzara. “The idea is to portray motion and speed, even sitting at the dock.” The 106 has a top speed of 32 mph, a cruising speed of 26 mph, and a range of nearly 1,000 miles.

The Lazzara 106—and every other Lazzara model—also comes with an exceptional level of service. Engineers from the company board boats once a year to inspect more than 1,200 items, and Lazzara’s Integrated Shipboard Information System (ISIS) checks for malfunctions from its Tampa, Fla., headquarters.

The owner of Impulse experienced an example of Lazzara’s service when an engine on his previous 94-footer seized in St. Martin. The company delivered a new engine to the island, and within days of the breakdown, the yacht was running again.That’s a pit-stop time that even 24 Karat’s owner could live with.