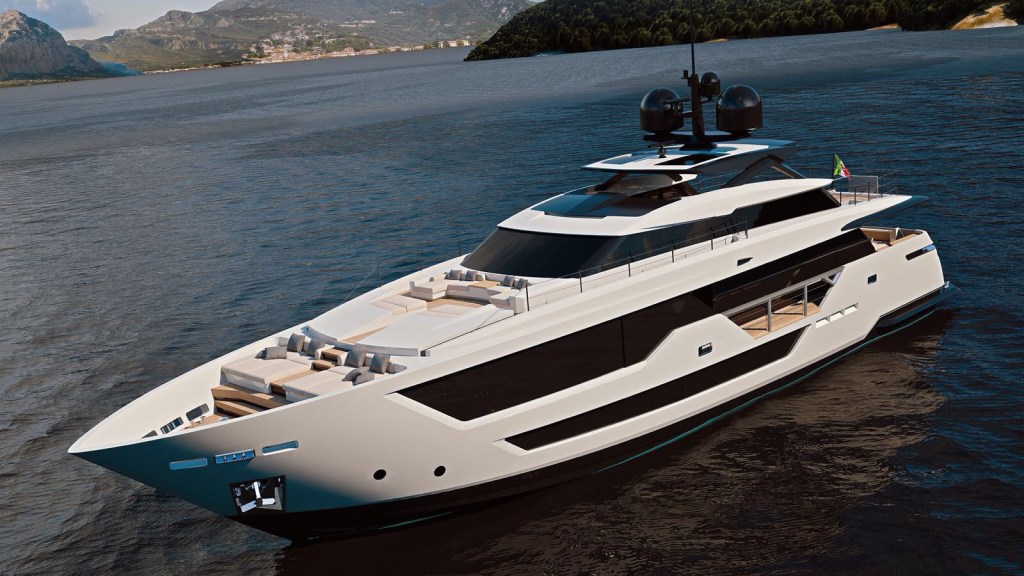 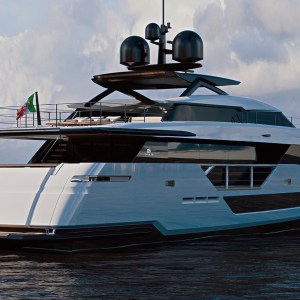 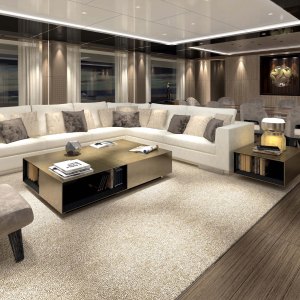 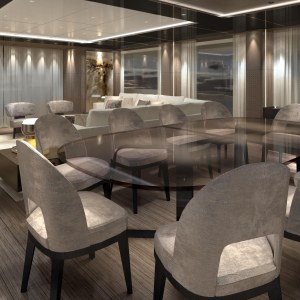 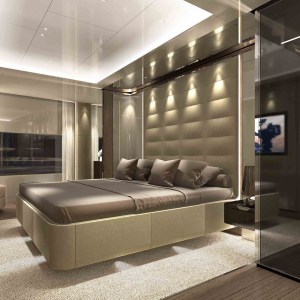 The Custom Line 106 looks every bit as fast as a planing superyacht should. The ultra-modern exterior was designed by Francesco Paszkowski in collaboration with the Ferretti Group’s Product Strategy Committee led by Piero Ferrari (yes, that Ferrari family). Custom Line says this raised-pilothouse design bridges the divide between traditional and contemporary styling, as have most of its recent launches, but this 106 is certainly more adventurous than any other yacht in the Custom Line series.

Paszkowski said that “efforts” had been made to break down the boundaries between the interior and exterior, mainly with larger doors and easier access from outside. There has also been a big effort by the designers to interconnect the exterior spaces (all totaling 2,370 square feet) with more walkways as well as maximizing usable space. The forward area is certainly all about get-togethers, with a raised area that features sofas and reclining seating, and just below toward the bow are giant sunbeds that measure 387 square feet. The forward section also has a walkway back to the flybridge, which is nicely integrated into the design by tinted windshields and the hardtop overhead (with two skylights). On the stern, the 106 has the most advanced version of Ferretti’s Dual Mode Transom, which allows the garage to be flooded for easy launch of the tender (no hoisting out and over the swim platform). This 106 also has nifty sections that automatically cover the sets of stairs down to the transom, giving the stern a seamless look when it’s underway. A second garage, for a second tender or three-person jet-ski, is located along the side of the hull.

Paszkowski also made excellent use of the interior space, designing a full-beam (21-foot-4-inch-wide) master suite on the main deck, with two dressing rooms and a very generous bathroom that features his-and-her toilets/bidets on either side, with a large shower in the center. The lower deck has four staterooms: two VIP cabins amidships and two twins forward. There are also separate crew quarters for the captain and two stewards.

There is a formality to the interior, best reflected in the main saloon, with a lounge area and formal dining section, defined by the darker woods and upholstery. The saloon’s windows are floor-to-ceiling for natural light, and Custom Line will build an opening in the center window with an electric opening mechanism for those who relish ocean air. The same support columns from the 106’s bigger sister, the 120, have lighting, audio, and air-conditioning functions for the saloon. Software accessed via iPad allows owners and guests to control the entertainment system in the lounge. The system can be extended across the yacht for control over individual staterooms.

The standard 2,217 hp MTU 16V diesels give the boat a top speed of 23 knots, while the upgraded 2,638 hp MTU 16V engines push it to 26 knots. Electrohydraulic stabilizing fins for controlling motion while running and at anchor are standard, while owners can also opt for gyrostabilizers for extra stability. The 106 is expected to make its debut later this year.