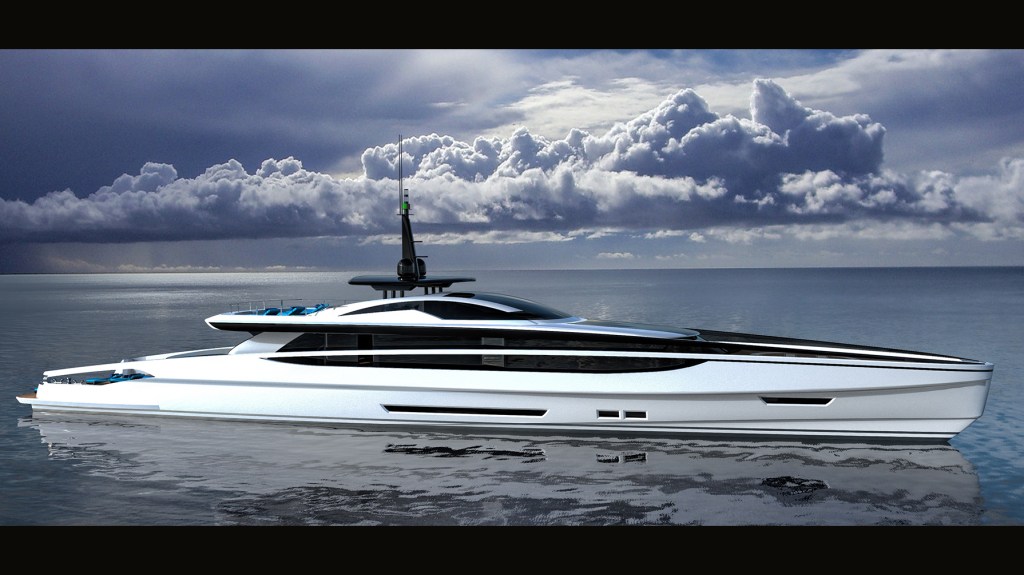 Great minds think alike. Van Oossanen Naval Architecture has collaborated with Italian designer Federico Fiorentino on a new 156-foot concept called the Fast Displacement XL-300. The new design pairs Van Oosanen’s patented FDHF (Fast Displacement Hull Form) with an exterior by Milan-based Fiorentino to create a yacht that is 20-percent longer than other yachts in its class. The XL-300, with its 30-knot top speed and double-digit increase in interior volume, was designed specifically for Ocean Independence for the U.S. yachting market.

“Our new XL series offers maximum length, superior comfort and the highest performance,” says Perry van Oossanen. “It gives the possibility to create the longest yachts ever within the 200-, 300-, or 500-gross-ton boundaries.” Van Oossanen says that 20 percent extra hull length will provide 10 percent more interior space, along with a noteworthy 30-percent to 40-percent increase in exterior deck space. Think swimming pools, helipads, and extra social areas, along with an exponential increase in comfort levels in a much smaller hull.

Fiorentino’s sleek, contemporary exterior will maximize the use of the large open spaces. Interior designer Cristiano Gatto will create the interior deecor for the XL-300. The XL’s five staterooms include an owner’s suite on the main deck as well as three cabins with double beds and a cabin with a twin on the lower deck. Crew quarters for six will be located in the bow area.

The yacht will have a helipad on the foredeck, an unheard-of feature for a yacht this size, as well as an infinity pool on the aft deck. The side-loading tender garage can carry a 21-foot tender and two Jet Skis.

Van Oossanen says the yacht could be built from aluminum to Lloyd’s and ABS standards, compliant to LY3. Twin 2,600 hp MTU diesels would provide a top speed of 29 knots. At 12 knots, cruising range would be 3,500 nautical miles.