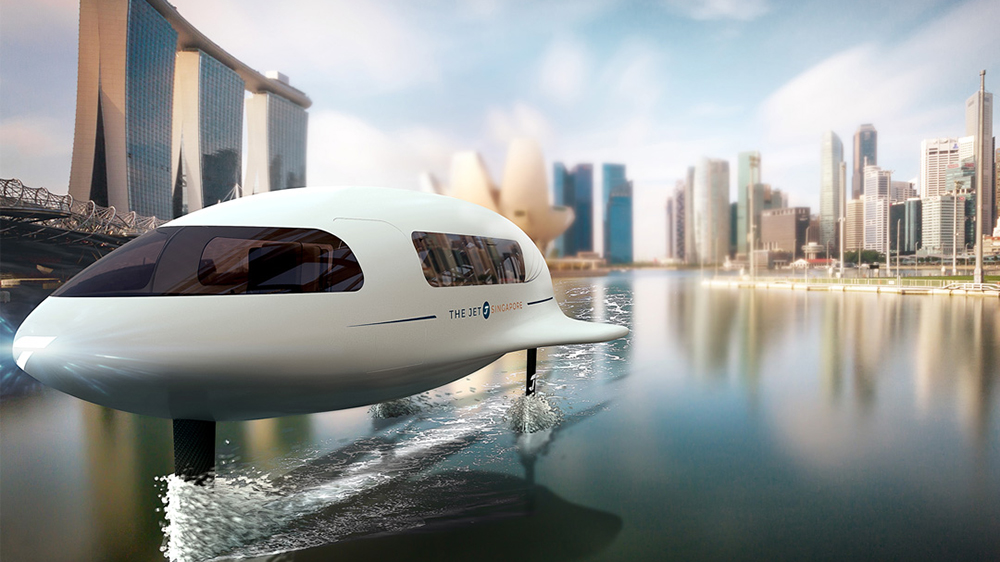 A “flying boat” may sound like an oxymoron, but a certain Swiss start-up is ready to prove otherwise.

The Jet ZeroEmission is launching what it claims will be the world’s first hydrogen-powered flying boat next year in Dubai. The startup has partnered with Zenith Marine and DWYN to build the new zero-emissions vessel, which has been fittingly christened the Jet.

With a futuristic, spaceship-like silhouette, the yacht will measure roughly 33 feet from tip to tail and is designed to carry up to 12 passengers and a captain. As its moniker suggests, it can soar like a jet, too.

That’s all thanks to the Jet’s hydrofoils, which will essentially lift it up 3 feet out of the water to ensure less resistance than a normal planing boat. Foiling also makes for a smoother ride with less wake since you’re flying above any choppy seas.

The Jet’s creator and designer, Alain Thébault, with a model of the flying boat.  The Jet ZeroEmission

The Jet’s propulsion is just as forward-thinking. It will be equipped with two hydrogen fuel cells that will power the electric motors for quiet, emissions-free cruising at zippy speeds. According to the Swiss outfit, the Jet will reach around 18 knots during take-off and sit somewhere between 35–40 knots while cruising. It will mainly be dedicated to serving hotels and high-end clients, according to the brand.

It’s worth pointing out that pairing hydrofoils with hydrogen is not exactly a new concept. There has been a spate of designs that combine this bleeding-edge tech. In fact, Emirates Team New Zealand is building a hydrogen-powered foiling chase boat to support the AC75 racing yachts in the 37th America’s Cup.

The Jet can reach 40 knots at full tilt.  The Jet ZeroEmission

Still, the Jet ZeroEmission is gaining serious momentum. The company, which is led by noted yachtsman Alain Thébault, has already secured part of the required funding of $11.4 million (€10 million). Thébault brings a wealth of experience to the project, too. The Frenchman previously designed and constructed a hydrofoil trimaran called L’Hydroptère in which he set a world sailing speed record back in 2009. As you might expect, he’s excited by his new projects.

“We are pleased to make this announcement from Dubai, and be able to manufacture and launch ‘The Jet’, which is going to be the world’s first boat to sail without noise, waves, or emissions,” Thébault said in a statement.

The Jet is slated to take its first flight during the COP28 UAE climate conference in Dubai in November 2023.