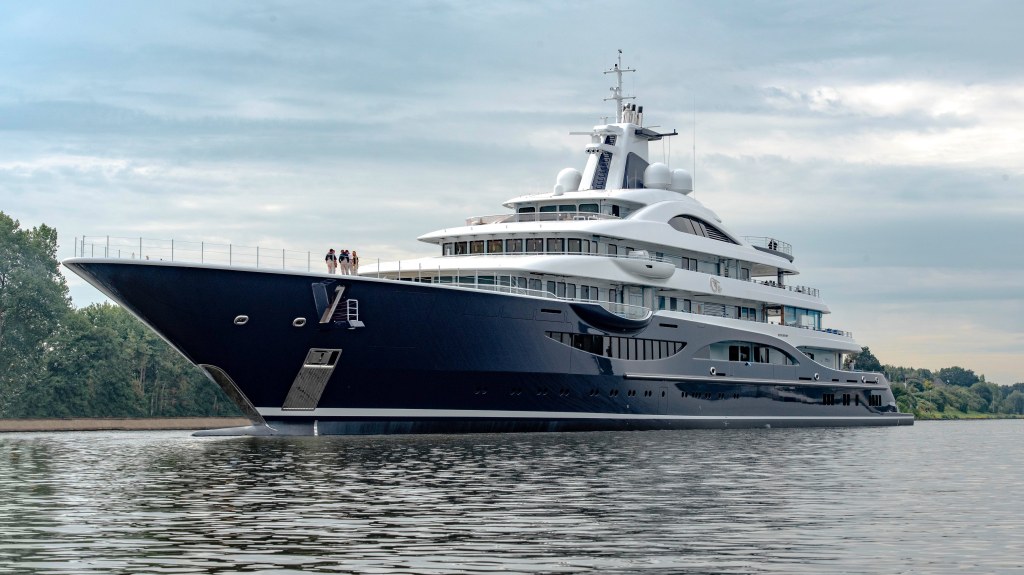 Tis is a very small name for what turns out to be a very, very large yacht. The 364-footer was launched by Lürssen Yachts on Monday, as part of the multiyear build process. The German builder expects to start sea trials in October and eventually deliver the yacht to its owner at an unspecified point over the winter.

The Winch Design is long, lithe, classic, and simple-looking in an elegant way, especially for a gigayacht of its substantial length. Winch did a masterful job of keeping the profile balanced and seemingly low to the water. He did this partly by giving the upper decks plenty of exterior space, fore and aft, so the yacht does not look dense, like many stacked, wedding-cake yacht designs. The navy-blue hull also has an unusually long foredeck compared to most contemporary gigayachts, so the profile once again seems slender, rather than heavy. The stern also ends relatively close to the water, with a soft tumblehome design that is more common on 30-foot motor yachts.

The decks flow upward in a nice proportional stairstep pattern at the stern, while the curves in front soften the profile. The tasteful cutouts along the shearline fuse the deck and superstructure aesthetically, giving Tis a distinctive profile that nobody will ever mistake for another yacht of its stature.

Lürssen remains mum about the interior or any other significant details of Tis, as the builder often does with its new launches, but it’s clear that the yacht’s 55-foot beam and banks of windows across all decks create abundant, light-filled interior spaces. The exterior spaces are likewise plentiful on the top three decks.

This newest launch from Lürssen will fall in the top 35 of the world’s largest yachts. To gain a sense of perspective, look for people standing on the decks. They appear like small dots, which shows just how large Tis really is.