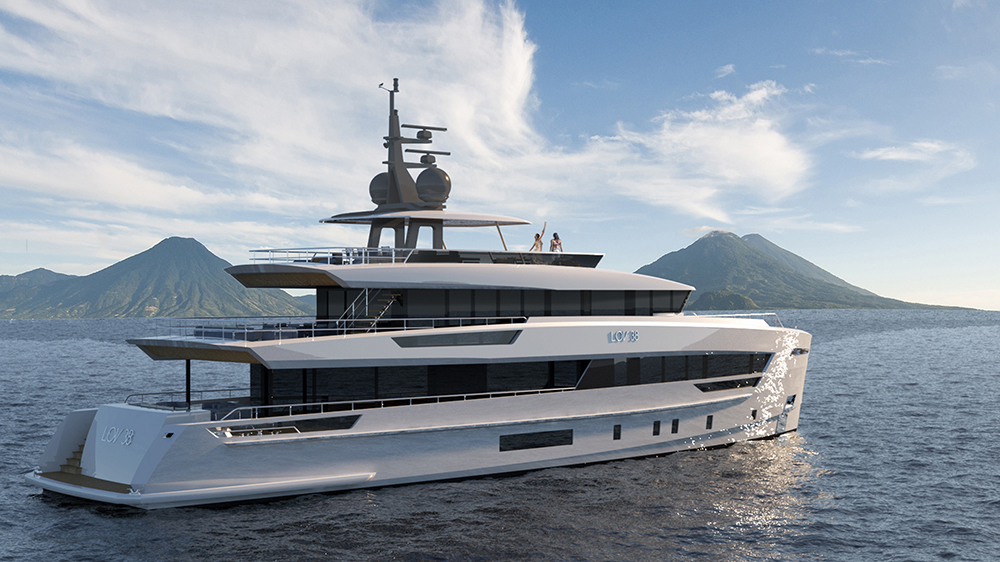 Putting three highly successful leaders in the superyacht sector on the same project, with each contributing their favorite features, could be a recipe for disaster. Egos could explode and the features could explode with them. In the case of the LOV 38 concept, the result is a well-proportioned yacht with amenities that the team sees as fundamental to living the good life on board. The design, in fact, is all the more impressive considering the number of features designed into the 125-foot-long hull.

The LOV 38 is the joint brainchild of three highly respected companies in the Netherlands, ground zero for custom yachts. Lynx Yachts, Omega Architects, and Van Oossanen Naval Architects used the first letters of their names to spell out LOV, but the 38 includes their collective knowledge in yacht building and design. “The cooperation between us is a perfect triangle,” says Frank Laupman, founder of Omega Architects. “Lynx is a new Dutch shipyard that offers high-quality builds for the market gap in the 30- to 40-meter class. Our design studio delivered an appealing exterior and interior proposal that is both functional and versatile.” Van Oossanen’s Fast Displacement Hull Form gives the concept a fast but efficient running surface that is also highly stable in rough seas.

The superyacht has a modern profile with a plumb bow and full-height windows in both the skylounge and main saloon. Its abundant outdoor spaces put the fresco in alfresco. There are two exterior dining areas, one aft of the main deck and the second outside of the wheelhouse (a third indoor formal dining area is standard). An area up front is a great social space, with a large lounger and Jacuzzi. The beach club at the rear is designed to be multifunctional, equally useful for guests who want to step off the back into the sea, but with housing for the tender and water toys. The club includes a bathroom and dive center.

The designers incorporated a full-beam master suite with large balcony on the main deck, along with the options of four, five, or six guest staterooms. The six-stateroom configuration is for charter use, while fewer-but-larger cabins are optimal for families. Besides the balcony, the master suite also has an office, vanity, dressing room, and his-and-her bathrooms.

The skylounge comes with choices as well: Clients can choose it with either a service counter or a game table—or without, for more open space. The designers also provided the option of replacing the skylounge with an owner’s deck and terrace, thereby super-sizing the owner’s total space with the stateroom on the main deck. The LOV 38’s twin 2,000 hp MTU diesel engines give it a top-end speed of 21.7 knots, with an efficient ride at a lower cruise speed. The FDHD hull deliver 20 percent less resistance at speed, with more comfort in waves and at anchor.