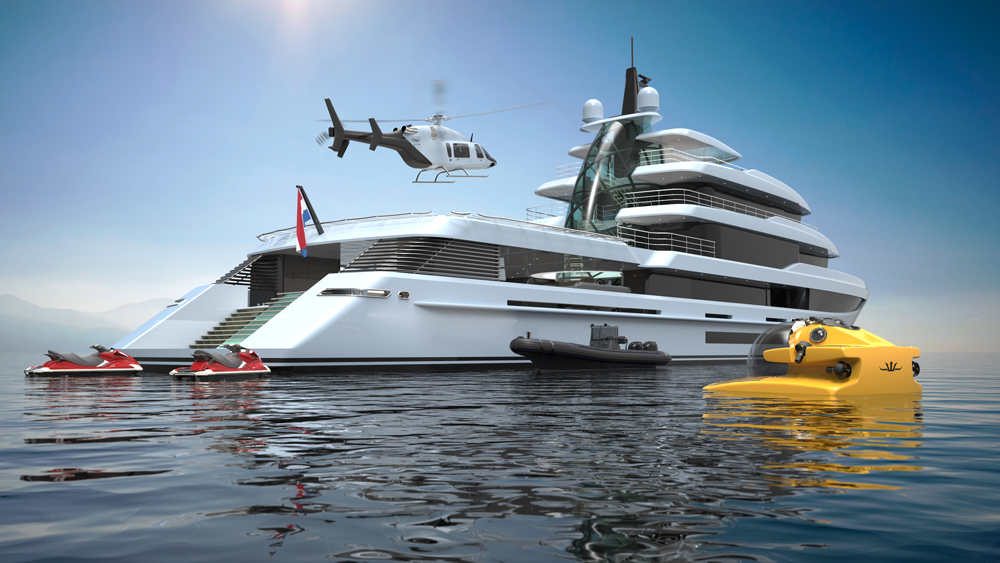 Dutch firm Mulder Design—which has in the past penned designs for the likes of Sunrise, Baglietto, Heesen, and Benetti—took the wraps off of a new yacht concept that we’re hoping against hope to see on the water someday. Dubbed Project Crystal, the 229-foot adventure yacht design is rated for ice and has tons of storage space for the toys you need to explore whatever destination you find yourself in.

The Mulder team (which also worked on Zeelander’s Z55) gave the concept an especially intriguing silhouette; instead of the stepped design often seen on yachts this size, Project Crystal has what looks like a truncated superstructure that leaves the rear of the boat open for a helicopter landing pad (a feature positioned towards the bow on most yachts). Thanks to all that room, at the aft end of the superstructure, Mulder’s designers placed a large, enclosed glass stairwell that runs from the main deck up to the sun deck like the boat’s twisting spine. There’s also a central staircase running through the center of the boat.

Up on the sundeck, guests can dine under a retractable sliding roof, lounge around in the ample seating, or soak in the hot tub. However, guests need stop on the next deck down, as it is entirely taken up by the owner’s suite, which has an office, lounge, his-and-her bathrooms, and a massive bedroom. The next stop on our tour is the observation deck, which has the seating typical of most observation decks, but also another dining table, a bar, a wine cabinet, a cigar room, and a fish tank.

Continuing along, we get to the main deck, an area that features the main saloon (with a piano), dining room, library, and dedicated cinema as well as two VIP cabins. Head outdoors and you will begin to see why they designed the yacht with so much aft room. An expansive tender deck with room for four PWCs, a tender up to 34-feet in length, one up to 20 feet, and a three-person submarine can all be stored there. The rest of the cabins, two twins and two VIPs, are located on the lower deck, as is the gym, sauna, and massage room, so you can really get centered and calm after a day of relaxing.

All told, the yacht will be able to accommodate up to 14 guests and can support from 15 to 18 crew members. And if you’re a do-gooder type or just want to save money, the yacht concept would use a hybrid electric-diesel propulsion system that can bring the yacht up to 18.5 knots but also run completely on electricity at up to 12 knots.