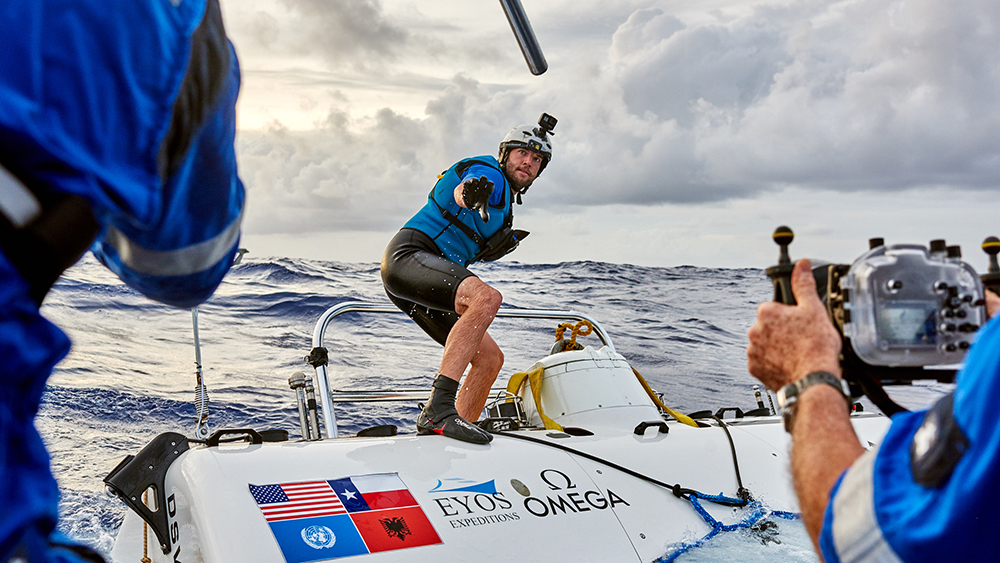 There are times when it feels like writing that outsized check might sink you. In the case of the “Ring of Fire” expedition, you will literally plummet to unimagined depths, while simultaneously watching your profile lifted to new heights.

EYOS Expeditions and Caladan Oceanic, which partnered on last year’s Five Deeps Expedition, are offering a similar opportunity for three intrepid travelers, who will be known as “Mission Specialists,” to dive the Mariana Trench, the deepest point of any of the world’s oceans.

“These Mission Specialists will step into the history books for being among the first 15 humans to reach the bottom of the Mariana Trench,” says Rob McCallum, founding partner of EYOS Expeditions. “This is the most exclusive destination on earth—only three manned expeditions have ever been made to the bottom of Challenger Deep. More people have been to the moon than to the bottom of the ocean.”

The research vessel, DSSV Pressure Drop, hosts a scientific expedition that will allow three fortunate civilians to do the deep dive.  Reeve Jolliffe

For perspective, about 4,000 people have trekked to the top of Everest and 562 have been to outer space, but only seven souls have traveled to Challenger Deep, the lowest point in the Mariana Trench, 35,853 feet deep below sea level.

Caladan Oceanic, an undersea exploration company in the middle of a round-the-world mission to gather samples of unknown species and map ocean-floor surfaces, and EYOS Expeditions are auctioning off three spots for the world’s deepest dive in June.

The dive portion is part of the longer six-month Ring of Fire expedition. The Mission Specialists will board the 224-foot hadal exploration vessel, DSSV Pressure Drop, in Guam, reaching the Mariana Trench after a day of ocean travel. The vessel’s submersible, Limiting Factor, has already dived five times to the bottom of the Mariana Trench. The two-person submersible, designed and built by Triton Submersibles, was pressure tested to a depth of 14,000 meters.

Only 15 people will have visited the Challenger Deep by June, as opposed to 562 who have been to Outer space and 4,000 who have summited Everest.  Reeve Jolliffe

Each dive, which will include a Mission Specialist, will take up to 14 hours. The seven-mile descent requires four hours. The divers will then spend up to four hours on the seafloor, where they might see and film some of the most extraordinary species on the planet. The return involves a four-hour ascent to the surface.

The voyage in Limiting Factor requires no special training (beyond an orientation upon arrival) and those inside experience no pressure changes or physiological stresses, according to EYOS.

During the expedition, the participants “will be fully integrated members of the team and free to work alongside our sonar operator/ocean mappers, submersible technicians, film production team, expedition management and ship’s officers to gain an insight into the complexities and challenges of hadal exploration,” says McCallum.

The science team, which is led by Dr. Alan Jamieson from Newcastle University, will continue to collect samples and shoot videos, while Limiting Factors’ sonar will produce high-resolution 3D maps. Last year, the Five Deeps Expedition identified 40 new species during a similar expedition to five of the world’s deepest ocean trenches.